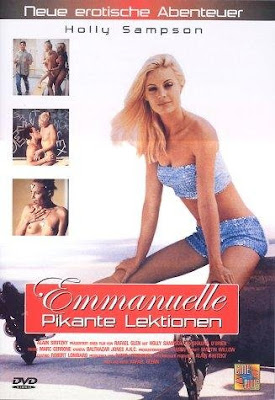 After a rousing HALLOWEEN HORRORS 2012, I turn my attention to other trashy matters.  I'm a pretty curious fella by nature, so I'm diving into the EMMANUELLEVERSE, a treacherous and bizarre land of nudity, mild profanity, trash cinema from all over the globe and a ton more "exploitation" of a name than most any other series I can imagine.  First up, I had to look at EMMANUELLE 2000 which is subtitled EMMANUELLE PIE!!!
Yes, a sex comedy.  But this is interesting!
There are tons of attractive women, there is lots of nudity and some shockingly funny parts. I mean that, I was chuckling during a lot of the intentionally funny bits. Director Rolfe Kanefsky has done films like THERE'S NOTHING OUT THERE (which is great by the way), THE HAZING (love that one too) and... a ton of other stuff.  As it turns out he has two films called PRETTY COOL 1 and 2.  Emmanuelle Pie is a re-edit slapping Holly Sampson in as the digital body swapping device owning Emmanuelle (the machine is out of control it seems, and she has to chase it down) pop into the first film and alter the plot to fit the minimal connection.
I'm good with that!
Plot, schmot...this is fun, explicit and sort of demented stuff.  I actually want to see the originals now, which says a lot I guess.  I bet Pretty Cool 2 is in an Emmanuelle setting--lets find out.
Here is the opening sequence of E2K which should give you a decent enough feel for what they are peddling!

Bring it on EMMANUELLEVERSE!!  As a boner bonus in this one, Cecilia Bergqvist from the films Farlight Forflutet and ENGINE TROUBLE / JUNIOR is on hand and using her hands on her self. A lot. I'm good with that!
Viva Emmanuelle!
And here is another clip featuring Holly Sampson!