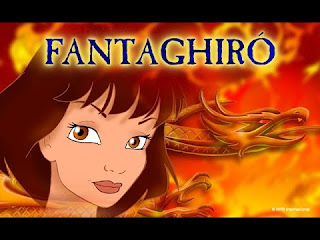 I love the FANTAGHIRO series of television films produced and directed by Lamberto Bava. A mix of kiddie fantasy with European Trash Tropes and stars like Kim Rossi Stuart, Alessandra Martines, Brigitte Nielsen (as a wicked queen!!), Mario Adorf and more show up and the fairy tale story is brought to life with creature effects by Sergio Stivaletti!   After years of tracking them down in English dubbed movie versions, including CAVE OF THE GOLDEN ROSE, I was stunned to see an animated version had been produced. Some even exist in English.  So, happy birthday Lamberto, lets watch some really odd stuff you inspired!

First up... the feature length FANTAGHIRO, QUEST FOR THE KUORUM

And here is episode one of FANTAGHIRO...the series! There are even more online in several languages.  It's an enjoyable expansion of the television movies for the few fans that may frequent my blog.  At worst, all you horror adults can expose some kids to the work of the maestro that made DEMONS!