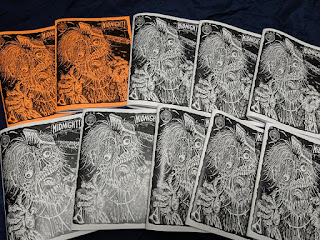 Few things make me happier than wrapping my dingy Dr. Z like tendrils around a new print zine!  It's been a while folks, and I figured this was a good place to start.  After getting a complimentary review copy of MIDNIGHT! MAGAZINE I have to admit it was daunting to pick up the virtual pencil.  Been a few years... I've had a bunch of projects of varying success and failure, and I'll get into all those, but first... I'm rounding up on Midnight, quite literally... but this tome inspired me to get at what I want to do next with David-Z the blogspotter!

MIDNIGHT! MAGAZINE is a nice and chunky black and white affair loaded to the gills with great art for the at first glance look. The cover boggles my mind with it's graven perfection!  Doug Randazzo's cover and inside art is so splattery it hits every grotesquely great spot in my brain.  He is joined by several excellent pencil punishers and Marvel horror fans will eat up the wildly groovy back cover by Don England.  There ain't a bad picture amongst 'em… art fans will enjoy just looking through the pages, highlighted by main man Eric Wright's slick design work throughout.

But it's about the reads, and here is where MIDNIGHT! shocked me to my writing senses.  I have to admit I usually do NOT enjoy pieces written that work more as about the author than the writing itself.  I struggle to do it, instead bending my writing and perspective to serve the subject.  So many articles within these pages work it the other way, it's about the writer and the way the see whatever topic they tackle.  I guess I've done it, but there is usually an artifice that goes up, even just a little. Not so here, and it's inspiring!  I totally enjoyed DAYS OF VIDEO YORE: THE MEDIA EVOLUTION by Vanessa Alucarda.  I got my first job in a video shop in 1985 and worked in VHS, Laserdisc and DVD shops for...wow, 3 decades?  The writing made me see things that were similar, and also placed me in time with where I would have been in this piece (behind the counter, egging on my customers to try MORE HORROR!!).
Ben Newell covers the FRIDAY THE 13th PART 3 novelization, one of those items I had and was lost in a move somewhere along the line, and does a fine job.  On the book front, we also get THE EERIE ONE, Mike Howlett, covering books I need in  my life like MAGGOTS, WORM and TENDRIL!  Damn...as a horror book fanatic, I've never encountered these.  I'll fix that right up!
Comics get a LOT of space, which is excellent, and I enjoyed all the coverage, especially the LAS MOMIAS DE GUANAJUATO article that showed me a whole bunch of things I'd never encountered.  Maybe THIS is why zines that don't hyperfocus are so important, I wouldn't know where else to get this information.

Deep Red editor John Szpunar is interviewed and Kris Gilpin has a vintage interview reprinted that is must read stuff.  WHO was going to direct Cannon's SPIDER-MAN?  And how epic was it to be?  As a part of the DEEP RED staff, it was nice to see both fellas getting space to shine. And there is a lot more... Brad Sykes reviews movies (I've watched some of his!) and an Albert Pyun one to boot.  I still have an Albert Pyun blog to update, dammit.

A class act, I'm not spoiling more, you HAVE TO BUY IT, because if you don't, these things don't exist. I give it my highest recommendation, and I'll prove it.
I love Joe D'Amato films, I have written a lot about the guys work, including a Weng's Chop article that reviewed (if memory serves, and I'm being conservative) over 30 of his 90s porn films. Search this blog, they will pop up faster than Ron Jeremy's dick at a donut shop. I'm a fucking SNOB about D'Amato, which is like being a snob about urinal cakes being scented lavender or lemon. Silly.

I was ready to groan... I'm sorry, I was!  A review of ABSURD by John Shatzer had me ready to toss on my Massacessi Smoking Jacket and get all high and mighty, but nope... I really enjoyed it. A mixed like of the movie was fine, but it is so well put across that this was a blind watch it made me be able to forget the oh... more than a dozen...viewings of the movie I have. I mean, it's one of my favorite of D'Amato horror films.  There is a LOT to cover (pass the spaghetti for a fancy football party, baby!!)--but instead you get a nice look at all the Blu Ray has to offer (which is stunning for the record) and the feeling of chilling with someone that has fresh eyes on something I hold as a sacred cow of slaughter cinema.

Well made, fun to read and it even includes some love for BLACK MAGIC WITH BUDDHA and SKATETOWN U.S.A.!

Get yours right now by clicking here!  You'll stay up late to partake in the manic delight of this MIDNIGHT!