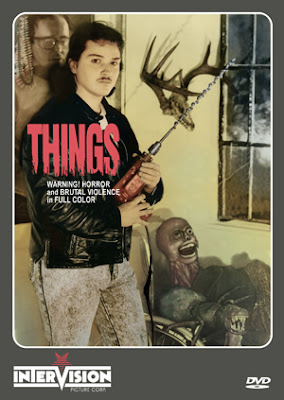 Sometimes amazing THINGS can happen.  The existence of THINGS on a loaded DVD for example. Or moreso, having a few friends by and popping some THINGS like this "film" into the player at random.  THINGS will make fans of weird cinema's thighs weep with joyful sweat.  THINGS will shake your cinematic ass faster than a Bounce singer at WALLYWALLYWALLYWALLYWAL-MART!  THINGS is just that, a THING of pure cinema that is a delicious blend of the shit you always wanted to do, and all the other shit you feared might happen if you did it.
THINGS is fucking magnificent. 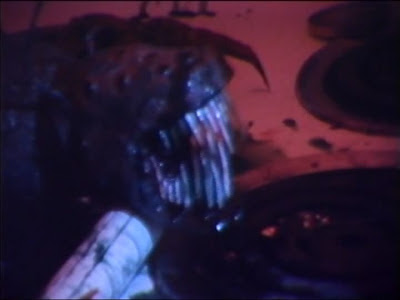 It is almost impossible to really encapsulate what THINGS is about, but lets see what I can come up with. After a mysterious woman in a mask shows us some boobs and begs for a baby (!!) we are brought to the "real world" of THINGS where two guys, Don and Fred, wander around a shabby house and find a potentially demonic book (and tape recorder) in the freezer as they raid Don's brother Doug's house for some brews.  Why not?  It can't get weirder tha...wait...what?  It can?  OH. KAY. 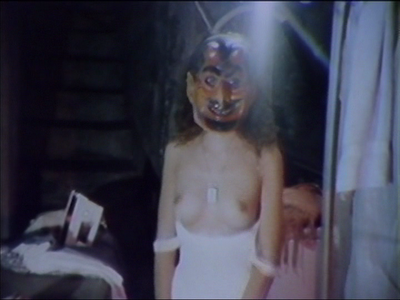 Doug comes home and there is a fluffy dog that wanders around, getting oddball cameos.  A woman explodes and a THING comes out of her. Oh, and then there is a random extended gore scene that makes The Burning Moon look like Spartacus (hey, I'd take the Ittenbach film every day if given the choice) that has the totally no clue what the fuck this guy is supposed to be doing playing a Mad Scientist dude portraying Dr. Lucas killing people. He impregnated Doug's wife mysteriously (THE DEVIL you dumb hosers!) and she exploded.  Yet somehow, finding some bestiality on the television that tunes to different dimensions is more important.  THINGS run around. 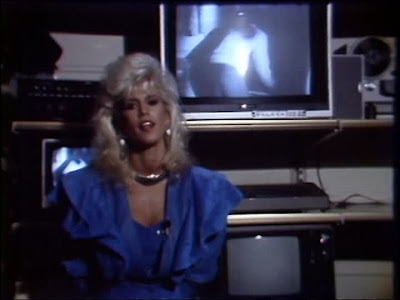 Oh, and Amber Lynn appears reading some cards to her right...I think she is talking about stuff. George Romero comes up...he is apparently trying to sue to get the rights back to Night Of The Living Dead back so people can't abuse it. Note, that is NOtLD playing in the background!  Brilliant.  And Amber looks the most like a Rob Liefeld creation I've ever seen.
There is more stuff, too much to list that you need to experience.  A plugged in chainsaw bug massacre. Gore and eating bugs and farting and watering down beer (fine American Lager!) and people get killed and for some reason Fred vanishes (into those TV dimensions...or getting help though we never see it referenced...or what??)  He comes back. And everyone gets THINGS on their brain.  You can't even take a proper piss in this house without getting a THING on ya!
And this barely scratches the surface. 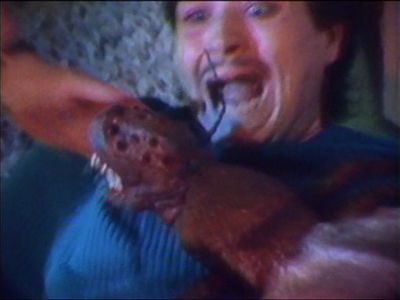 To describe THINGS does it a disservice.  You will either go with it or run screaming in the other direction, but you will not forget the experience. All the sound is post synch and you'll swear that you are losing your mind and blanking out on proper sentence structure as you hear the letters strung together as words and words looped together as sentences.  The awesome sentiments of bug catching and random farting are conveyed with a disconnected style that starts to make sense if you apply the right stimulants to your mind. Cinema is my drug of choice, and this is like getting an eyeball full of accelerant that spins your brain out of control with it's endless potential and utter failures at being a film collide.
But that failure is so fascinating that it becomes it's own piece of outsider art.  There is obvious love for the horror genre here sometimes, but the people behind it seem to be talking through a megaphone with play dough jammed into it.  I have no idea what they MEANT to make, but what they did is something everyone that has ever dreamed of their very own horror film being made needs to see.  You may not even enjoy it, but that is not the point.

It's THINGS and I'm humbled that it exists, and all these years later continues to find an audience and has been digitally preserved and given the GOLD standard treatment by Intervision!  In THINGIAN fashion, I have no desire to break down the special features of the DVD, I'm almost fearful to go behind the scenes here and find out what happened and instead focus on what I got, and will get, from future visits to it's twisted hollows in the Super 8 monster kid world of make believe.  It has it's own vision, it's own language and it's own funk that all of us need to smell to see what we make of it.  THINGS picks it's nose and shoves the snot down your throat, but sometimes it tastes like bubblegum, and other times it tastes like spearmint shit.
I leave you with this early image... we do a tag along with the two dudes headed out for brew and surrealistic mayhem and pass this sigh.  BROKEN ROAD indeed... THINGS is utterly broken, it may even break you along the way. But it will provoke a response and I just can't imagine anyone reading this would be bored by the many sludgy charms it has to offer. 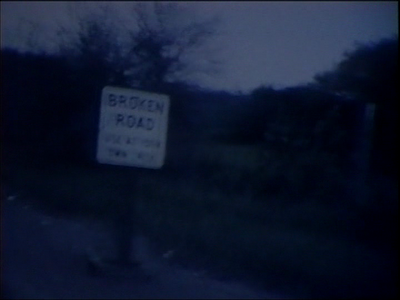 This review is dedicated to the normal and fine souls that survived their trip through THINGS last night...may the damage and flashbacks not last too long!
Posted by David A. Zuzelo at Sunday, October 28, 2012