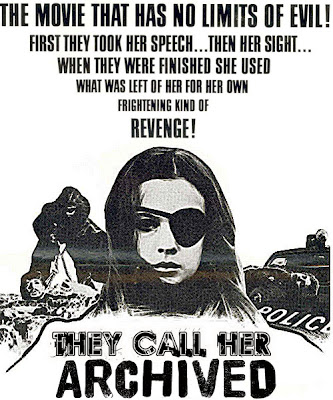 I admit it... I'm obsessed. I love Bo Vibenius' film THRILLER-A CRUEL PICTURE, later re-titled THEY CALL HER ONE EYE (which is a truly great title by the way). Years ago (around late 2000) I was involved in the beginnings of licensing the film for DVD. Of course, that went truly haywire and amok in a tale of bad business, bullshit deals, name calling and pillow partying (???...don't ask...ugh). BUT for every bad thing, like putting my soon to be marriage in peril, losing out on ever seeing a single penny in hopes of preserving the film and so on, there was GREAT things. Sitting with Bo Arne Vibenius in his Stockholm apartment and screening the film (as well as the truly awesome Breaking Point) and getting a personal commentary track. The Swedish Shinobi, Fred Anderson, and his mirth and wit keeping two Americans sane and on schedule in Sweden (and saving my life by helping me locate a public toilet as well as a Swedish copy of Ninja Mission). First class one way, stuck in Sweden the other... Yes, even nights of putting out good friends to help in scanning and creating the extras that would end up on the DVD (at least in part) were all amazing fun. So... now that six years have passed (I'm getting old, but I would still hop on a plane tomorrow for the chance to meet up with Bo Arne in a good setting)...I want to share all that stuff.
A lot appeared on the Synapse DVD that eventually came out. If nothing else, it remains a superb DVD in my mind... a fantastic film that benefited the public by that labels hard work. Thriller is now perfectly saved, and perhaps one day a licensing agreement could be struck to move it into the HD dimension... perhaps. But there was more... I had toyed with writing a book on the mysterious and intensely talented Vibenius. He is a fascinating guy and did amazing things using limited time and resources-digging deep into his mind to find what he believed to be the ultimate "commercial" film. So, lots more to share-I recently unearthed the original scans off an old hard drive. Some have appeared online with the dust marks I remember trying to remove-so now I get a second chance.
Make no mistake... this could be called "how to work in the DVD business and try to save a favorite film and not make a dime"... it could be called "tattles over tits and guns," but I'd prefer to call it what it is.
A tribute series of posts to share what I know, what I've seen and what I have on this film. Bo Arne...if you ever see this I hope you know that Thriller-A Cruel Picture is still a favorite film of mine, and you are one of my favorite directors. I hope that I can add to the legacy of this modest film from Sweden, made to help a young directors family after an earlier film didn't make the hoped for return... Sheer genius backed into a corner and coming out on top.

Lots of material will be coming your way...heck, I may even have my original subtitles for the Chrome release (which were slightly fixed up for the eventual DVD, I take a lot of pride watching those suckers play on the screen). If so, up they go...

First up, the pressbook for They Call Her One Eye! Click for nice big copies to peruse. There are a lot of interesting bits to take in. Until Synapse dug out the elements for an uncut English version, I had never considered Frigga to be suited to the character, but that has grown on me. The comparison of Jane Wyman to Christina Lindberg is pretty interesting also, though I don't think Christina ever thought an Academy Award was headed her way. I think she is pretty damn good in the film though. The beach photo is covered and I talked about it some more in my biography on the DVD for SEX AND FURY from Panik House. Nifty detail, and perhaps it sold some exhibitors on her charms.
The history of the film being based on a story by Alex Fridolinski makes me smile, since that is a pseudonym for Bo Arne Vibenius. Strange to want to cover the directing and writing, but being unable to resist a producer role, but it adds a little mystery to the film.
And who wouldn't want an original promo eyepatch??
Enjoy! 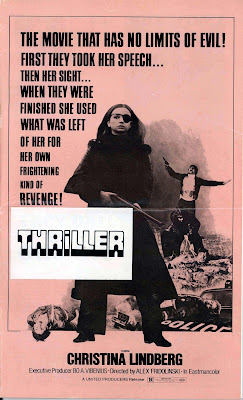 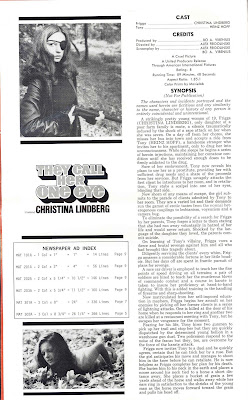 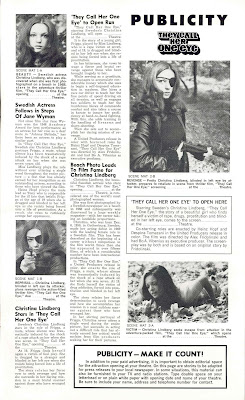 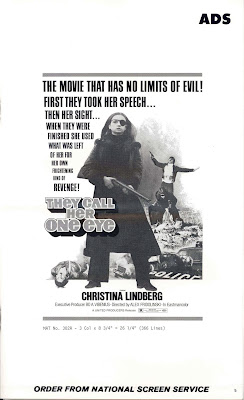 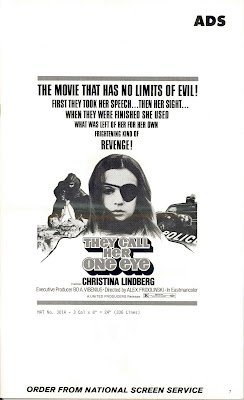 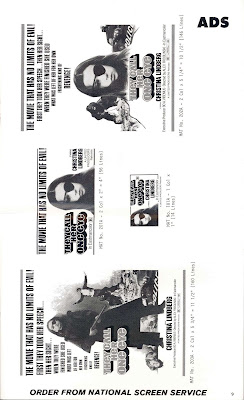 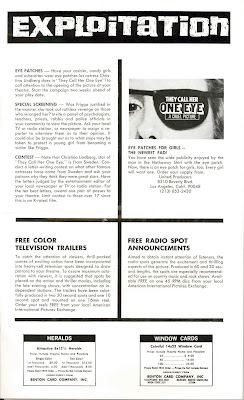 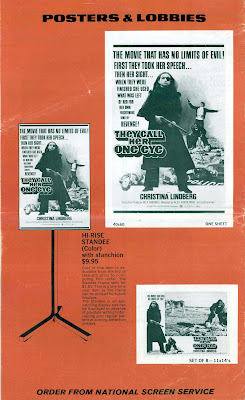 Wow! Thanks for this post. I literally just discovered this film yesterday and was getting ready to order it from Xploitation. Now, It's at the top of me list!

That is great, enjoy the film...be sure to get the uncut version here:

This is one of my favorite pressbooks. I LOVE the promo idea of theaters offering eye patches for girls - NEWEST FAD!