At last, my own list. A lot of things could go on here, but this is what I came up with after whittling away at a list of over 100 essentials. These are not in any particular number order, each is a number 1 in my book.
Since the entries have stopped rolling in, I'll start tallying up the data this week!

House By The Cemetery: A line in the film has a tired and weary researcher proclaim “I've lost all critical perspective...” With this film, I have as well. This is the best Fulci horror film, and manages to cram in bizarre mannequin abuse, knife in the head splatter and a gothic ambience that equals many of the 1960's Italian spookfests. A fantastic soundtrack and all that splatter is tied up in a nice bow of arteries and gristle as one of the great monsters of european trash horror finally appears in the mashed and monstrously alive Dr. Freudstein. While the finale cops from Jorge Grau's earlier Living Dead At The Manchester Morgue a bit, it is downbeat and uplifting at the same time. House By The Cemetery is the best film from the crew that forged Fulci's splatter legacy.

A Virgin Among The Living Dead: One of the strangest films in the odd oeuvre of Jess Franco. A film shrouded in mulitple versions-including a rampantly available mutilated edition that saw Eurocine splicing in “zombie” footage by Jean Rollin to dilute the films strange atmosphere by injecting “real” horror. With a haunting score propelling along the strange tale of a young woman's return to her family estate-there is a real mystery to solve, but in this villa it seems reality is as distorted as a tenth generation video dub of the XXX edition of this very film. The world bends as love from beyond the grave and sexual bliss at scissor point collide to jab the viewer at every turn. A perfect film from Jess Franco.

Vampyres: Jose Larraz’ stunning sex and death film works as a straight up splatter film with two incredibly sexy leads, but there is more to the film than that. I’ve always seen this as a haunted house film as much as a vampire film and find it endlessly entertaining. Besides, have YOU seen a better pair of lesbian vampires than Marianne Morris and Anulka? If so, let me know! Bonus points scored when the title was released to DVD and contained a great commentary track with Larraz. When he practically shouts the words “Anulka’s POOOOSY!” I can’t stop laughing. Good to know the filmmaker loves his subject.

Thriller: A Cruel Picture: One of the best exploitation films to come from Sweden, I’m obsessed by Bo-Arne Vibenius’ masterwork. Slow motion death, a performance from Christina Lindberg that is great on both the surface (and what a curvy, beautiful surface it is) and in creating a character without using any words. Rough and raw, this one has hardcore sex, hardcore violence and puts the lead character through so much hell that by the end of the movie you can only sympathize with the horrible vengeance she wreaks. A great final sequence completes the ultimate Swedish Spaghetti Western cum Sleazeploitation.

Web Of The Spider: Antonio Margheriti remakes his own classic gothic horror, Castle Of Blood…only in color and with Klaus Kinski as Edgar Allen Poe! Talk about perfect casting! The opening Poe sequence is worth the price of admission, and once our hero enters the haunted mansion the film becomes a mesmerizing ghost story with all the trimmings. Michele Mercier may not be Barbara Steele, but she does an admirable job in a complicated role. Antonio Margheriti did everything from space operas to violent action and right on back to gothic horror-and this under seen and never properly presented film is one of his best.

Female Vampire: The second Jess Franco film on the list (I’m limiting myself here), this features an early and career defining performance from Lina Romay that is nearly flawless. Her Countess Irina is both sad and predatory, and those that come within her reach (har har) are drawn to her for both reasons. Lina Romay at her finest and an unforgettable Alice Arno performance collide with the score by Daniel White and the images that get up in your face quite literally, this is Franco’s best sex horror film.

Tenebre: I think of this classic Dario Argento film, my favorite of all his work, as a true milestone in my personal trip through trashdom. The film is slick on the surface, shiny and bright… yet is loaded with despicable deeds and shady characters so well that it becomes uncomfortable to root for any of them. A writer wants to cheat on his wife-and more. A journalist has gone over the edge-with an axe. The cops are barely able to keep up with any of the action-so much so that a fiction writer can do better than them. And let us not forget that there is one character with a secret that involves a transvestite! Argento’s camera prowls and puts the viewer right into the mind of one psychopath, while leading us away from another. The music is pure electronic adrenalin and the story moves along quickly.

And yes my fellow gorehounds, THIS one contains some of Argento’s most harrowing set pieces and fountains (literally) of blood. A must.

Werewolf Shadow: Paul Naschy is a guy that has the balls to write himself the best roles in the world. Be he a wolfman, a hunchback or even just a bloke on holiday-he gets the girl(s) and always has fun. Fun is the way I look at his films and Werewolf Shadow is one fantastic mash-up monster movie. Let’s see what we have. Naschy returns as Waldemar Daninsky. He gets multiple beautiful women involved in his werewolf drama. He romances…. But the evil Countess Wandesa is on the scene. Paty Shepard is a great vampire woman to our hirsute heroes El Hombre Lobo and we get creepy tombs, hanging werewolves and yep…a throwdown that isn’t exactly long, but goes deep on satisfaction. Werewolf Shadow is the ultimate Eurotrash Saturday Afternoon Chiller Theatre for the big/little kid in all of us.

Return Of The Evil Dead: The Blind Dead are the coolest zombies ever. I’m not kidding, these guys are just plain menacing and original and feature one of the coolest designs in all of monsterdom. While I could simply put all four of Amando de Ossorio’s films on this list (or cheat and call them one), I will play by my own rules and take this one. The Templars are back and ready to rumble all over those that did them wrong. A bit lower on atmosphere, but higher on impact-this is action and trashy vibe all the way through. If you have not experienced this film, you should simply get them all. The music by Anton Garcia Abril is almost a special effect in these films, and never so much as in this particular entry. Ominous sounds backed up by perfect images… The Blind Dead films are classic Eurotrash monster movies-Return Of The Evil Dead is the monsters on the rampage.

Burial Ground: You may shake your head and wonder why Andrea Bianchi’s trashy zombie opus would be in a “pinnacle” list. But sit down in a theatre (or with a bunch of friends at home) and watch it. Unrelentingly sleazy, but in a fun way, we meet some goofballs that are in a big villa to hear from a professor about…something. Unfortunately for said professor, he is chowed down by some spooky looking zombies before he can tell them, or us really, what the hell is going on. But who cares? The characters are chased all over the place by some incredibly well made up zombies! They drop like flies amidst their own bickering…but they don’t just get caught by slow moving shufflers. These zombies use tools. They beat down doors, they hurl metal spikes like ninjas and just wait until they have to find a way to get a fools head off with a scythe! Perfect entertainment or silly spectacle? Both! You can’t take anything from Bianchi though, he handles it with his trademarked “wade in and wallow” style and it all comes to a screeching halt before it even gets to be 90 minutes old. Besides, you too will be scarred by Peter Bark and his mommy obsession! Bark is a “little boy” that wants to stay close to moms breast. Since those breasts belong to Mariangela Giordano I can’t blame him. But when he gets monstered up… he takes breast feeding to a new extreme. 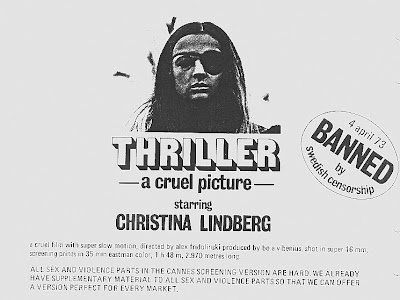 Does this mean the project is complete? I certainly hope not, as I've very much been enjoying this feature.

I'd hate to close it down myself, but it has been some time since any lists flowed in. Shoot one on over Neil, I'd be happy to put it up!

I'm gonna have to see me some Web Of The Spider.
How's about a Peplum Pinnacle in the near future for The Tomb ?. How Cool are those two Steve Reeves Hercules Flicks !?. Paul

Great list Z-Mania! Don't forget
the Buzzerstein's top 10, posted awhile back at the ETP when we were first discussing "The Pinnacle
Project".. : )