One of the most interesting parts of blogging too my experience has been the great feedback (and search hits) that it elicits. I recently reviewed a funky novel by Dan Brennan entitled Insurrection! and couldn't help but wonder about the author with each and every page turn. Was he pulling my nose? Was he just crazy? Very little information exists on the web, and thanks to a comment placed on this blog I got some answers! Here is hoping that this information will find it's way around the web for anyone interested in what sounds like a fascinating life in both a printed legacy and a story for late night pub talk in his home state (and beyond!) If you read the original post and check the comments, this helpful post from Bill Brooks should not go unread.

" The real story about Brennan is beyond belief, but true. Dan was a Minneapolis based writer with 40 novels, a British and US best seller in 1946 "One of Our Bombers Is Missing"; a highly decorated WWII tail gunner ace, (flew 80 missions with RAF and USAF); news reporter, highly published outdoor sports writer-- the bio goes on and on. He was a crazy Irish boozer, MN legend a wild genius who could've gone toe to toe against Hemingway, shooting the bull about hunting, women-- and his specialties guns and drinking. Long live Dan Brennan, 1917-2002-- Bill Brooks, Mpls."

Bill and I exchanged a few emails since this and with his permission I wanted to pass along a little more information. I hope it spreads the word on this particular writer, I know I'll be reading more of his work, and thanks to Bill's information, I will do so with a wink and a nod (and perhaps a few beers) up to Mr. Brennan! 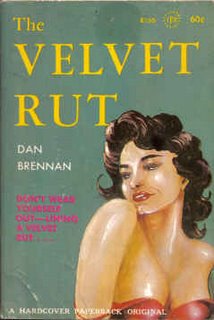 Not only was Brennan a writer for nearly 55 years, he was also a tailgunner and flew with the RAF and USAF! Now that is certainly enough for a book right there. He remained in Great Britain after the war and sold his novels there with several successful works, all the while being published in magazines such as Sports Afield, Field And Stream, Argosy and more. Upon returning home to Minneapolis he carved himself out some noteriety with his wide range of potboilers and war books, including the intriguing Velvet Rut (what a title!!)-that included many real figures from the local scene, barely disguised but obvious to those in the know. I figure he was in his early 50's while writing Insurrection! and that gives the book a good bit of perspective-and also explains the military aspects of it being so well put together and thought out.
In his later writing years he had articles published in the L.A. Times, notably calling the film Memphis Belle for it's inaccuracies, of which he would be quite aware.
A fascinating guy-and someone that truly lived a writing lifestyle! I'll close out with two things... the obituary posted below (click for a readable image by the way) is from the Minneapolis Star Tribune and comes courtesy of bill. Also it is great to know that Bill took the picture of Mr. Brennan in 1973 while on a sharptail grouse hunt, I want to thank him for anyone that reads this for sharing all this information. And finally, I think Bill's own words say it best...

"He had five kids with his beautiful blond wife Helen, who was originally from South Africa-- he met her when she was a WAC Battery commander in London during the Battle of Britain and he was on his way to becoming the rarest of air aces-- a tail gunner. How he survived some of those missions was huge unto itself.

Thanks for your interest, David-- he was a complex guy, charming, intelligent, hot tempered when drinking, fiercely loyal-- 100% Irish. The social class was uptight about him here in staid old Minneapolis. (And for Insurrection!-- I never knew him to be racist-- as for the book, he could read the social barometer as well as anybody and that was the era of the Black Panthers and all that-- and he was always looking for fresh topic material!! He loved yanking everybody's chain.)" 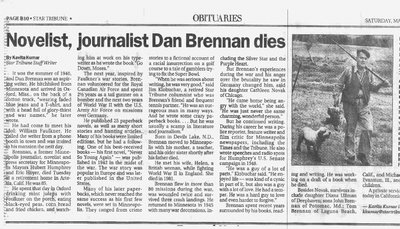 Thanks for the little piece on Dan Brennan. I found it while researching material for stories about my hunting life. I first met Dan in about 1974. He accompanied three of us young guys on a pheasant hunting trip to Brookings, SD. Dan did like his booze. Of course, so did one of our younger guys. They made quite a pair. Dan later wrote an article about that adventure. We were a little annoyed at how he described us young guys and our hunting techniques. But, since I write stories too, I can see what Dan was doing. The description, though not quite accurate, did make the story more interesting.

Wow, last I heard of Dan Brennan was when he was politely asked to leave the state of Minnesota by a judge in 1979 or 1980. (He had been bounced from a cocktail party and retaliated by throwing a sled through the hostess' picture window.)

Thanks for posting the info. Currently reading a book of his I picked up used. It is very good--WW2 related--and I could not find any other info about the author. He actually writes really well. Kinda like Graham Greene, but much faster paced (a good thing) I would be nice to find some other book reviews of his work, but Mr. Brennan seems sadly not well represented on the net.

I am the eldest of his 5 children. He was a compelling and repelling individual. Bright, creative, multi-talented, warm, fun, & loving when sober; a beast when drunk. Not sure he was ever asked to leave the state.....

Dan's writing of books newspapers and short stories are a true testament to his talent. 48 Novels were his passion. Writer fighter drinker father and coach. Something we all remember him by.