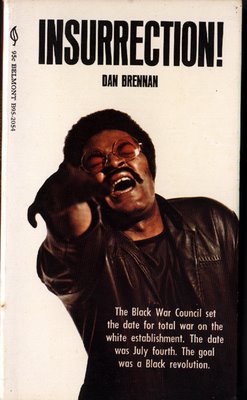 Another Friday? Already?? Sorry for the lack of updates, I am hard at work on finishing all of the appendix work for Tough To Kill (and more on that shortly) and was ready to send you all over the web with links and such, but I want to instead turn to one of the strangest (and luckiest) book store finds I've come across.
Insurrection! blasts off the shelf with that title and a very angry looking black man in leather pointing at ME (WHITEY!!!) and tells me that "The Black War Council set the date for total war on the white establishment. The date was July fourth. The goal was a Black revolution."
Well sign me up! The 1970 copyright date and Belmont Publishing seal were too exciting to pass up as well. So could the book possibly live up to the promises made? Total war! A Surprise For Whitey (it says so on the inside cover)!
Yes and no, depending on which parts of this scattershot little book you are reading I guess. Part Kill Whitey mantra, part Black Mama, White Brotha...and lots of gore and body part slinging and blood drenched sequences told in a maniacal jumble all form this slim volume.
Opening on the promised Black War Council's decision to attack a country club on the Fourth of July holiday to strike down THE ENTIRE WHITE POWER STRUCTURE of a major city (because they ALL love tennis don't they?)-and they have the leadership of Rip Stone to carry off the plot. But it won't be easy, because for every bit of black racist hysteria on show, Brennan balances it with paranoid white racist hysteria as well! Col. Malcolm Davidson, retired artillery specialist, is doddering around the Woodhill Country Club when he notices a young black man (not what he calls him of course) wandering around the greens and fairways...COUNTING OFF MORTAR RANGE! Davidson tries to warn everyone, but who would believe it? Nobody of course, but of course he is exactly on the money. That young man is the poet brother to black tennis sensation "Smoke" Johnson-a conflicted dude that is coming home to play at the club and perhaps rekindle his inter-racial romance with Cathy Hessguard-a richy white girl whose family holds some stroke at the club as well. The Hessguard family has cheating spouses (yep, more inter-racial antics of course) and are a bunch of clueless folks in general. The characters just kind of meander around from these starting points however, because Brennan enjoys having them say some really silly slurs and pouring on the romance novel tedium for the most part. This is the quieter sections of the book however, with perhaps the exception of Smoke's tennis match that he sets out to put the white player in the hospital from exhaustion and succeeds no less. It appears that the author realized this was all well and good (and probably a lot more forbidden in it's day)-but readers want action.
In a strange and completely bizarre twist, there is a lot of time dedicated (and spread AROUND the main story) to a clash between the Black fighters and a white group of militia men. I'm not kidding, it goes on and on endlessly, but this is where Brennan excels as he ladels on the gore and race hatred that not only covers white fighters and black soldiers....but INDIANS as well! Sweet Christmas Luke Cage...Tonto is in the game! By the end of this spread out fracas nothing is really accomplished or resolved, it just is there to build up the word count so that the final assault can be unleashed. Well, it could have been worse...if I had to listen to lines about how the white man wanted to push his entire body into the beautiful black woman even one more time I may have been overwhelmed.
So at this point we have about 50 pages to go and I'm thinking that Belmont really knew how to package a book to steal my attention, but then IT happens. TOTAL berserker rage is unleashed as nearly EVERY character is not only killed, but decimated along the way. Limbs fly, women catch fire, old white men battle young black militants while wearing the brains of their children, faces hang from posts...it really is quite a spectacle and a payoff that makes every previous word worthy of wading through. Brennan even manages to take his white and black construction paper characters and inject them with a little heart as the retired Col. tries to rally the besieged and befuddled white crowd after many of them are mortared into toothpaste in a pages long conflagration.
I'll post a final spoiler, the best twist if you will, after my thoughts just in case you want to hunt this down and want a good ending that will either make you smile or grimace in agony...

So, it isn't great, but once it gets rolling it is a juggernaut of violence and action splashed in simple black and white (and red all over). Dan Brennan's prose isn't anything really special here, it seems as if he was cutting and pasting to keep the book at a specific length-choosing to focus on the taboo aspects of his tale over the more practical bits. At one point a black militant mentions that they found an infiltrator (and this is right near the end), but we don't know anything about it-instead we know all about Mrs. Hessguard's being blackmailed for having sex with her tennis pro (although that does have a great payoff as the blackmailer crawls to pick up his money only to have his legs blown off by a mortar round!). Also, I really enjoy books of this period such as the work of Joseph Nazel (see my Iceman posts here and here) and recently started reading Donald Goines work as well. They have a "you are there" streetwise patter, swagger and strut that Brennan has no feel for at all. He tries to write in a KILL WHITEY tone and it sounds very fake...he has the whites put down all blacks...same thing. The fighting and action scenes work better and feel more graphic then endless uses of common race baiting to get a response. Though on some occasions, especially when the Col. finds his son in bad with a black woman, he does manage a huge barrage of vitriol that I found rather inspired.
Insurrection! seems to be quite hard to find (or expensive if you do)...and while there is not a lot of information on Dan Brennan that I could locate it appears this novel is referred to as Science Fiction. It isn't, though it may be outrageous at points and end on a rather dystopian note, it is certainly not worthy of that genre tag. Brennan was a pulp writer by trade, and this is another pulp novel-with a few little twists and a demented finale. By all means, if you like graphic action mixed with a tale that would most likely get you killed in telling today...grab this one up.

Still here....I'm going to put the final lines of the book next.... watch out!


OK...so the final chapter unspools after the mass slaughter at the country club is finished. The President of the US is told he must give Blacks 3 states, 3 billion dollars and it must be made known that all Blacks will be independent of US Law. In a bizarre twist of So what does he do?

"...and the President sits not moving, waiting for the telephone to ring. Which he will not answer, thinking that he will alert the nation, war is declared, the blacks are doomed, the militants must be brought to surface, baited, fished up, and the hit cities will do.
Orders for tomorrow.
Signs at all hit cities.
FOR WHITES ONLY.
The President rubs his hands. The bastards, the dumb stupid bastards, they won't wait or listen; that sign will surface the militants. They can't keep underground with those signs out.
They will have to show themselves.
And guns will be their hosts."

Nope, didn't see that coming at all. Well, it sure is an ending...not well composed, not something that was expected...just...wow, now that is an ending that really plays off of the premise in a crazy way. Insurrection! It ain't your average pulp book at all really.
Posted by David A. Zuzelo at Friday, July 28, 2006

The real story about Brennan is beyond belief, but true. Dan was a Minneapolis based writer with 40 novels, a British and US best seller in 1946 "One of Our Bombers Is Missing"; a highly decorated WWII tail gunner ace, (flew 80 missions with RAF and USAF); news reporter, highly published outdoor sports writer-- the bio goes on and on. He was a crazy Irish boozer, MN legend a wild genius who could've gone toe to toe against Hemingway, shooting the bull about hunting, women-- and his specialties guns and drinking. Long live Dan Brennan, 1917-2002-- Bill Brooks, Mpls.