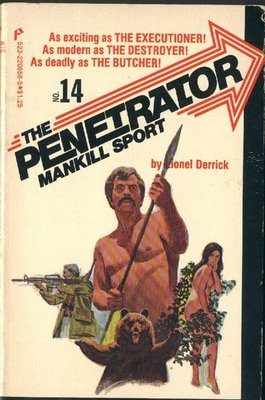 THE PENETRATOR #14 - MANKILL SPORT...Another Dangerous Game tale.
"Mark pumped one M-16 round into the guard's head. He fell with a new right ear canal, the small slug shattering as soon as it hit the skull, slicing his brains into a dozen unrelated, non-functioning fragments."
Ouch!
I'm a fan of this series of men's action books from Pinnacle Books-the Mark Hardin character is a nice cross between big bad Bolan with a little indian mystic tossed in for fun. The writers working under the Lionel Derrick name usually put together solid gory fun in the compact little entries, and Mankill Sport is another success. Far from the best of the Penetrator series, it still tears along as Hardin goes after the head of Detroit's Narcotics trade, Johnny Utah. Packing up his calling cards of arrowheads he heads into the woods of Canada chasing around the bad guy all around and getting trapped in the drug dealers little side business of human slaughter. Utah runs a retreat for hunters who are looking for that Most Dangerous Game of human hunting. Various bad hunter guys appear and slaughter a few captives until The Penetrator baits his way out of the holding cages by hurling his feces at Utah in a wonderfully scataction segment! The longest part of the book then focuses on Hardin stripped down and battling various hunters and finding many many ways to kill people as hoped and expected. A nice little side story that isn't really developed at all until the finale brings a sexy woman into the fray-and after gang rapes and other unpleasantness unfold she gets a whole lot of payback.
It gets ballistic and the brief 180 page runtime expires in a way that left me smiling. Mission Accomplished and Pleasently Penetrated. Rated on a scale of Penetration, this one goes 2.5 Exploding Hut deep.
Posted by David A. Zuzelo at Monday, July 24, 2006