Sorry for the delay, a combination of summer fun and spreading myself thin have slowed down the bloggy joy for a bit. What began as a small appendix section in my current book project became a ten thousand word feature and things have been hectic trying to beat that into shape. Many of the blogs intended reviews will be heading outward bound for GaspEtc... online as well as the second issue of Dark Discs taking on my CineXtremist Column that has me scouring the globe for a whirlwind trip of digital sleaze. 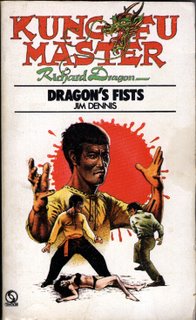 So today I finished off something I've wanted to read for years, the "Jim Dennis" novel which spawned the Richard Dragon character at DC. The author is actually comics guru Denny O'Neil and James R. Berry working together, and this story was somewhat adapted into the original run of Dragon comics during the 70's fist and foot four color boom. I've always loved Dragon, even when DC has messed him up-setting matters partially right with the more recent series. But the book is actually the best version of the character out there, given more running room our man in the gi comes across as a reformed punk gone kung fu mystic as he follows the O-Sensei path to enlightenment.
Thankfully, that doesn't stop him from whipping some serious ass along the way.
We first encounter Richard Dragon (after a prologue sets up our plot with some magical numbers being passed to the O-Sensei's daughter and her being sent to Dragon for protection) as a philosphizing kung fu sensei on his own. While protecting Carolyn Woosan everything gets messy of course, as the brutal merc, THE SWISS, sends his men to kidnap her. Dragon's dojo is shamed, and he isn't going to stand for that. Forced to work with GOOD (the O-Sensei's group which favors humanity over humankind) and pairing off with his friend Benjamin, Dragon battles savate, wrestling and other straight blast fighters until it all comes to a furious climax that involves a fire engine chase sequence and a very cinematic rain blasted highway battlefield.
More interesting than the action plot is the way the authors weave in Dragon's history-in a short span of flashbacks he becomes fully realized in a way that many Neo-Pulp authors do not achieve. Perhaps O'Neil's skill in comics plays a role, but in this slim volume they walked away with not only a good story, but a fully fleshed out character that ends in a different place than he began, even if it required all kinds of loss and violence along the way. Worth seeking out, and one of the most entertaining kung fu books I've ever read! Not exactly an all out sleazefest (as some other series can be to my delight), The Swiss is a grand foil for Dragon... a sadist with some fighting skills-they make a good pair.
Overall, a fun read-even buried beneath a truly sad cover on this british edition from Tandem books. Worth seeking out, and any fan of Richard Dragon should do so!
Thanks to Paul for shipping this sucker over-another book off my dream read list...only a zillion more to go!
Posted by David A. Zuzelo at Wednesday, August 09, 2006