DvDeeerect... A RoundUp of Cheap Fun!

For the first time in over a year I had a weekend with unlimited access to the big screen and swore to make the best of it... So many discs to view, so little time. After the Fanex experience and a trip to Hollywood Video with Bruce H I realized I was WAY behind on my current Direct2DVD productions-and it was time to make it right. I didn't just watch these, but did cram five new ones in too my brain cavity, and it was damn fun. In a lot of ways these films are a pointer as to what the Something Weird line will look like in 20 years. Sometimes mind numbing, other times utterly berserk... trash films aren't dormant, they are just a trip to the video shop away. With current sales like 5 discs for $20 dollars on, how can you go wrong? So here are a few fun discoveries...

Red Riding Hood: This is a cool flick that pretty much counts as Eurohorror in my mind. Produced by Maestro Ovidio Assonitis and loaded with gory bits that are fairly surprising, we get a film that features one little girls loss of touch with reality (and a Don Quixote complex if you will)-as she conjures a very big, and very bad, wolf to slaughter those she finds unworthy of living. While it suffers from a bit of crappy overacting, the film makes up for it by being very very cleverly constructed and daring to have a ...gasp... unique take on the surreal serial murderer movie format. A great score that is a bit headscratching in spots, but enjoyably so, pushes along the action in another nifty touch. The effects are just flat out gross, the monster is actually quite spooky (even riding a bike!) and the Rome locations are beautiful. Interestingly, Sergio Salvati-Lucio Fulci's eye popping cohort-was a cinematographer on this one, and I bet he did the gore shots. They linger just like the Fulci films, and if the great man was still around, I bet this is a film he would have relished making. Also, I noticed the location from Suspiria where that huge tracking shot swooping down was filmed...and there is a blind beggar in this film as well! Accident? I bet not.
4 Directly Spinning Discs of Death

Ice Queen: I love me a monster movie, and this one is a blast! It may take a while to get to the good stuff, but I'll give the filmmakers a big hand for keeping me interested by putting some truly Pneumatic Nipples on show before then ( go here to look at some screens if you please)-and then bringing on the evil bitchy ice monstrette. Good effects, a great monster make-up and a cat fight along the road to gore-dom. Plus: Miniatures!!! I love movies with mini-mayhem, and there is a nifty ice slide sequence that puts them too good effect. Worth watching for that alone.... oh, and the utterly stupid ending helps as well. I use the word stupid with affection here, it is one wacky bit of writing too resolve this all up. And hey, I've actually gone skiing at this films location in Vermont!
3 Directly Spinning Discs of Death

The Beast Of Bray Road: I used to watch the Asylum pics all the time ( David Micheal Latt's KILLERS films are brilliant)-and this one just floored me. I love werewolf movies, and damned if this isn't a good one. It sputters a bit in the non monster sequences, but not badly enough to bore...but once that beast comes out I was jumping out of my chair. It isn't every movie that features a cool werebeast rending a head in half and mangling everyone in it's path-and The Beast Of Bray Road goes at this with gusto. Highest Recommendation on this one... thanks to Bruce for passing it along. I enjoyed the behind the scenes sequence as well, a clever finale that I didn't see coming was a last second swap, and I'm really impressed by the film more knowing that little detail. Gorehounds will dig it, and werewolf fans have a new way to spend 85 minutes watching the hairy monster terrorize a town. Great!! 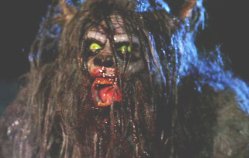 Return Of The Living Dead: Necropolis: Well crap, I had heard nothing good and have to agree. What a turd this is! First though, I have to give a huge round of applause to the folks at Optic Nerve for making some great zombies and even some robo-zombies. They look AWESOME and kept me viewing. As for the rest of this film, if you can find a less interesting zombie film, please let me know and I'll avoid it! High school kids go commando and battle a bored to death Peter Coyote...acting sucks. Pacing sucks. Action sucks. Gore good, but sadly, can not even save this from itself. The ultimate sin of random soundtrack needle dropping occurs as well. Ugh. Worst of all, you get these nifty robot zombie soldiers all laid out and built and they do NOTHING. NOTHING!!!!! Garbage. I'm not even gonna upload a pic for this.

When A Killer Calls: I love the old "phone calls of doom to the babysitter" idea, and this flick sure does go all out with the concept. I love that it is marked on the box as "Based on the horror legend that inspired Halloween, Scream & Black Christmas" yet doesn't mention the title it cribs and changes one word of! Good show Asylum...you got me! This is one rough little film, the opening 5 minutes gave me a heavy case of the booboojeebies actually-there is some heavy duty New York Ripper level violence to start us off and on top of the typical terrorizing there are some pretty shocking pushes of the envelope going on. Kids ain't safe in this one, and if you haven't checked the children they are most assuredly dead in this film. Overall, a good intense little thriller with some over the top killer antics and decent suspense.
2 Directly Spinning Discs of Death

I did learn something from When A Killer Calls, and it is worth pointing out. You never appreciate a good (or at least decent) subplot until one goes missing. This film could have used something to relieve the long stretches of tied up babysitter listening to noises from upstairs scenes that make up the final third of the film. Not something I ever believed, but this one sold me on the upside of changing locations every so often.

Overall, a great weekend of DTV stuff (not too mention some great kung fu, drive-in, Tokusatsu and more)...I have STACKS too go and plenty of popcorn-I'm heading back to The Asylum soon methinks.
Posted by David A. Zuzelo at Monday, August 28, 2006