Back in this post I had wondered about the upcoming release of the Eurocine film CECILIA. That title is a splice job using footage from Jess Franco's film Aberraciones Sexuales de una mujer casada and new footage shot by Claude Plaut (which is a pseudonym for Olivier Mathot, that name itself a pseudonym for Claude Plaud!). It does appear this is the cut and paste job, which I'm actually very excited for. What I found interesting was the first review I've located on the title over at the wonderful 10,000 Bullets site. Check it out... the film runs about 10 to 15 minutes to long and features scenes that are vintage Franco. Sounds like the standard cut and paste job from Eurocine. However, maybe I'm just warped, but I love to see these paste up variants, because not only does it get some of Eurocine's charm popped on top, but the Franco footage is highlighted as being BETTER than the rest of the footage.

To add to the Eurocine Art Archive, here are the two faces of Cecilia! 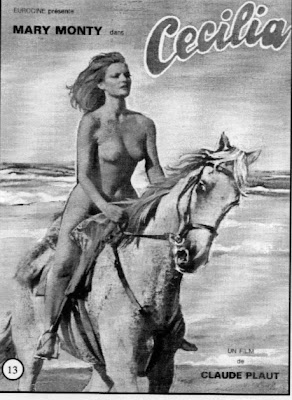 Wow, that second one is fantastic!

Glad you like 'em, I re-upped the second one in color!

Why don't they use stuff like this on the DVD cover?

The second poster could well have been promoting a Tinto Brass picture!

Good question, I love that original artwork for the Franco film myself. Of course, this isn't really that film, but I'd happily take that top art as well.

I'll go one better, they should release Franco's film ABBERACIIONES... in Spanish. That's the film he made, edited and supervised post production. CECILIA, as you and I know David, is the Eurocine version and this extended version must be another composite. It's NOT a Jess Franco film in that sense, it's a Eurocine remix. Give me the original film and artwork. Now, Eurocine composites remixes also interest me. But I don't know about paying 30 bucks for one. I probably will, though. Franco's Spanish cut lasts 90m, so Eurocine has added 15 m to that! Your review explains this and presents the correct artwork, something the other review doesn't. I wish internet reviewers would follow your example and do their homework. Thanks David.

Wow, great stuff! I haven't been by here for awhile. Hope your New Year was a good one :) Check out this cool horror clip comp. I saw on the Tube:
www.youtube.com/watch?v=RhcU94McuD4

I wish they could release both in one set Robert, but I'm sure the Eurocine deal is just what they have here. This is another case of people reading a package and just accepting the "Jess Franco" moniker. Regardless though, I'm very happy to see this released. You nailed it on price however...that is a lot of cash for what will certainly be a compromised version of a "Jess Franco" film.
I have a boot of Cecilia, and I remember that the footage quality jumped quite a lot during some scenes, I wonder if we'll be able to see a change from Franco to "Plaut" outside of style.
Honestly though, I'm happy to get this-I already dumped 20 dollars on a low quality DVDr and enjoyed it enough to buy again.

I also think that we won't see all 90 minutes of the Franco film-more bits and pieces with footage scattered throughout. In my Eurospy travels I popped in HOUSE OF LOST DOLLS which seems to contain about 40 minutes of Agent Sigma 3:Mission Goldwather-some oddball sleazy Pierre Chevalier stuff and what I think might just be one scene from a Franco flick. Fascinating really, but I'm happy to hear that a friend is sending me the real Goldwather to compare it with.

Is there a copy of Abberaciiones anywhere? I can't say I've found one yet.

You will have to go grey market for it. Maybe ask ETC. I'm still trying to figure what's what in HOUSE... Is the Chevalier stuff from an actual film? The scenes with Yul Sanders and Mathot in the club with Sandra Julien seem to part of a film, but the opening with the guy and chick escaping from the brothel seems yet another film. And the scene in the ship's hold seems like yet another film!!!! The 30 bucks is gonna kill me!