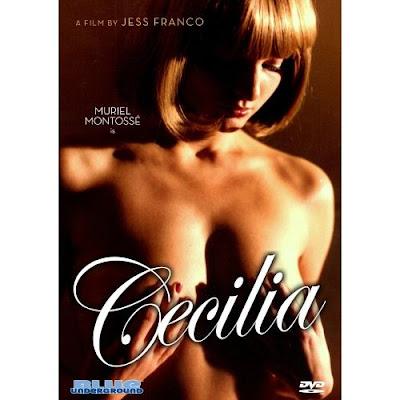 Now THIS is exciting. Two more Jess Franco films are coming to DVD thanks to Blue Underground. First up is an assured upgrade of the great Eugenie De Sade. This is perhaps my favorite Franco/Miranda film and also nice to see is that our man Belinsky will be on the DVD cover. You can see roughs for that art at this post as well.
I'm looking forward to watching this film for what certainly is over the 10th time, and will dig in for a review as soon as possible. If I can point to any one Franco film you need to see, this one could very well be it.
It stuns me every time.

What is more interesting is a nice presentation of CECILIA. Now this Eurocine flick is one I've viewed on Nth Gen bootleg in the past and found quite good. However, I've long believed this is not a Jess Franco film-at least not completely. It stars Muriel Montosse (who was also good in Franco's Sale jeu A Casablanca-which is out on DVD) and Antonio Mayans-another man synonymous with Franco's work. Sounds good. And it is. BUT, it still didn't feel like a Jess Franco flick.
With the exception of one rather long part, a crazy wild part at that. The copy I viewed seemed to drop substantially in this sequence and that sequence felt utterly like a Franco film. And indeed that sequence was all Jess, from a version produced a year earlier by J.E. Films.
But it gets BETTER!!
I must have seen the second version of the film, which incorporates scenes from the Franco film Aberraciones Sexuales de una mujer casada into another picture directed by "Claude Plaut." Plaut is an alias for Olivier Mathot, which is really cool since I love that guy and always enjoy seeing him. Even niftier is when I found that Mathot's real name is Claude Plaud. Plaut sounds a little more interesting I guess.
So, are we getting the 1981 Franco film here? I sure hope so, but I'd love to see a nice copy of the Mathot film as well. So, no matter what this is, it is a win win situation for me. The extras listed by Blue Underground include an interview titled Sexual Aberrations of Cecilia-so I'm looking forward to this disc with the utmost excitement. Truly rare no matter what is on the disc, this is the kind of film I love to see released.

It is Thanksgivings like this that make my inner trash film fan happier to be here. 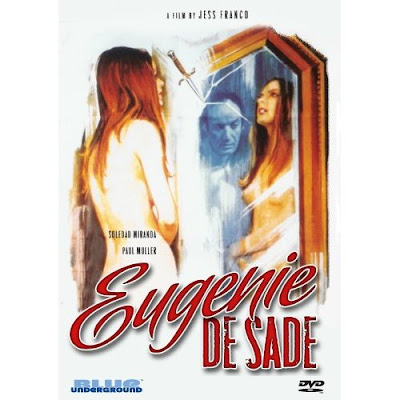 Love "Eugenie" but I've never even heard of "Cecilia". I'll definitely have to check it out.

I'm really excited as well. It being the original film I saw chopped up is even cooler. I'm usually a bit slow on buying the 30 dollar retail price titles, but both are must haves.

I can't really tell the difference between the new and older releases of EUGENIE. Is the new one widescreen? The "Wild East" and UK versions already were uncut.
Does anyone have more info?

The Wild East disc was OK at best-so this will certainly be an upgrade. However, that version contained the Alain Petit essay on unfinished Franco films as well as some clips. Good stuff to watch. I know the UK edition is reportedly better quality visually-but I feel confident the BU edition will top that one given the companies track record.
No listing for Widescreen, but it is listed as a new transfer from the negative.
PLUS, it will have another Franco interview-most likely produced by David Gregory. Those are always fun to watch.

CECILIA is not the original version of this project. Franco's original version is ABBERACIONES... the Spanish titled version in Spanish language. CECILIA is the later, first French dubbed, then English dubbed, remix. Of course, the dubbing changes the tone and sometimes meaning of the film. CLAUDE PLAUT (Mathot) probably indicates the dubbing director of CECILIA. My friend Francesco Cesari informs me that CECILIA is pretty close to the original, except for the title sequence and language. It would be good if they offered the orginal Spanish soundtrack supervised by Franco.

That is what I originally figured, but reading the BU solicitation it sure sounds like they are pitching the original one. Either way I'm quite happy-I'd only seen the "Plaut" edition in the past.
Time to email BU methinks! The way they titled the interview also seems odd if this is not the complete Franco flick as well.

Let me do some checking-though my unconnected self may ask for some help.

OBSESSION: THE FILMS OF JF credits CECILIA to our friend Pierre Chevalier! I'm not sure if he was actually involved, though. The French and Spanish are pretty much the same I'm told with the exception of the credits and language track. I'm hoping they release the Spanish one. I already have a good looking video dub of the French. It's a nice looking film, but I always prefer Spanish language versions, over English, of Franco's films. That's if Sp was the language they were originally lensed in.

I have these on the way...can't wait!