The Eurocine Art Project expands yet again. First it was just about Constantin Belinsky, then... good old Eurocine poster art that sucked me in. Now, want lists! If only this concept of feeding my family did not apply, I'd love to do up nice special edition DVDs of several titles that aren't available right now-and many of them are available through Eurocine! This first entry is a film I have yet to see, but looks very interesting. Apparently it is a flick with prostitutes and missing microfilm. Hey, with Pierre Chevalier at the helm and stars like Evelyne Scott, Alice Arno and Pamela Stanford it is a must see. And I've never seen it offered anyplace! So, number one with a bullet from my Eurocine Want List is PIGALLE, Carrefour des Illusions! DVD companies take note. I will buy ONE (1) copy! That is a sale for ya!
Pigalle, Carrefour des Illusions / La Ragazza di Pigalle / Pigalle, Crossways Of Illusion
1971 Celia Films/Eurocine
Directed by Pierre Chevalier
Music by Daniel White
Starring Evelyne Scott, Jean Michel-Dhermay, Beatrice Costantini , Alice Arno, Daniel White, Chantal Broquet and Pamela Stanford 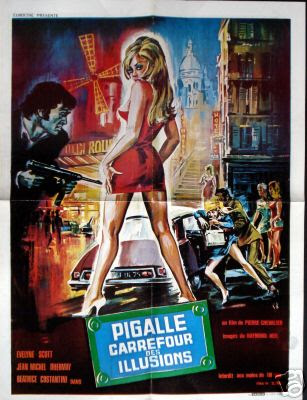 A gang use a stip-tease artist on tour in Lebanon in order to smuggle a microfilm out of the country. As soon as the girl lands at Orly field, she is followed by the smugglers who want to get hold of the film. Counterspies make an unsuccessful attempt to trap the smugglers who stage a spectacular kidnapping right in the middle of Paris in order to get the girl, but she has not the film. During the performance of an erotic show in private, an agent makes contact with a friend of the girl. But when the poor girl goes home, she is beaten to death in her bathtub by a hood. Before dying, she is nevertheless able to tell where the secret agent's gang is hiding out; it is an abandoned mansion... 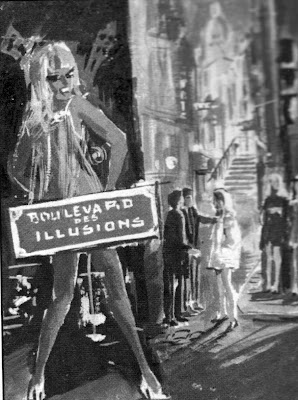 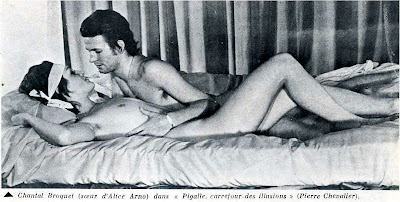 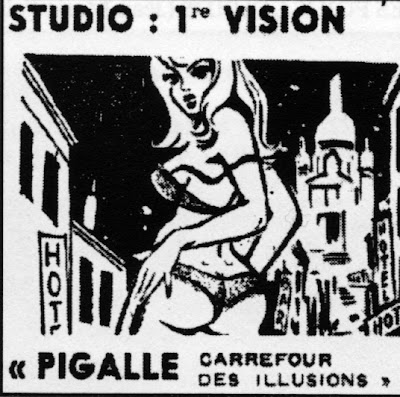 I think there's a reference to this in IMMORAL TALES, that intrigued me. Great pics, Dave--and I hope we get that disc some day!

Scenes from this may or may not be in Chevalier's Eurocine composite THE HOUSE OF THE LOST DOLLS (credited to Peter Knight). Great, sleazy artwork! Thanks.

I'll take a look at HOLD, I do know that this film has stock stuff from Paris Inconnu (another Eurocine film I have not seen). I guess that features lots of stripping and several of those are recycled here.

I wonder if the rights to many of these Eurocine films are actually available. They list Shining Sex-and I sure would love that.

Actually, the cover for PIGALLE is a lot better than the film itself... It's a pretty standard sleaze flick from Eurociné which is damaged by the use of a lot mof boring PG nightclub footage from what I think mayb be Eurocinés 1950/60s output. Still worth seeing for the lamest shoot-outin film history and the fact that you just want - nay, need!- to see them all.

Is there footage from this in HOLD or CRIMSON?