I was recently inspired by a post by Robert Monell on The Invisible Dead at I'm In A Jess Franco State Of Mind. Back in 2001 I attempted to launch a Eurocine fan site on the web. Response was underwhelming, though I did get a good amount of mail regarding my positive review of Zombie Lake. Go figure.
Eurocine is a pet fascination of mine, and though my zoo is full of strange obsessive filmstuff, the land of Lesoeur is something that pulls me back in every so often. This company produced or co-produced some of my favorite Jess Franco films, including Eugenie, Virgin Among The Living Dead, Awful Dr. Orlof, Exorcism / Sadist of Notre Dame amongst others. Not only did they help Franco get these films made, but if you look at the overall career of that wild director you can't help but see the gravity between these two entities. Be it 1962 and The Awful Dr. Orlof or 1989 and Esmeralda Bay-there have been ups and downs, but they are certainly linked, one as important as the other.
But there is much more to Eurocine. The Lesoeur's produced jungle action, sleazy trash, nazisploitation, sex comedies and porno on top. Sometimes all of the above at once. My world would be less fun without Maniac Killer or Othello The Black Commando to rewatch. Never mind Zombie Lake!
However, this is not a post about Eurocine believe it or not. One of the things I enjoy the most is the poster art the company created. From the threadbare to the elaborate, Eurocine always delivered a poster that sold the concept of the film to perfection. After spending hours perusing the Christophe Bier edited Cinema Culte Europeen magazine on Eurocine (a fine document by the way) I came to the conclusion that my favorite Eurocine artist was C. Belinsky. Two problems though. First, I can't find much, if any real, information on him. And on top of that I do not own a single piece of this fine fine art. I have lots of Jess Franco stuff, but no Belinsky! Hopefully this archive of images will change that and I can triumph and post a pic of myself with one. Belinsky's art is unique and I find it amazing to behold. At times the images feel like my memories of the movies-razor sharp in parts and hazy in others.
As an aside to the upcoming Lamberto Bava project, I will post up some Belinsky and hopefully start a new cult of fans. Maybe it is time to dust off SADOMANIACS INC. as the title of that old Eurocine site and see if Daniel Lesoeur would take my call. I wonder if he would be amused by the fact that I'd love to post a complete set of credits, artwork and reviews of these films in English? I think it would be incredible as a resource for fans of European Cult Cinema.

Two rough proposals for Eugenie. I actually find these amongst the most amazing bits of Belinsky items I've seen. Layout work is something I really enjoy looking at, and both of these are brilliant. 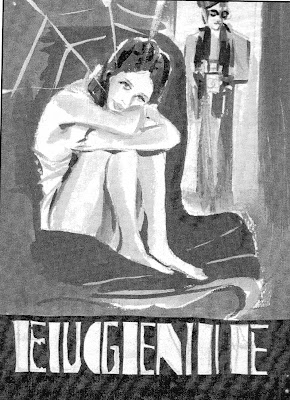 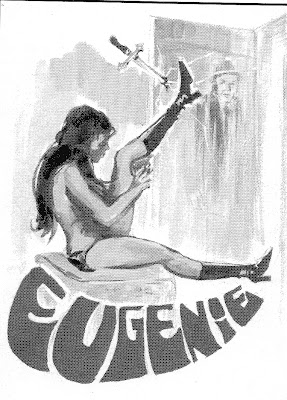 And here is the finished poster...incredible not only for the amazing image of the knife in the mirror, but also the likeness to the actors. 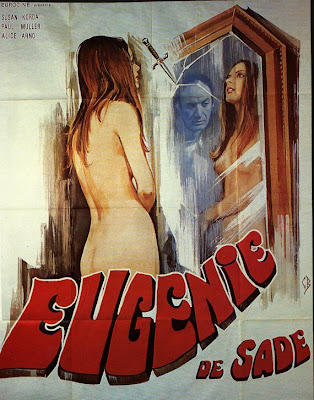 Holy Diamonds Of Kilamanjaro. Bienert looks happy and look at that monkey! I love the Eurocine monkey! I believe the same monkey appears in many of the 80's films-even laid up in a hospital bed in Commando Mengele. 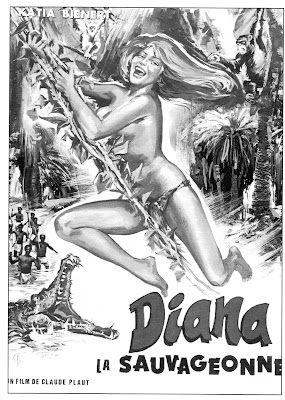 Never seen the film, but the cast and all those French words sound cool. 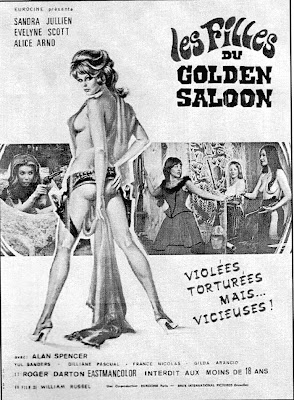 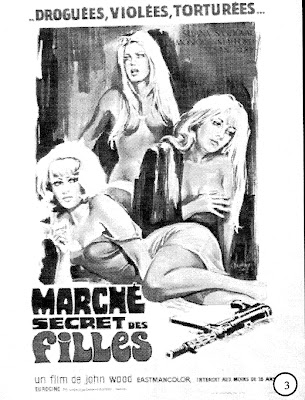 This one is for the Pierre Chevalier directed VIOL. A sleeeeeeeeeeZEEEE film with a young Brigitte Lahie no less. Now that is a great graphic. 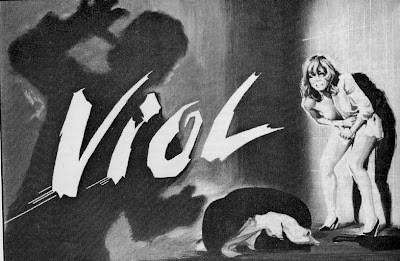 Those are fantastic. I especially like the 3rd one.

Thanks for putting up this unique artwork. I hadn't been aware of him before and know nothing about him. The EUGENIE poster is one of my all time favortie movie graphics. Daniel is a real gentlemen who helped set up an interview with Jean Rollin for me in the early 1990s. I really want to see GIRLS OF THE GOLDEN SALOON with JF as a customer. You have to see THE HOUSE OF THE LOST DOLLS!