From Doug Waltz we have a new entry with loads of great titles to peruse. He is also the author of a chapbook you have to read to believe! Just wait til you see the cover!!

From the man himself:

Douglas Waltz has recently taken a movie that never evolved into anything past a really cool poster and made it into a bizarre chapbook. BRUCE LEE VS. ILSA, SHE WOLF OF THE S.S IN THE DEVIL'S TRIANGLE is available now with the coolest wraparound, widescreen cover ever made by artists Linc Polderman. Ten buck takes care of it all and send it off to Douglas Waltz, 1915 Douglas Ave. Kalamazoo MI 49007.

A VIRGIN AMONG THE LIVING DEAD - I love this movie. It's
beautifully shot, minimal effects. A cohesive, yet trippy storyline
from Franco and a case where the zoom shot takes on a wild life of
it's own.

ZOMBIE - I saw this at The Douglas Drive In when it first came
out. There is nothing like the memory of this splat fest playing
against the stars and making you freaked out enough to roll up your
windows in July in .

SUSPIRIA - This was playing with ZOMBIE. It's amazing to me that I
wasn't driven mad during this double feature. My sister still hasn't
forgiven me for dragging her along for this one. I think she was 12
at the time.

BLOODY PIT OF HORROR - This one typifies the basic Eurotrash
sensibility for me. We get an insane muscleman in his Crimson
executioner garb. whacking pretty people in the wildest ways. I
prefer to watch this really bad print I have of this flick. Adds to
the sleaze factor for me.

MAKE THEM DIE SLOWLY - It was the mom and pop video boom. The box
for this thing dared you to watch it. I mean it had been banned in so
many countries. It had to be gruesome. It was and I've never needed
to see it again. That sucker is burned into my frontal lobes.

TOMBS OF THE BLIND DEAD - The undead Templar Knights left such an
impression on me that I started researching the real thing. Now I'm a
true Templar junkie and read waaay too many history books.

HORROR RISES FROM THE TOMB - Sure Paul Naschy is pretty well known
or being a werewolf, but this one seemed to fit so well. As the
reincarnated Warlock Aleric du Marnac he tears up the celluoid in
this one and I have a warm spot for it.

THE NIGHT EVELYN CAME OUT OF THE GRAVE - The first time I saw this
my jaw dropped. The lead guy who we saw murder women in the beginning
of the film is made out to be a hero because he catches the bad guys
who were out to drive him insane. Did anyone catch this, but me?
Weird.

- I have always made a bad habit
of buying films based solely on their titles. This one is so great
though. Jean Piat satrs as Buridan a war hero of who goes to
discover why young men are turning up murdered in . The answer
is mind bogglingly stupid, but the movie works. It's a cross between
The Three Musketeers and Erotrash to the nth degree. A true classic
that deserves an new audience. 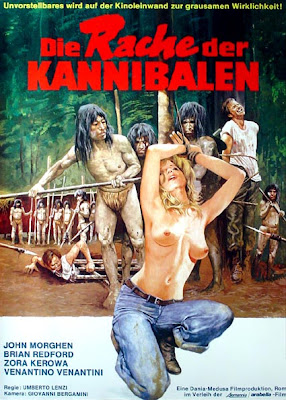