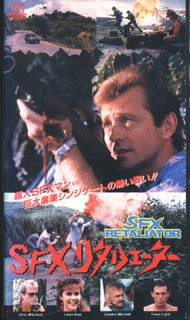 I've been a fan of this film since I first had it passed along by my pal Paul Cooke (whose Yor review remains a legend)... it has everything you could want in cheap action. Tons of ballistic sequences, Christopher Mitchum looking a bit bored as usual, Linda Blair blowing smoke all around and yes... dummies with machine guns!
Directed by Jun Gallardo this is a Manilla actionized version of F/X of all things. Mitchum bumps into a woman running off with a bunch of stolen money, things get mixed up, his wife is kidnapped and he has to save the day. With his dummies...with his haunted house...with his EXPLOSIONS!!
Great.
True fans of SFX Retaliator (aka, myself and Paul) can sing along with the great music that accompanies Chris Mitchum's meandering about looking for a woman with really big...flowers on her chest! Cheesy action music soars beneath a tale of how he must find a woman as bullets fly through the air.
Great!
Plus Gordon Mitchell appears as a mafia boss!
GREAT!!!
Here is Paul's review of SFX RETALIATOR for posterity and perhaps a little more exposure for this gem on the web. I recently read that both this AND the amazing Phantom Soldiers are available on cheap Dollar DVDs, so if you see them...go for it! 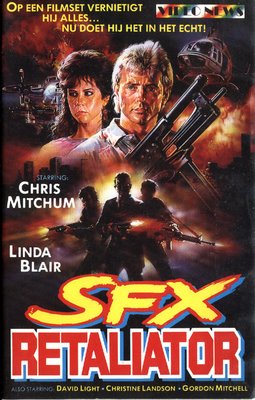 Give Christopher Mitchum any vehicle with two or more wheels and you can pretty much guarantee he will load that roadster up with firepower a plenty and in ‘SFX Retaliator’ its no different. He plays a movie special effects guy who just so happens to be driving his van along a passage of road when he comes across Linda Blair, trying her best to dodge bullets being fired at her by the mob. When you’ve just run away from a mobster with $1 Million in notes that belong to him you can pretty much expect the cavalry to come charging after you. Even more so when the mobster is played by none other than Gordon Mitchell. He plays the role of Boss Morgan, a man who gets what he wants and that of course includes fine ladies. In her post ‘Exorcist’ grown up days Linda Blair turns heads for different reasons , with assets that stack the odds in her favour. She plays Doris, a professional safe cracker who is out for revenge upon Morgan as he had her father killed when she was a young girl, witnessing the lethal event nearby. Siding with the opposing mobster head , Mr. Mancini, Doris is caught up in a battle for supremacy over who rules the roost over the territory. With Christopher Mitchum’s character Steve Baker rescuing her things become even more complicated , as he becomes drawn into the crossfire between both camps and the odds soon stack up against him!
If ‘SFX Retaliator’ gets one thing done right its in its ability to entertain on a budget that likely could be afforded to a high school Christmas play production company , even allowing for an opening night special guest appearance from someone like governor of California candidate Gary Coleman. Hey its ‘Different Strokes’ for different folks and the icky little fella was darned quirky at the ‘height’ of his popularity! With an opening sequence that immediately makes you aware of its basic intentions of production writing on the hoof its best to sit back , space out and go ga ga over the ensuing ninety minutes of bizarrely silly escapism.
Christopher Mitchum pretty much cornered the market for the lone distributor of retribution throughout most of his Action movies to date. Here, armed with a suspect shirt that screams volume control and a fake grenade , he ignites a plot line filled with gaping holes just with his stilted presence, but how welcome that is! Give him a walk through part and he strides along almost oblivious to the fact that he needs to act, heck why bother he’s got far too much on his plate to worry about remembering which film he is actually in. Many of the Filipino made movies he appeared in were likely shot on sets right on top of one another. Did he care? Do we care? Heck no there’s never enough quality ‘B’ movie watching time to go around so God bless him for just being da man!
Boss Morgan isn’t so enamoured with our hero and soon sends his henchmen out to bring Baker to him in order to retrieve his million dollar filled suitcase back. What they bring to him is his wife , and with her as ransom Baker has no choice but to seek out Linda Blair in order to exercise his need to make things right. Doris helps but in doing so risks all by stealing back the money from her boss Mancini , when he realises she has double crossed him things get hot. The heat turns right on up when the money that Baker hands over to Morgan , in exchange for his wife , turns out to be counterfeit! He has to call upon his own ingenuity with special effects and hands on experience with weapons to survive against both sides.
In amongst the manic miss mashed mayhem is a great on set moment, a film within a film experience, where Mitchum’s character is seen doing his job in handling the Action effects for a production. It is a moment for followers of all things explosive as he gets to blow up plenty of those infamous Filipino huts, the ones that often doubled for many an Italian made production about the Vietnam war. Fans of the genre will get a real kick out of this scene and a flashback sense of almost stepping into the shoes of one of the explosive Directing greats Bruno Mattei. A neat distraction and one guaranteed to bring a smile of appreciation. Throw that in with Mitchum’s home defence showpiece, as he takes a stand for home defence against intruders, and you are assured of getting a sound choice of wildness for your viewing pleasure. Mitchum mansion is a retaliatory fortress equipped to the hilt to see off all comers , picture a carnival caught in a chaos theory and enjoy the wild ride like a ghost train that won’t let you off if you’ve been bad.
Those with their brains pickled in a jar of happy juice next to their favoured armchair will get a moonshine jolt to the mirth receptacles come the closing moments, enjoy as craziness incorporated plays its final hand of woo haw wildness with excess in reserve. Mechanised movie mayhem reigns supreme as Mitchum turns out as a one man and a van arsenal of guns and gadgetry against the mobs underlings , finally getting to square off face to face with Gordon Mitchell. Delight in Mitchell’s expected demise , then grab the remote for a rewind moment that will tickle you long after any pair of woollen under garments received as a family gift this Christmas. In ‘The Exterminator’ if you were lying he’d be back , here Gordon Mitchell could never have expected what he would arrive in! Explosive Fun right up to the closing credits ‘SFX Retaliator’ calls out to be seen, if only to be disbelieved.

Ahh the Greatness of a Chris Mitchum Action flick. There's only one thing finer ... a Chris Mitchum flick Directed by Arizal. Now that Explosive viewing :) .
Keep up the Great posts Amigo. Paul

Final Score...all the way! I love the TANK that appears at the end of SFX so much it defies description!
Thanks for the great review Paul!

A Pleasure on the Review. As you say if more Folk get to hear about the movie our job of sharing 'B' movie goodness to the masses ( Okay a handful more ) is done :) .
That Tank sequence is as rib tickling as the line delivery that goes with it & almost as startling as Chris Mitchum's shirt :) . Paul

One of the greatest movies of all time. The tank scene is legendary.
I'm still looking for the DVD.

Thanks for the review!