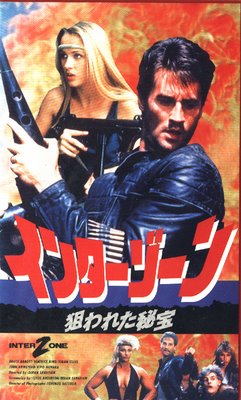 I'm back from vacation and lots of stuff to share. First off, my recent viewing of the jaw dropping Filmirage post nuke action/comedy/bizarro/trash film Interzone has been enhanced by a remixed review from my blood brother in arms, Paul Cooke.
I'm a bit of a Filmirage nut really, they have so many strange little productions-and for years I couldn't find a working copy of Interzone. Several tapes clonked out on me over the years, but my purchase of the Japanese VHS finally panned out. Directed by Deran Serafian (who was in Zombi 3 and now seems to have a strong TV directing resume with episodes of CSI, House and Lost under his belt)...this is perhaps the strangest of all post nuke flicks. Not strange as in bizarre, but strange as in it took me a while to adjust to it's own particular funk...with the emphasis on fun. Bruce Abbot (of Re-Animator) plays our hero with a carefree ease that can either be read as complete disinterest or marvelously flippant self realization that he is currently in a Filmirage production and needs to let go of all his desire to be eloquent and to instead just have a blast being the master blaster of the future. You get cut rate cars, a script that has mystic monks (named Panasonic and GENERAL ELECTRIC???), a Laura Gemser cameo, a giant woman that neeeeeeeeeeeds SEX from our man (glargh!), a great game of Drink and Die to start us off and much more.
And it is funny...and I hope it means to be. It has too be joking...right?
Well, I loved it. I'm a sucker of the beautiful Beatrice Ring and wanted it just for her appearance anyway. Also, this film has the FUNNIEST gay reference in a post nuke film ever. More so than the ONE'S domination in Warriors of the Wasteland even!
So without further waste of keyboard tapping, a thunderous Banzai Eye View of INTERZONE. Thanks Paul!
More soon, and hey...check out this weeks HORROR ROUNDTABLE as well. 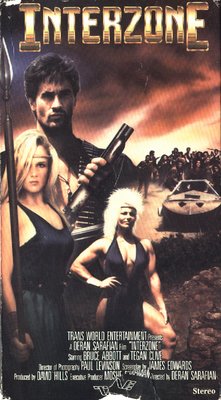 Interzone
Director : Deran Sarafian
Scripted : James L. Edwards & Claudio Fragasso
Starring : Bruce Abbott , Beatrice Ring , Teagan Clive , John Armstead , Alain Smith & Deran Sarafian
REVIEW BY PAUL COOKE
With the plethora of , ‘Mad Max’, low budget clones dominating the Eighties video rental scene Director Deran Sarafrian may just have been fortunate enough to have picked up Mel Gibson’s prototype Interceptor car, sold it on Ebay, and made his own futuristic outing ‘Interzone’ on the modest proceeds. Without question one of the most thrown together oddities put to film and featuring a cast of loopy characters the likes of which were surely never seen together again.
Should one day the almighty bomb ever actually be dropped and these people survive then humanity is doomed. Stars Bruce Abbott as hero Swan, and the attractive features of Beatrice Ring as Tera, clearly recognise what a no brainer movie they have signed up for and enjoyably play it for fun , lifting proceedings to the level of well intended daft entertainment.
The survivors of a planetary nuclear strike include a reclusive telepathic group who protect the artifacts of the old world in an area known as the Interzone. The zone is protected by a nigh on impenetrable invisible shield , but an offensive band of aggressors attack the boundary seeking claim to the treasures within. Led by Teagan Clive as Mantis, a dominant female body builder that if painted green would be number one contender for star billing as She Hulk. Her motley crew of followers include John Armstead as a Village People lead look-alike in the role of the moustached and very . The underlying gay theme often creeps out of the closet during proceedings with several amusing moments, and all very much in theme with the general silly tone of the film.
After Bruce Abbott ‘swans’ around for his introduction he then rescues Beatrice Ring from a slave trader , and together the two get involved between the protectors of the Interzone and the horde of scavengers. With a loopier than ever script from Claudio Fragasso things unfold in a truly bizarre alter-verse. When the keepers of the zone send out one of their own to help Swan in defeating the barbarian Queen and her followers we get introduced to the likeably cool Kiro Wehara as Panasonic , who notches up the fun factor whenever featured. Swan’s muscle bound mating session with Mantis is not all that he could prey for, especially as the reward is to be thrown into the hole where her ravenous pet creature awaits its daily feed. The sight of which can only be described as the resultant clay love child of Patrick Swayze and Demi Moore cast out from ‘Ghost’!
The movie is very much thrown together for a quickly shot turnaround and with the intent of making the best of a modest budget for most involved to then move on to bigger and better things. The bonus outcome is that in so doing all concerned just have a blast, and it pretty much shows in the crazy performances which reward the initially shell shocked casual viewer. A pre viewing alcoholic tonic is recommended to speed the process along for a more resounding experience , and that even zanier feel good factor.
Amidst the background of desolated landscaping there’s no better way to traverse this fictional land than in a patented scrap yard , after the bomb mobile vehicle. The oddity that is ‘Interzone’ simply has to be sampled with a multitude of beverages and several friends for that perfect end of the week, start the weekend right party. Look out too for what appears to be a minor un-credited cameo by Indonesian born actress Laura Gemser , who was making these kind of appearances long in the successful wake of her more infamous role as Emmanuelle , as well as many other low budgeted Eighties produced Euro exploitation outings.


For a truly obscure and bizarrely camp low grade futuristic outing ‘Interzone’ doesn’t particularly need to be on your must see list , but then again where else can you get to get to see a hunchback with a self detonating hump!?. A candy floss fun flick with a taste all of its own. Look out for a low flying detached hump coming soon to your zone!
Posted by David A. Zuzelo at Saturday, July 08, 2006

What better way to surf back on in from the beach than with a tital wave of Post Nuke insanity , a challenge to Pirates Of The Carribean in Teagan Clive's chest & a uniquely wild self detonating hump one time demonstration. Groovy as all heck & slapped down on this wild , wild web as only you could Amigo. Welcome back.