I had no idea that the Al Adamson flick Black Samurai (starring Jim Kelly) was based on a book...but a series of books? Amazing! And after a random post up from Curt at Groovy Age of Horror on Black Samurai #6 caught my eye I set forth to find myself some vintage blaxfusploitation! I snagged up book 2 in Marc Olden's series and was thrilled by this little tome. Clocking in at a thin page count that is thick with detailed asswhippings and further proof that the 70's Blaction hero could get ANY woman to bed him regardless of danger or common sense is a maxim worth more than a golden (kill)... The Golden Kill doesn't pull any punches and is entertaining from start to finish. 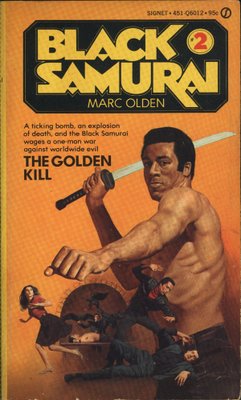 "One down, thought the Black Samurai. How many more before he got his hands on the man at the top...?"
Olden really pulls out the stops and throws down the prose as the reader meets up with Robert Sand, the Black Samurai...he is tough, he is mean and a loving machine as well. Brutally well trained by his Japanese master, Sand spends his time working for an Ex-President of the US called THE BARON now. The Baron has him on a mission to thwart a rich bazillionaire with a strange bloodthirsty sex life from kicking off an international incident to get his hands on some gold mining contracts. Chinese people are blown up with handgrenades, white guys get their genitals mutilated with swords, hawks slash and get slashed, a suit of armor comes into play...karate chops ensue! But wait...women are slapped, stripped and humiliated of course. But they seem to have this noble quality throughout...as long as the Black Samurai has "inspired" them with some wise words and wild stroking!
The book tears along without stops and is much better than the film would have led me to imagine. The Sand/Samurai character is well done without being overly corny and all of that wonderfully non-PC dialogue on race relations flows fast and furious across the page intermixed with action and intrigue to create a one sitting read that left me hungry for more.
Find this series...love this series...Black Samurai...FOREVER!

Did I say I loved this? I did!

"The Black Samurai was silent. It took more than reasons to kill a man!"
Posted by David A. Zuzelo at Sunday, July 09, 2006