Sue Shiomi is a Sister Streetfighting For Herself! 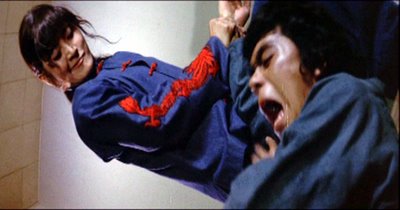 Sister Streetfighter...ah yes, the one that got tagged into the series in the US in chopped and rechopped watered down form. Sonny Chiba makes a cameo...that is all I remembered from the pan and scanned atrocity I saw years ago. But thanks to the guys at KuroTokagi Gumi I've found a new heroine! Not that I can't claim to be an Etsuko "Sue" Shiomi fan anyway (her appearances in tons of Chiba flicks can't be ignored, she's so cute you can't miss her)... but GODDAMM the uncensored version of Sister Streetfighter is amazing. Wackier than a sack of Kamen Riders, the Toei action crew shines here, tossing in bizarre villains and that ever present nasty streak of gore and things like the villains raping helpless good guys daughters to get information to keep things rolling during the short running time. 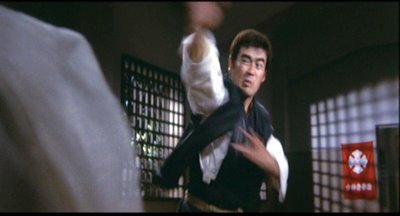 After learning her brother has fallen prey to the thugs he is investigating (they are selling...cocaine drenched WIGS!!), Koryu (our Sister Streetfighter) is sent to check things out and get to the bottom of the problem. Good thing she can kick ass, Shaolin Style! With the occasional chit chat and bad guy cackling to break up the fights you just can't beat sickle fighters, nunchaku nutjobs, amazons dressed like Fred from the Flintstones (and they do get some bam bam cracks in the head), Sonny Chiba popping in to suck air and release his hell punches on unsuspecting foes and a score to kick your face in, this is prime entertainment. If you think you've seen Sister Streetfighter, you haven't until you have had a nice anamorphic transfer subtitled in English and splattering in your house. Get it. 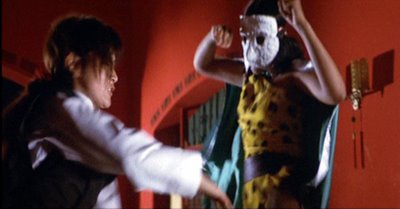 Amazingly, this is one of FOUR films in the series-and Kurotokagi Gumi has prepared all of them for your viewing pleasure. While there may be other subbers out there, you can always rely on Cannibal King and the Carnage Crew for the best quality there is. I highly recommend that any fan of Tokusatsu, Chambara or just violent and crazy Japanese cinema give the website a serious go through. You may be surprised at what you find!
I'll be back with more Sister Streetfighter thoughts tomorrow... So with an iron fist and a sharp inhale...I'm out!
pwwwhhhhhhhhhhhhhhhkkkaaaaaaaaaaa! KIYAAAA! 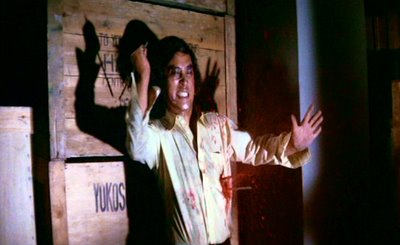 For the record, BCI/Eclipse will be releasing legit editions of the four SISTER STREETFIGHTER films in the U.S. before the end of 2006. Why waste money on bootlegs?

Well, then perhaps those who want to wait will be more excited for when the US versions arrive. Spend your money as you see fit I always say.

Well, I don't know how that relates to a two year old review, nor do I care. Put your name if you like and let the world know who you are before posting here.