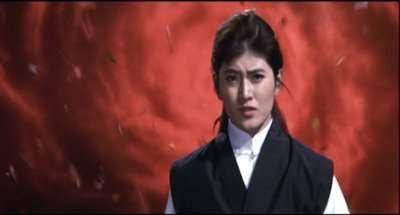 I'm back in the Toei groove with a look at the second of the four Sister Street Fighter peeks from Kurotokagi Gumi this week. I had my fears that nothing could touch the first film with it's bam bam aesthetics, but this outing keeps the pace of being violent, bizarre and action packed without a doubt. Etsuko Shiomi is back as Koryu, and this adventure (subtitled "Hanging By A Thread") is one that takes our girl to the limit. 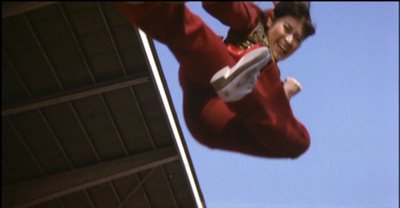 Koryu is sent to find a woman in Japan after we start out with a nasty eye gouging on what appears to be a cop. It seems the lass has fallen prey to a diamond smuggling ring. I'm not going to spoil anything regarding how they work, but this film gives the words "pain in the ass" a whole new meaning with some flinch inducing close up scalpel work on naked female flesh in the tried and true Pink Violence manner. The sleaze factor is high as Koryu has to kick/blast her way through a horde of ninjas (!!), nunchaku swingers and more. Friends aren't what they seem, badguys aren't as easy to peg, kling/klang sai violence abounds and that is only in the first third of the film. Of course, it all comes down to how many suckers can feel the wrath of Sister Street Fighter in under 90 minutes and how many strange opponents she can face. The film is no disappointment. Watch for one shuriken style scalpel slinger having a VERY BAD DAY after trying to tag team Sue Shiomi with a spiky fingered bad chick as his partner. It wouldn't be a classic without one massive dismemberment, now would it? 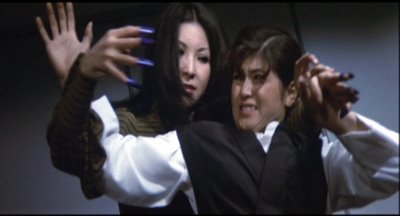 This film is a bit different from the first in that it is actually darker in many spots. Perhaps this is Sister Nihilistic Fist or something... At the outset the viewer gets set up with lots of happy upbeat bits (argh, kung fu kid!), only to suddenly be pitched headlong into ass slashing, eye rending and head cracking that not only serves the evil gangsters right, but also pushing Koryu into a place where she stands to lose her friends and family... and it's a toss up as to who gets beat down worse here. Shiomi shows off not only her kicks and punches (and smile naturally), but gets to have a few great meltdowns as the anger and hissssssssssssssshaa breathing comes out of her in Chiba-esque fashion. 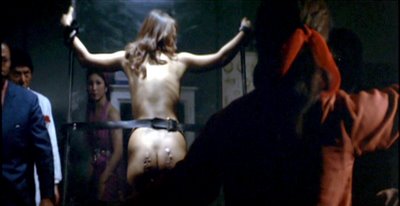 Another beautiful anamorphic transfer, another Sister Streetfighter that left me hanging by a thread for more. Viva Shiomi may not have the same ring as Maestro Chiba-but the asses get kicked all the same. 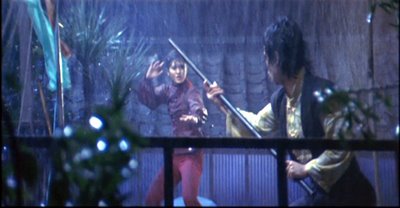 haha...alright, spoiler! We have a drunk scalpel slinging surgeon slicing asses to hide diamonds in here. Gross, but it sure does make for some strange scenes ;)