It's Friday... Let's Check in on JASON in Four Color Horror 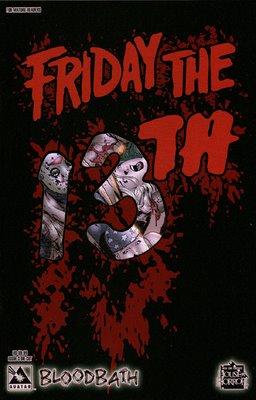 A few posts back I reviewed a Nightmare on Elm Street book from Black Flame, and the multimedia blitz for New Line's House of Horror series continues today with a look at Avatar Press' recently finished mini-series entitled FRIDAY THE 13th - Bloodbath. Written by Brian Pulido, who is most known for his work at Chaos! Comics where he Co-Created Evil Ernie, Lady Death and many more-this series does it right. Using the established conventions of the slasher genre wisely and not playing them down as "silly" or abondoning the original ideas of the series, Pulido puts a nice set-up / knockdown together. While I'm not crazy about "nefarious corporation attempts to capture Jason" as a rule, the trick is in the methods they use. Starting out as a typical F13 outing at Camp Crystal Lake, the latest batch of troubled kids/counselours pair off, get naked and get killed by Jason. But a smart pair realizes that everybody fits together perhaps too well. I mean, doesn't anyone else find it funny that not only do all the teens at Camp Crystal Lake arrive horny, but if the slasher gods are smiling there will be at least two well endowed girls who are willing to try to see how they enjoy the bi-sexual lifestyle? It's a convention... but a fun one. Anywho...
Something evil is afoot, and the guts start flying without any more hesitation. Climaxing with what would be a budget shattering showdown that involves Jason using a HELICOPTER BLADE to chop down his foes, it's all good fun. Of course, Pulido's story would fall flat without a strong and unrelentingly grotesque set of sequential storytelling, and thankfully Avatar stalwart (and creator of one of my fave books in Widow) Mike Wolfer is on hand to hurl entrails all over the page. I like his work, and he brings it home here with solid and clear style. His eye doesn't turn away or pan out thanks to the MPAA, and now we don't have to either. GORE-JEE-UZ.
Avatar's books have been quality presentations, though I found the initial one shots (F13, Nightmare on Elm Street, Texas Chainsaw Massacre) to be too brief to really work... the mini-series (and hopefully collected trade) format gives the characters that we know and love a wider swath of destruction to blaze through. I'm looking forward to more. Check out Avatar's site for more information and if you enjoy Freddy's nightmare stylings be sure to give the still in progress NoES - Paranoid with art by Ryp a shot.

Jason... take us home! Be sure to click the pic for a bigger version. 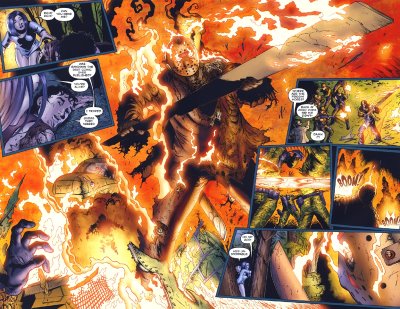