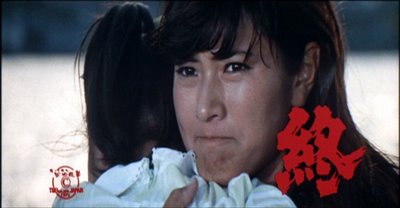 Finally...Sister Streetfighter 3! With the above image we bid farewell to one of the greatest action sagas I've witnessed from Toei. I'll miss her, but know that she is just a disc away forever now! Etsuko Shiomi is forever immortalized now.

Before we get to that however I want to congratulate my friend Curt at Groovy Age of Horror on his 100,000th hit! Amazing-one of the best blogs on the net (and inspiration to this one by the way), I'm already looking forward to the next milestone for him. Great work and Essential Reading. 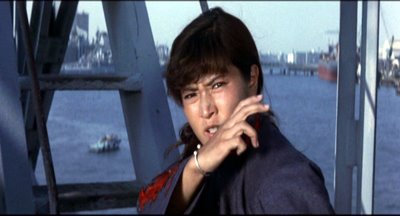 Now then, Sister Streetfighter 3 is the finale of the series, though there is a 4 listed in some reference I can say that I watched this film and it isn't a patch on the original films, nor is it related. So, onto the good stuff.
Koryu returns to action with the typically good opening sequence of punching and kicking in a funky setting (more mirror images of course)...but being so far along in the films the makers know we want, nay... demand, action. And within 140 seconds after the credits the plot is set up and fists are flying. You can't beat wakka wakka guitar mixed with Etsuko Shiomi WackAhhhhhhhhhhtah on random guys for little to no reason...can you? 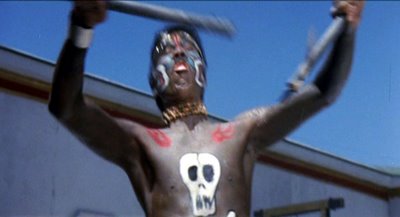 Pay attention filmmakers, this is what I like!
Getting involved with yet more "missing" people who are forced to work for bad bad men, this one adds an element of Motherly Streetfighter as Koryu has to care for a young girl that is being left aside since her mom is forced to work and bed the head honcho of one handed evil doers. And it helps that she can manufacture GOLD as well. And...well, that is it for plot. It's short (under 76 minutes) and loaded with fights between oddballs and our girl (sometimes joined by a kung fu gal sidekick even). A little character development goes for the king of kickass villain as well, because he isn't ALL bad in the end. 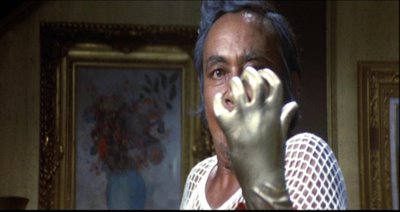 Not as nihilistic and fistic as the second film, and not as wacked out and over the top as the first, SS3 is a suitable end to the series and at least keeps the action count high and the body blows frequent. Shiomi is excellent as usual and joins Moon Lee as one of my favorite screen femmes officially now. The Sister Streetfighter Trilogy is one of those special action events that come to DVD only so often, one I know I'll revisit and share with my friends who just THINK they have seen it all.
GO KORYU!!!
SISTER STREETFIGHTER... She'll Steal Your Heart Before She Shatters Your SKULL!

Thanks Dave--and you're doing a great job here yourself!