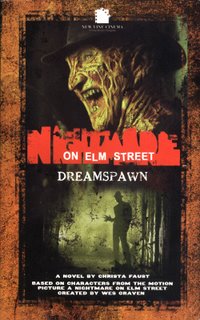 A slight movie break for Mr. Z as the week rolls on busily, but I did get to finish my latest reading material with the New Line / Black Flame Library book A Nightmare On Elm Street - Dreamspawn. Now I have to admit that I really love the idea of these New Line books. Black Flame is providing fans of the "classic" slasher era a chance to enjoy some new (and perhaps expanded away from both commercial censorship and budget restrictions) stories of the famous maniacs. The writers have the opportunity to take these characters new places, and though the results have been mixed, it is usually interesting at the very least. I'll cover a bunch of these in the coming weeks since I think I've managed to scoop them all so far, at least the ones that interest me. We have not only A Nightmare On Elm Street, but Friday the 13th and Jason X (whowouldathunkit?) Interestingly, the best results have come from the least likely series...but more on that when we get there.
I was VERY excited to see Christa Faust's name on Dreamspawn (and now F13-The Jason Strain). Faust is an ass kicker (and dominatrix/world class trampler) with balls to spare. If you don't believe me, you can read one of my favorite stories from her for free right here. It's called ROADKILL (and was reprinted for you collectors by Chanting Monks) and it really got my attention. If you like it, hustle over to Shocklines and grab Hoodtown, you won't be sorry.
But... Dreamspawn does something that seems to happen a lot in the books. Instead of using the conventions that made the series popular, these elements are abandoned all to quickly. My enthusiasm for this line is that the conventions can be used and expanded upon, not discarded and abandoned. That has happened in the movies, as good simple slasher fun is hard to find, why should it happen in print as well?
In Dreamspawn the writing is excellent (the opening salvo is intense to say the least), but as a Nightmare On Elm Street story it left me feeling a bit cold. Freddy barely appears, and ends up having his trademark glove held captive, resorting to a Tire Iron instead. Granted, that is a nice brutal blunt object, but I'll say it again.
But...
After an intense Freddy sequence to start us out, the novel follows a group of girls who float on that ever fun edge of "outcast" in high school. We have the slightly goth obsessed Jane, who collects death photos and makes funeral wreaths from her hair. Lola, the gorehound who wants to create special effects and more. Add in a hunky boyfriend who is really a wonderful fella who draws his own Mexican Lucha character (hey, I can never get enough Lucha, this was cool)...and it is a fun read.
A fun read that seemingly forgets Freddy for nearly 200 pages! Once the dreamaniac arrives he doesn't quite seem himself, though it is nice to see him more in line with the original burnt child killer of the first film than the stand up comic of later entries. After spending nearly 300 pages to get there, the characters drop in short sequences and the ending for Freddy isn't exactly what I'd call clever. So again...
But...
Faust does something very interesting after the story is "over" however, now that Freddy is discarded with ease and spends a good amount of pages with the social reaction to the final Freddy rampage that leaves a high school essentially dead as told by a dreaming television. Sounds silly in synopsis, but it works better than nearly any Nightmare On Elm Street element in the book. Go figure.
Though I wouldn't recommend this book from the series very highly, given how much I like Faust's writing I'm already cracking open The Jason Strain for a read-perhaps Friday the 13th will let her cut loose and show a feel for the material.
Posted by David A. Zuzelo at Thursday, April 13, 2006