It's Friday... the weather is nice and it's time to Big Boob Bust Out

Ah Friday... and a nice package arrived from HK Flix today in record time. That package reminded me of another warm and fuzzy day when I recieved a blowout priced disc of the (in my house) immortal Big Boobs Buster. AND, since the weather is nice and my 15 month old son and his dad were out girl watching this morning it also reminded me of BBB in a nice way. So, here is a review of the ultimate in Japanese goofy humor-the kind of tale that makes you appreciate exactly why it's fun to traverse the globe looking for something weird and unique to entertain yourself. This review is from a few years back, but it holds true.
I love this movie... Have a great weekend, Sister Streetfighter 3 will be reviewed shortly and we'll begin our look at the revised Reverb Of One Shot-The Revival of the Francostein as well! 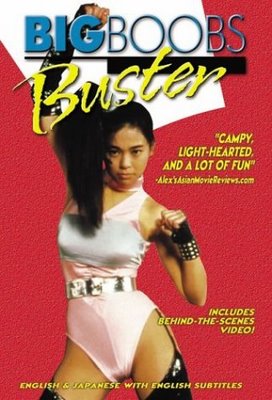 "I’m sure you can sew and cook like a good girl… but… I just can’t stand flat chested broads."

With these words, Bando the class stud breaks the heart of Masako. She just wanted some love… but no. Her chest may be straight, but her mind is now warped beyond reason. She must take REVENGE! Blissful revenge…but not on the boy who broke her close to the surface heart, but on the floppy udders off all the girls who have made this happen! She steals The Big Boobs List from the requisite horny janitor and sets off in her new FunBag Figthing duds-out to take the big bust molds and keep those naughty and haughty girls in line. Disguising her shortcomings by putting Bean Paste Buns in her bra, Masako is ready to fight for the dignity of all that is flat.

After a few successful attacks and subsequent shamings (along with some orgasmic wiggling from the girls who get foamed down and molded), Masako targets the wrong girl. Never mess with a 36 D track star silly girl, because she ends up massaging Masako and giving her a new purpose. You will never ever guess what that is...

To run in a track meet. And defeat a girl with giant breasts… Yes, you read that right, and they are made of muscle! Very impressive! Yes! It all ends up happily ever after and many breasts are molded, exposed and the schoolgirls go wild for each other. Truly classic. 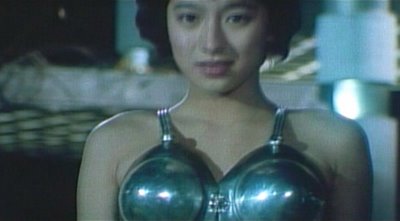 "If you seduce another man with those huge jiggly wiggly tits…I’ll parade this bust mold all over town!"

Alright, get with me here… if you like Japanese schoolgirls, topless hijinx, superheroicly clad girls, fan service style panty shots, girl wrestling and lesbian massages in your 45 minute mini-movies, then we ought to form a bowling league. Stop quivering at the thought of the fun of this film and just get the movie. All others need not apply.

"The Boobs Buster… she really turned me on, maybe I’m gay?"

This short film is a shining example of the unique Japanese sense of humor that many if not most Japanese people I know are so ashamed of! Fast, funny and featuring many of the stereotypical anime characters you know, now come to life. You won’t be absorbed in the plot, but you are sure to laugh at the jokes. The "action" is silly at best, with some female wrestling stuff and lots of gel covered nipples to go around. With a title that would suggest far worse than it sounds, this film strays out of the "hunter" mold of Japanese cinema, and doesn’t have a mean spirited boner in it’s cinematic body. It’s actually a bit of a relief, because this film seems to have a reputation as being a real sleaze fest… but it’s not. It’s happy go lucky fun that happens to involve some high kicking, nipple licking and titty sticking action. Good stuff.

I’d be curious to see if Tara Maki, now known for producing the popular anime Millenium Actress keeps this one on his resume! Obviously, he did pretty well with this daring and brave film, as it escaped the V-Cinema ghetto to an extent and has found it’s way to our shores. And it now comes in TWO flavors flatty fans! You can watch the original Japanese language version, which is funny…or you can go all out and watch the new English dub track. This dub does the seemingly impossible, it adds a VERY raunchy and surprisingly funny spin to the whole she-bang. Sounding similar to one of those dubs on MXE (the Spike TV import of Takeshi’s Castle), with lots of randomly added lines, scurvy and sassy words for breasts and even some goofy songs! Classic, and it makes things much funnier in my opinion. This dub alone makes it a mighty marvelous must have in my opinion.

Also included is a making of documentary which features Harumi Kai skinning her knee and a great out take which has a scene finish up while on actor, Toru Minegishi, just keeps on eating as they break down the set. Hey, the extras have a funny dub track as well! Swell fun for those who like to be swollen up with laughter!

"Damn your raunchy bra…damn it straight to hell!"
Posted by David A. Zuzelo at Friday, April 14, 2006