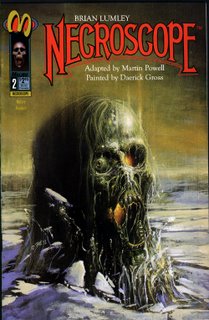 Brian Lumley's writing is always fun in my opinion, he takes a pulpy approach to his work that I find endlessly readable. Vampires (excuse me, Wamphyri) mingle with international intrigue in his Necroscope books, Sword and Sorcery collides with Cthulhu in Primal Lands and lots more Weird goings on make for entertaining nightstand shudder pulping. Myself, I'd love to see a Titus Crow series of comics-there certainly is enough material to adapt and the character is open ended enough to create new adventures for as well. But Lumley is reknowned for the Necroscope series and in 1992 the now deceased Malibu Comics decided to take a whack at that series in sequential form.
Necroscope is a big series, with big concepts-easy enough to adapt one might think, however the first book is also very character driven-something that would have to be reworked and rethought for the panel to panel version. For the most part, they succeeded.
Adapted by Martin Powell and painted by Daerick Gross-the structure of the story remains intact as E-Brancher Alec Kyle is contacted by an apparition that tells him of the future, the past and the present all in one session-laying out the groundwork for what would become MILLIONS of printed words. Powell chose well, focusing on the two main characters and sacrificing a bit around the edges. Harry Keogh (our protaganist) and Boris "The Brainsaw" (as I call him) Dragosani have their "secret origins" revealed with the arrival/realization of Keogh's powers and what he can do with them coming to light as Dragosani seeks to first master an ancient woodsbound Wamphyri-and then cope with the fact that he has been bizarrely impregnated by it. Oh, and he can saw open corpses and tear out their secrets as well. It all goes along fine, however the final third of the book (which is where the action really begins) is smashed into the final issue-leaving a lot of talk and a hurried climax in the re 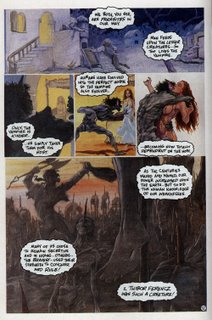 aders mind. Overall, a nice visual tour of the original novel (for those who have read the entire series, I bet that first read was some time ago)-and a good introduction for new readers who are curious but don't want to attempt to read the surely over 7500 pages of text to date. And yeah, there is a new novel coming as well...
Beautiful covers by Bob Eggleton, who does all of the distinctive skulls for the novels are a highlight. Too bad Malibu got sucked under in the comics abyss of the 90s, someone should sweep up this property and do it again. There are 3 issues of Necroscope 2 that I can find (with really nice art by Dave Kendall)-but it appears that it was never finished.
I got em for 50 cents each at a local comic shop, so if you like vampires and want to taste the Necroscope saga without the eyestrain...give it a try.

3 Scarab Beetles from the Sarcophagus!

Can't say in this case I'm enamoured of the interior art - guess it's horses for corpses - now if Enzo Sciotti had been weilding the brush - it would be a different matter - your overview was really appreciated - stunning stuff.

I remember when this style of art was very popular-the downside to a lot of the guys doing it was that it looked stiff as hell in lots of cases. Not too bad here, but I preferred the second series artist.
Now I discovered ANOTHER short lived Necroscope comic came from Caliber with art by Vince Locke!