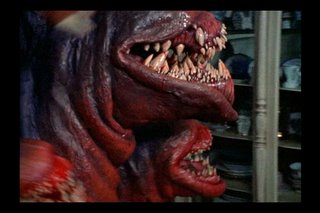 The joys of DVD seem boundless sometimes don't they?

One of the great backyard (or basement to be more exact) films is available for monster lovers everywhere on a tiny shiny because yes... The Deadly Spawn is here! Blissed out monsterific fun, thy name is Spawny. If my son ever gets the movie making bug this is one we will have to watch and define what success from meager resources can look like with a whole load of creative tinkering and audacity.

After a little meteorite makes a big honking noise in the woods upon crashing, two nearby campers quickly get chomped by something rather monstrous sounding. Outer Space Hell comes to . Well, if it isn’t hell it’s a three-headed monster packing some tadpoles of doom at least. Seeking the warmth that only a basement can provide the monster sends out a legion of spermatazoic styled killers to munch on elderly vegetarians, devour those who cross paths with them and to chase the people who live over the holy basement of Deadly Spawn’s kingdom. You may begin to celebrate the apocalypse now!

It helps that a good cast of characters with interesting little lives occupy the talking and gesturing section of the film, the screenplay revels in the old school moster conventions with gusto. We have the science guy who wants to get the girl, the doofy non-scholastically inclined buddy, the psychologist who is babysitting…and a boy who just loves horror movies 'natch. All meet a toothy monster who speaks the silent language of FEED ME and provide apt blood filled fodder for our fun! 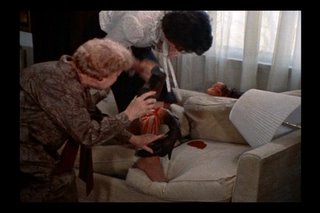 I love movies with kids that love horror as protaganists. If you are reading this I'll bet that you'll smile along as the shrink tries to get the lad to feel awkward by asking a series of questions that shows the horror fan of the house as the smartest of the bunch.

The monster antics can be summarized "Chomp Chomp fizz fizz and OH…what a relief it is." The groovy spawnlets gory up old ladies just fine, but once the big honking monster makes it’s way and starts biting and tearing-we have crossed over into some of the best conceived and executed microbudget monster sequences of all time. And that ending… I’m still waiting for Apocalypse! Spawn… a real sequel for the ages.

Deadly Spawn is a horror fan film for horror fans from frame one. Violent and gory with a touch of nudity, a smattering of in-jokes for the horrifically inclined and a splattering shrieking spookshow that isn't afraid to just be offensive-it’s breezy easy fun. I love it and if you have NOT seen this one you really should. Now is the time brothers and sisters…Spawn up!

Puppeteer / FX supervisor John Dods Spawn monsters are a fine reminder of why low-tech works so well in some cases-with THE THING IN THE BASEMENT conjuring up Lovecraft at a Five and Dime Store blowout. The scenes of the Master Spawn chasing our heroes through a small hallway are always going to make me smile. Mix in the groovy ghoulie tunes from Perilstein, Cornell and Walker and it's a monstah mash…

A great movie, hands down, and that brings us to the DVD. The Synapse Films DVD is what I'd call a Digital Miracle. The transfer of the film is simply stunning, and yeah that term gets thrown around a lot (along with "edge enhancement" and other nonsense that many people don’t truly understand)…but it’s true. I dropped my Fruit Loops when I noticed there was rain (or a small hose) behind the first puppet, setting up the a plot point I never noticed! Wild. 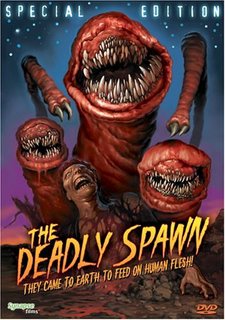 Fans of the film will be happy-and first timers will be treated to something I never believed could exist, a nice stable image on this film. Windowboxed to avoid any matting issues I have to extend my thanks for this because there is nothing worse than mutilating movies for anamorphic playback if the film wasn’t originally meant to be that way. Every splat looks great and hey… I could even see a few little manipulating sticks poking out of the spawnlets. Sure that isn’t "good" but it’s great fun.

Extras? Oh yeah, plenty to go around. Two commentary tracks, the first group one being very rowdy and fun to listen too and the second with producer Ted Bohus is a bit more informative at times, but doesn’t have the same manic energyt. Both provide a good vantage point on the film and are worth enjoying. Tons of behind the scenes stuff include a camcorder shot visit to the effects set of the film (with some fun goofing off along the way), an alternate opening sequence with some new effects, outtakes and a cool comic bookish prologue as well.

A solid package from top to bottom and priced right, this is a must for monster movie fans worldwide. MunchaBuncha Spawn for your next Deadly Matinee of Delight!

We got a promo copy of this one at my work, I let another horror fan grab it since I've got the vhs. Great movie.

ain't it though? The DVD has some neat bonus stuff that you should check out when your co-worker is through looking at the disc.

Thanks for the GREAT review and comments!--Ted