Cooler than ICE, Man! THE ICEMAN! 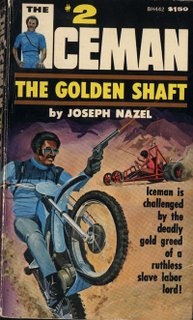 "And then there is that special calibre of man. The man who molds his own life. Who shapes his own destiny. Who stands when others, nursing their apathy and fears, are seated. Who runs forward while others hide. Who is heard, even when silent. Who is felt, even when absent. Henry Highland West, The Iceman, tall and handsome in his Blackness, is that kind of man."
-From "SLICK REVENGE-ICEMAN 3"

1974, a very good year for American action cinema, and Blaxploitation movies were hotter than the summer streets! Keeping the grindhouses packed with thrillseekers looking for strong characters talking shit and enough smacking down the man to satisfy in 90 minutes, films like Coffy, Foxy Brown, Hell Up In Harlem, Slaughter, Shaft ruled the screens. These and countless others are still popular for their mix of street cliche and action motifs with abundant NPV (Nudity/Profanity/Violence). With the buzz on the street so strong, Holloway House presented "The Exciting Black Adventure Series" ICEMAN penned by writer Joseph Nazel. I first ran into Holloway House and Nazel via Groovy Age of Horror's review of THE BLACK EXORCIST and snagged myself a copy. Nazel's style hooked me from the start. Simple and credibly streetwise, this zany novel played like a harder edged crime version of ABBY... I needed more, but horror seemed not to be his genre. Cue up my love for those old pulpish Executioner/Butcher/Raven novels... it seemed Nazel had done an action series. And what a series ICEMAN is. 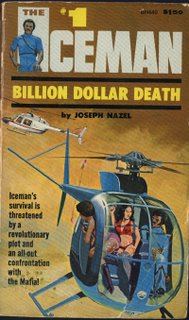 To say it's Afrocentric would be an understatement... Iceman is cool for the use of conventions (he's a sort of pimp, sort of hustler, sort of superslueth but all around cool cat) and is told at a more gut level than most of the blaxploitation era films could convey. Nazel's perception of Harlem and his vivid descriptions are more powerful (and credible) than perhaps Jack Hill or Robert Clouse could ever hope for. The slinging of slang is thick, but never cuts into the narration and patters across the page with perfection. If only they had made a film of this series (I could see The Hammer in this role easily)-it could have been a breakout success. It's never too late for a part Bond, part Shaft...all BLACKTION extravaganza in my mind.
The books focus on the adventures of Henry Highland West, a Harlem kid proud in his Blackness (Black is always capped in these tales) who overcomes the overwhelming odds and works his oversized mind and overtough fists to create THE OASIS, a desert resort for the ultra-elite. It's all very "over!" Monitored by his all female army of fighters, lovers and bodyguards Smith maintains his own status by keeping ahead of his guests with a supercomputer. 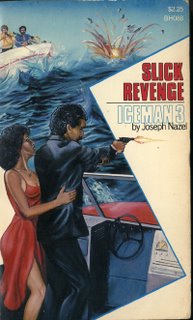 But it's never easy wearing your light blue tracksuit, hanging in your dojo and mastering the art of love with women from around the globe...oh no! Iceman will ALWAYS help a friend, be it fighting THE MAN as he tries to infect Harlem with bad gas in Slick Revenge, battling THE MOB in Billion Dollar Death, helping a beautiful woman out of a jam in THE SYNDICATE'S recording industry or even grubstaking a hapless guy that leads to Iceman having to fly to Africa to put his boot firmly up the asses of some slavers...the series never lets up. Dune buggies, Helicopters, car battles, gun battles, fist battles, kung fu battles and whole lotta caddy driving and shit talking from a pimp pal named Christmas Tree are simply the beginning.
I love these books...
So, if you like your reading fast and want to get a good feel for what the real words on the street during the 70's were like, grab yourself a big helping of Iceman.

"Christmas Tree made a mental note to get a new paintjob or a new Cad when the job was finished. He knew that as soon as the Iceman got his message, he too would be on the set. The shit was about to fall!" 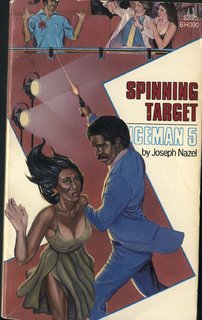 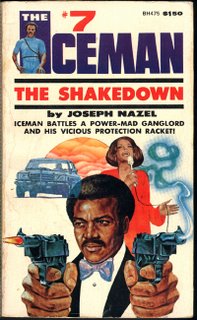 WOW!!--great review! And you got these straight from Holloway House?!?

Thank ya GroovySifu...you can order books from Holloway it appears. I did one today and they had the two Iceman's I don't have yet. I figure I'd let the order happen and if the service is good I'd pass along the good news.
Better than 8-25 dollars each for sure!

Thanks for the reviews David. I got into these '70s serialized action novels last year but had to stop collecting when I ran out of room however I'm going to have to scour E-bay for this series. Have you seen the "Black Samurai" series that was published at the same time??

I haven't seen those, they are on my short list though. Be sure to check out The Ninja Master by Wade Barker as well. Good sleazy stuff!

Enjoy them K2jr, I recently finished up Slick Revenge and though it isn't the best I've encountered you have to see the page that features not one, not two...but THREE monster KIIYAAAAAAAAARYHGGUUAAA moments with Ice's trusty Nunchaku (and the custom pockets in his light blue suit to house them).