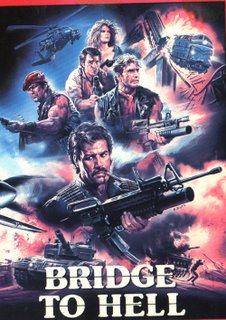 Pardon me while I enthuse...
HOLY CRAP...CLICK ON THE PICS BABY!
Enzo Sciotti mania is now official. First I found his little signature on the ANTHROPOPHAGUS poster and now I'm learning that he is responsible for MANY of my favorite images.
This guy is the Jano for eurotrashers like me!
So, I've found a ton more and I'll be posting up the big, the little, and the obscure. Today we have some SEX and VIOLENCE to share. Action violence to be specific! I love me some Italian Action Cinema...and Sciotti is the king of the posters. Lots of hunting for signatures and images to be accomplished, but so far I've found a goodly sum. Why blow it all at once though?
First we have two action flicks with BRIDGE TO HELL and JUNGLE HEAT. Bridge To Hell is a fun if not exactly classic bit of WW2 eurotrash with Andy Forest (of Mark Of The Scorpion) and it features a goodly bit of Fabio Frizzi music as well. The old Cannon Video also contains an intro by Micheal Dudikoff, and if the American Ninja ain't cool I don't know what is.
JUNGLE HEAT is a classic indy HK flick loaded with gore and action which this poster does total justice. This scan is the Japanese VHS, the best version I've found and in full scope unlike the recent German DVD. I'll review the film shortly... but today is Enzo's day in the sun (with many too follow!) 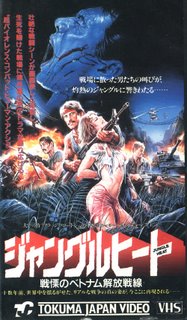 Then we have us some softcore sex the D'Amato way! These Filmirage flicks are what I call PISS AWFUL, but I've enjoyed both of these entries on more than one occasion. Yeah, I'm a masochist with a VHS remote... Blue Angel Cafe is particularly hard to resist as Tara Buckman WARBLES her ass off singing in a leotard. Really. Buckman isn't much better in High Finance Woman but she looks good naked as nature intended-so, easy enough to tolerate. No singing though, which is sad. If you look closely at HFW you can see the obscured signature on the second step.

My hats off to Sciotti again today...and just wait until the next horror post. Lets just say one word.
DEMONS! 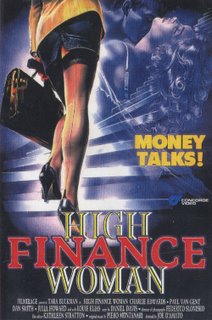 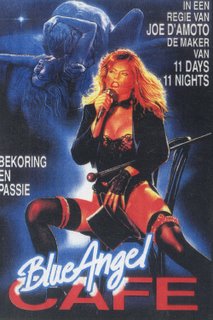 It's always great finding a new poster or cover artist to love!

Not too long ago I reviewed two books that had nothing to do with each other--until I realized that they had the same cover artist, Lou Feck (whom I'd never heard of before then). Coincidence, or was I just really tuned in to and groovin' on his vibe?