Another Friday...and a review of one of my favorite HK flicks of all time. So, Tomb It May Concern, I took a look at the sadly neglected but oh so good little film...JUNGLE HEAT! Enjoy!

Directed by Jobic Wong
Starring Sam Jones, Christopher Doyle and a bunch of guys who get killed in horrible grisly fashion!
"Three weeks training and you expect us to fight the V.C.???
YOU BASTARD!!" 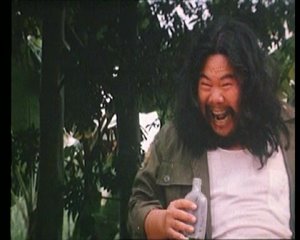 This gritty and grim (and cheap) production is everything you can ask from a grim and gritty cheap film! Loaded with fun characters, dubbed voices that you know, gore galore and action sequences a plenty (wrapped in a Sciotti poster package) Jungle Heat WILL satisfy your need for violence in your action cinema. Heck, they even throw in a game of "Will The Burning Rat Set the VC Drenched In Gasoline Ablaze" just for fun in one nasty bit that will damage quite a few gentle viewers. I've known many a person who has desired an uncut print, and it appears that the Japanese VHS version and the composite German DVD would be just that. While it still seems jumpy in the narrative sense, which may simply be bad filmmaking or distributor recuts, the gore and violence levels are certainly beyond the norm and rival the more bizarre films of for balls out insanity. If this is still missing stuff, then I can't imagine what it would be. 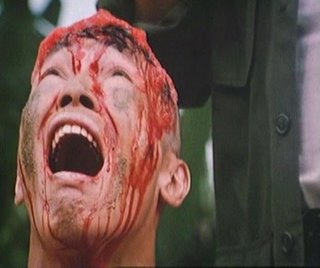 While it skimps on plot, the film does have character. Nguyen is put in charge of helping to find men to drive some US Army trucks to and fro as troops abscond from after the war. After some unruly guys are roped in and selected for cannon fodder a kindly soldier decides to train them. Hey, it’s Sam Jones…FLASH GORDON! Anyhow, he puts the men through a training program and teachs them how to fight and drive like soldiers. Of course, we know it won’t be enough to save them, but these scenes are entertaining as the motley crew engage in cross country racing and various kung fu lessons. Actually, it’s hard not to like the guys--and just knowing they are going to get picked off once they are trained is actually a downer. Did I mention the local game of driving motorcycles under logging trucks for money? We’ll get back to it, because once the mission gets underway, those tricky V.C. quickly pounce and capture our boys.

Then things get bad. 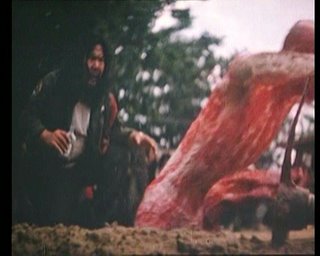 The Evil Commander is played to scummy perfection by perpetual fatty bad dude Mui Sang Fan and he sure does like tormenting his captives. After he accuses one of our hapless heroes of trying to escape (which is something we don’t see) the movie jumps from action film to downright splatter classic as he buries the guy up to his neck in the sand in the sun. Oohh… bad. Then he shaves his head! Ooohhhh…worse. THEN he takes a razorblade and slits open the top of his head! OOOOOOhhh…REALLY BAD! AND THEN he pours acid through the hole…until the sorry sonovabitch LEAPS OUT OF HIS F’IN SKIN!!!

And that is just before the halfway point when Jungle Heat gets hot with action sequences, gory saw murders, a hellacious escape by tearing apart your own hands, Sam Jones Fu, Fiery Rat Roulette, Fatty’s Vile Behavior and an ending that will make you go…awww no. NO!! NOOOOOO! Remember that game that leads to various bodies getting squished and crushed by logging trucks? It comes back to haunt you in the end!

It is what it is…and Jungle Heat is pure Tough To Kill madness and fun. Violent and fast paced, this is man-sized entertainment that isn’t afraid to throw some huge snake on the characters just to watch them squirm. And don’t even get me started about how far I ejected my soda from my nose when they pulled out the giant bandsaw fu! Far from classic, any fan of gory action will get exactly what they want… and it certainly doesn’t leave any itch unscratched or any characters unscathed.

While I can’t compare the mysterious Jobic Wong to any director of serious talent, I will say that his willingness to heap on the melancholy for his heroes alongside the obvious glee he takes in killing them off is unique and exciting…good on him, he really created a low budget classic that sadly is more talked about than seen. The rare Japanese VHS is presented in stunning 2:35 scope for those mad enough to track it down (hey, I did!) or you can grab a copy of the German dvd here:

GETCHA SOME JUNGLE HEAT AT XPLOITED! 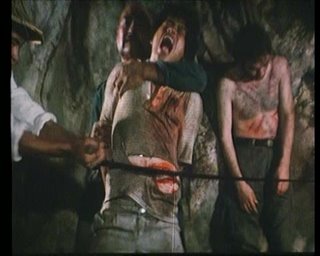 EDIT! This came from the comments section and offers some great information! Thanks to this poster...

It should be noted that the American commander sending everyone off to die was played by none other than long time Wong Kar-wei cinematographer: Christopher Doyle (Australian)!

Oh, and the English dubbed version of this film uses some of the same library music that American director George A. Romero used for DAWN OF THE DEAD (specifically the theme during the training sequences) and CREEPSHOW (the disco song "Don't Let Go," in particular).

Most of the film was shot in Southern Taiwan.

It should be noted that the American commander sending everyone off to die was played by none other than long time Wong Kar-wei cinematographer: Christopher Doyle (Australian)!

Oh, and the English dubbed version of this film uses some of the same library music that American director George A. Romero used for DAWN OF THE DEAD (specifically the theme during the training sequences) and CREEPSHOW (the disco song "Don't Let Go," in particular).

Most of the film was shot in Southern Taiwan.