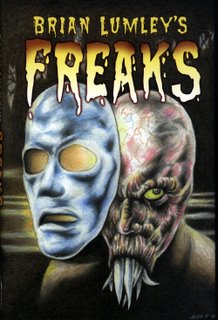 One thing I love about Brian Lumley is that the man isn't afraid to sling around lots of exclamation points in his prose. I touched on the Necroscope saga here, and though I'm a fan of the series it is hard for me to top pure reading pleasure by saddling up with some of his short stories. Subterranean Press released a slim hardcover collection (under 100 pages!) entitled FREAKS that contained tales focusing on Freaks (hence the title), with a twist of several of them being post nuke tales (for which I have an uncontrollable weakness). Sure, it was 35 dollars for the signed limited edition, but a fan will do what they have to I guess.
Included in this volume is a good foreword (equating horror without freaks to porn without pussy) and 5 tales. Illustrations are provided by Allen Koslowski, all of which are nice compliments to the stories. The collection starts strong with "In The Glow Zone" (1977) which pulls a nifty first person narrative trick (fooled me!) as a child tries to cope with life in a wild post nuke world...or so it seems. This is a great short tale that achieves both gory success and holds the "weird" vibe throughout. My only gripe is that the illustration for this entry is placed to early, revealing the twist before the reader encounters it. The illusion is shattered and it spoiled my first reading entirely. Nice art, great story...terrible presentation.
Thankfully, this doesn't happen again as Problem Child (1974) shudders it's way to unlife in quick fashion, followed by the disappointingly ordinary dystopian sci-fi style entry "The Ugly Act" (1988). I was as elated to find "Mother Love" (1971) next, it's a great blend of post nuke survivor horror with a scuzzy character intruding on the seemingly helpless life of a little family only to get a grotesque square up for his sins. Awesome fun and Allen K hits the illo perfectly as well. Closing out is the very Basket Case-esque "Somebody Calling" (2004-and unique to this collection)-a sensitive portrayal of...nah, a grotesquely sensitive portrayal of the plight of Siamese twins and the desire to be more than discarded meat no matter who you are. Even though it stays true to the nasty nature of the freak tale, Somebody Calling reads very differently than the earlier entries. No surprise since it was written thirty years later than Problem Child perhaps-and a solid closer.
While FREAKS is a collector's book, it stands as a nice collection of shorts... for the more casual reader that would like to sample Lumley's non-million word works, try out Beneath The Moors and Other Dark Places or The Whisperer And Other Voices. Actually, both are available at Amazon for a combined price of under 20 dollars!
Posted by David A. Zuzelo at Sunday, March 12, 2006