Congrats to our contest winner, your Ascension of the Blind Dead Chapbook is already shipped. I decided to ship along a second copy of the standard edition because of the close timing of the first two responders...thanks everyone! I hope the stories are enjoyed and I'd be thrilled to hear what you think of it.

The name of the fine eurofemme I was looking for was Maria Perschy, who was in several Naschy vehicles (including the wonderfully insane Hunchback of the Morgue) as well as Ghost Galleon, the third and somewhat underrated entry. A few images from that one, and the first is now framed up for me after it came from Offaleater this Christmas! 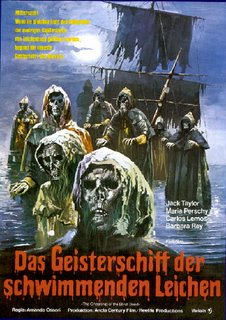 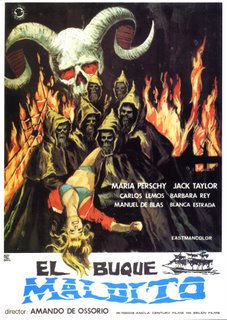 Beautiful eh? If Ossorio's series didn't generate some amazing poster art, I'd be hard pressed to pick another set of Eurofilms that did! While Ghost Galleon gets the least respect, I love it for it's mix of model ships and Jack Taylor with the lovely ladies fawning over his moustache if nothing else.
Fantastic stuff...

I figure a little extra image helping is in order this fine Sunday night, so here are a few more Enzo Sciotti entries to feast your eyes and click your mouse over. 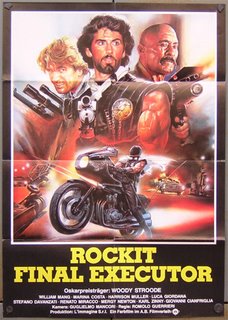 The Final Executioner is a great little post nuke film by Romolo Guerrieri, it has a lot of cool action sequences and a fun performance by Woody Strode to boot. Most curious is that it doesn't fit all that well in the little subgenre as it really plays more like a revenge/slasher movie in many parts. It was hacked apart and reworked in the easily attainable Bronx Executioner version, which I don't recommend until after you see the original.
And then we have this great artwork of David Warbeck looking very actioned up for Antonio Margherititi's awesomely cool Hunters of the Golden Cobra. Made in the 80's boom of Action films out of Italy, Antonio M. (Dawson) was on fire with this, Tiger Joe, Tornado, Jungle Raiders and Raiders of Atlantis firing out in quick succession. Be sure to go to Antonio's son Edoardo's stunning tribute to his dad at Antonio Margheriti dot com 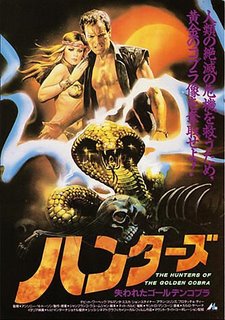 What's amazing is how well the Blind Dead in the movies live up to their depictions in the posters!! Oh, and Ghost Galleon's my favorite! ;-)

It's so true Curt, they look amazingly moldy and just plain rotten. My favorite bits are when the puppet hands come into play personally.

I'll always love Return the best I think, but Galleon is just a blast of pure eurotrash.

I own the German poster for Return, and I think it's the best of all of them.