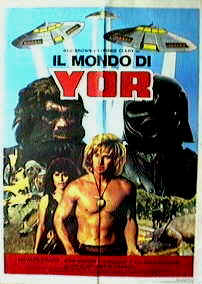 When I look back at all the trashy flicks I've flickered across whatever screen I've possessed over the years a few stand out. Pure barmy bizarr-O films that I can enjoy at any time.
Yor-The Hunter From The Future is one of those films.
Perhaps it was seeing it long before I knew who Antonio Margheriti was (and now I have the highest regard for the man...he created some of my all time favorite films), perhaps it is the sheer AUDACITY of the movie or just maybe it's the mix of caveman action, Reb Brown in a wig and a song that just screams that it is YOR'S WORLD...HE'S THE MAN!
Or, maybe I'm just a silly silly guy.
Regardless of reason, Yor is always there for me, so I'll be there for Yor. But Yor has given me even more than just 90 minutes of pleasure on occasion... there is a small cadre of Yor-O-Trashers out there. Guys like Vince (who creates a Yor's World site for the world, though it seems to be down now)...guys like myself (those with love for the swinging Ken doll that stunt doubles Reb)... and a special guy like my friend Paul Cooke.
Paul is one of those rare Reb-els that manages to wade headlong into cine-du-fun and always make it MORE fun with his wit and strange insight not just into the films, but the enjoyment of them. NOBODY reviews a film the way he does... and to quote a Pillsbury Fro-Boy wrassler..."That's cool."
But there has always been more, a missing hole in the Yor Klan's Kollection though, an aching pit of despair if you will...for Yor was not a simple movie.
No.
It was a TV Miniseries!! But where to find such a thing? After years of waiting, searching and pleading with the big TyrannoGods and Overlords I opened my mail to find a little dvd-r from Paul marked... "It's All Yors"
And there it was, the long version of Yor! Hours and hours of Yor in Italian to be enjoyed...
But better yet, Paul has also cut a review up for this edition that he was meant to write...
So, welcome to Yor-An Inspiration, a week long celebration of YOR-THE HUNTER FROM THE FUTURE!! I'll dig out my huge 4 sheet French poster (with art by Philippe Druillet!), we'll do some reviews and celebrate the big fella. I'll get some screencaps of the newest Yor sequences I've seen and make a party of it. 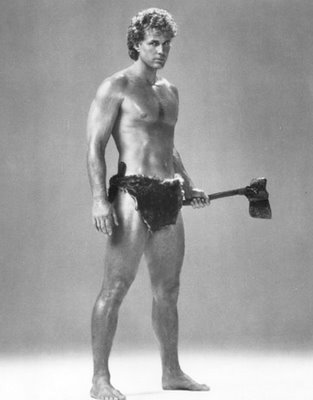 Tomorrow we start the honYorifics with Paul's review, a titanic celebration of Reb Brown's wig and one eyed wonderous beasts that wrap around Yor's leg (and much much more!)

I have a copy of Yor that I bought with a box of horror tapes, guess I'll have to give it a watch.

I have completed an MST3K style treatment of Yor, Hunter From the Future.

I'm looking for the 3.5 hour TV version - that would be great to see.