Albert Pyun, the maverick mayhemist behind the camera for some of the most unique cinema I can think of is always near and dear to my celluloid driven heart.  He has a new website RIGHT HERE that you can check out.  There are lots of good reasons to pop in and see some new things, some older ones and definitely some new looks at some of his better known flicks as well.
I've definitely written a lot about him over the years, and have a shared blog called THE PYUNIVERSE as well.
But you know how blogs go.  Things slip down into the cracks of time and get lost. This blog has nearly 1000 posts!  So, I'm going to give the man a bump for the next few days and maybe you'll discover a new film or be encouraged to check out an old one. 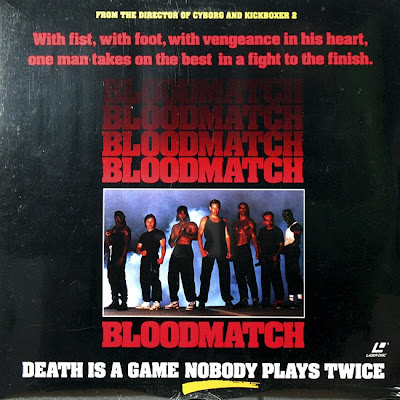 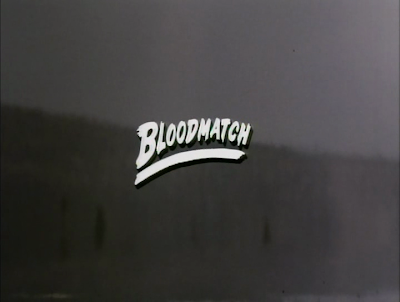 Brick Bardo is pissed off. Really pissed off.  Good thing he is played by Thom Matthews, who gets to put his Friday The 13th gained skills in to action as the damn near psychopathic fist n' foot flinging nutjob who is on a trail of vengeance.  After his brother is killed for not fixing a kickboxing match he is out to find those responsible.  After torturing a guy in the middle of nowhere for the opening 10 minutes of the film he gets a short list of names.  All kickboxers, all champions and all ready to participate in a Bloodmatch...well, they better be, because Brick and his lady friend are setting them up and kidnapping them all.  Some get sexed and snatched, others have family threatened and some are just damn curious as to why the hell a guy named BRICK is so pissed off. 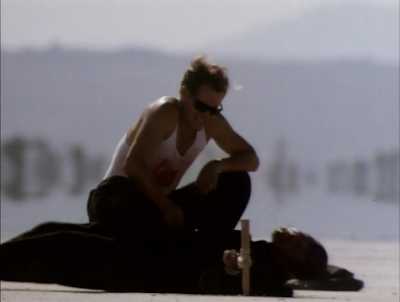 This takes about 45 minutes to play out, but it is sort of fascinating as the action quotient is down to nil so far, minus one nifty fight that includes Vincent Klyn as a bad guy.  But it isn't the action (in a kickboxing film??) that sold me on this one.  Thom Matthews is excellent as we watch Brick Bardo's mind unravel in his quest for vengeance, blinded to the reality that he is now far worse than the people he is punishing he just devours up the script and spits it out with total commitment.  Oh, and he rivals the best pro-wrestlers out there for putting on his "rrrrrrrrrr...I dislike you very strongly!!" face. 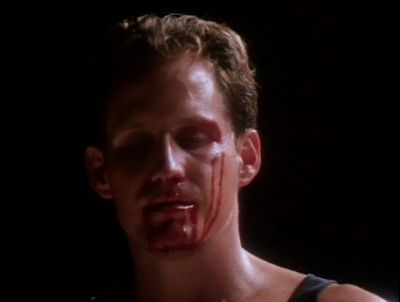 The promised Bloodmatch section of the film fills up the second half of the running time and is a mixed bag.  On the plus side we have a great bit of screen kicking and battling as Brick faces off against Benny 'The Jet' Urquidez, and each fight actually carries the story momentum that Pyun and crew have built up to be satisfying.  Brick becomes more repugnant than the four "guilty" parties-which has a screwy twist in the end to boot.  Honestly, it all gets a little unclear before leading up to a final battle.  But, you can salvage a plot twist that goes awry with a good fight.  It isn't a great final battle, but again-the kickboxin' berserker that Matthews portrays is so demented by the end you can't help but root for the "wrong" side!  I'm sure this was the intention and it really plays in to my "Familiar Tropes, Strange Takes" theory of Pyunotronic Cinema-viewers looking for a fight flick to pass the time with may be surprised by what they have here.  Disappointed? Possibly. But if you are in the Pyuniverse you might be going in the opposite direction-avoiding it because it appears to be just another fight film.  That would be like calling Deceit a Trancers style film-sure you have cops from odd places and fights, but they are nothing alike. 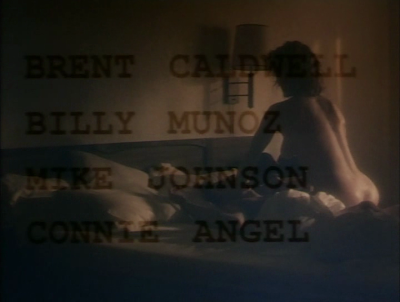 The upsides consist of Matthews as Brick Bardo, one of the more memorable characters in 90s kickboxing cinema, some cool Riparetti cues, cameos by Klyn, Qissi (ain't no Faux Po here baby!) and the always welcome Benny The Jet.  Also, I've begun to see that Albert Pyun really seems to shoot most of his sex scenes from the same angles and finds women with bodies that look good from behind.  Hey, here in the Pyuniverse we get in to minutia. Marianne Taylor may not have done a heck of a lot, but George Mooradian and Albert Pyun could light and film her ass(ets) with great skill.  Overall, I'd call this a film that has enough strength to overcome the weaknesses.  But there are one or two parts that erode the complete success of the film. 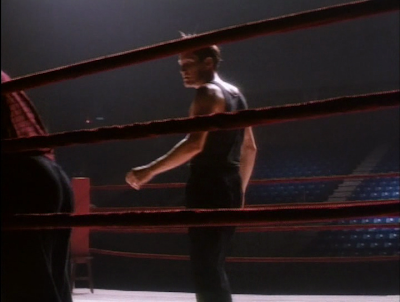 I'm not going to pick on Hope Marie Carlton too much, she looks good and handles most of the dialog well enough. That final fight though...kickboxing champion is a tough sell when you look like you are lining up to play with a beach ball in a battle to the death.  Bonus though for not being shy in front of the camera.  What definitely bugged me however was the editing. I get very itchy when the CHOP/EDIT/CHOP/EDIT school of kung fu fighting is employed, but Bloodmatch has a very unique spin on that.  Very unique.  In most of the fights almost EVERY move is shown 2 to 4 times from different angles.  Uh...once in a while to punctuate something cool, I get it. I actually like it. Low kick (x4), Low kick (x4), punch (x2) and fall (x3) should be input for a Street Fighter game and not in the editing suite in my opinion.  Most of the fighters look way more proficient than this and if it had only been used to cover up the Carlton Fu I would be good... Somehow the Urquidez fight overcomes it however...maybe I'm just a big fan of The Jet and was missing seeing him in action. 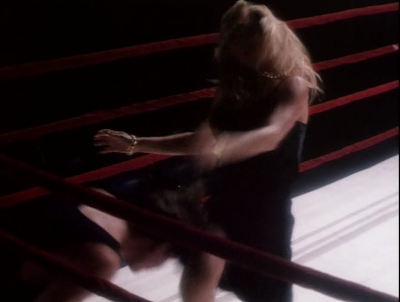 Overall, Bloodmatch is not the greatest kickboxing movie you could find, but it is funky and odd and unique and ambiguous and well acted for the most part. It has nudity. It has fights. It has you wondering what the heck is going on!  I recommend it if you want something totally strange that also has kickboxing scenes.  Hell, it is worth watching just to see Thom Matthews grit his teeth...and then kick other guys teeth out!
Posted by David A. Zuzelo at Monday, August 01, 2016

Both Albert Pyun and Ulli Lommell each share careers where they started out with highly respected name films but then started to descend into extremely bizarre lower budgeted genre films(with BLOODMATCH being the start of Pyun's travels to that very film realm[of sheer low budget weirdness]) .