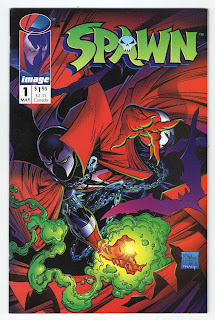 Time for something new from the TOMB IT MAY CONCERN sequential sarcophagus.  I recently decided to start checking out SPAWN when Erik Larsen joined up with Spawn's creator, Todd McFarlane for a new arc that brought a returning from crucified exile Al Simmons, the original Spawn, back to the forefront of the comics.  Frankly, I missed a lot. And I mean a LOT.  Larsen brought me back and it was uncanny how easy it was to pick up in the 250s of a book, when most current big 2 titles are utterly confusing at #3!  That got me thinking... a lapsed Spawn reader no more!  Thanks to a long box full of old trades and later digital issues, I can revisit the whole saga, and even pop up reviews of the book as it unfolds. Some of it familiar, but much of it not.  In the trade waiting age, looking at a book one at a time feels like a really interesting task.  And the question is, will my SPAWN POWER COUNTER actually be able to go from 260 (as of now) to 0 before I drop dead?  We shall see...
The context behind Spawn one is well known, and if you need me to explain, there are plentiful resources (search IMAGE COMICS FORMATION) and you'll see why this book in particular was a BIG DEAL.  Does it hold up?  TO THE SPAWN ECTOMOBILE!

After the disappointment of McFarlane's SPIDER-MAN #1 (also known as DOOMDOOMDOOM the book), I was intrigued to see how he tackled creating a NEW character, and to be honest, it holds up as a very well constructed first issue with no meandering, though events do jump around a little bit as the mysterious caped and confused Spawn lands back on earth, slowly recalling just who he was and how he ended up a demolished demonic dude in an alley with nowhere to go and no clear mission.  Using a neat structure which appears to this day, a series of news reporters give us sanitized CNN style reports, a more conspiracy laden second reporter and...a gossip and style report!  It's clever because in ways all of their information is true and McFarlane was careful to place Spawn in a greater Image context by mentioning that his cape was very out of style compared to the characters in Rob Liefeld's YOUNGBLOOD book.  Also introduced are the detectives that would later go on to have their own really solid book (penned by now Overlord Of Marvel, Brian Michael Bendis), Sam and Twitch. It's gruff chubby donut loving tough guy and skinny cerebral detective banter galore as a vigilante is taking out local mob bosses.  But wait (and yes, it just keeps hurling details at us)... Spawn realizes in the first issue that he is an deceased Mercenary / Special Forces soldier named Al Simmons, and his wife being at his funeral prompted him to make a deal with...something. And that something has obviously tricked him...  A big evil pops up on the last page to let us know that he is right, and the fun has just begun.

It's a solid book that holds up even more than ever in the age of overtalk and expanded storytelling. SPAWN #1 would take 3 to 6 issues in today's world, I'm convinced, but any reader can check this out and know EXACTLY what drives Spawn, a good bit of who he is, the world he inhabits and also drops some subplots in.  While I can't say the dialog qualifies as GREAT comics writing, structurally, it's a good issue and it makes me want to read more. What more can you want?

The artwork is vintage McFarlane and he is lucky to have Oliff on colors and the great and so very Spawn letttering of Orzechowski which really stands out in the presentation of Spawns personality and resolving confusion. MANY years have passed and McFarlane's work becomes more detail oriented as we go, but there is not one unclear or overproduced panel in the book.  Really, this is a fine example of how a first issue should go.  I want more. Only 259 to go...  The Spawn Power Counter is also introduced in this issue, but is obviously counting down FAR TO QUICKLY for the book to have run even a fraction of it's now thousands of pages. I'm looking forward to seeing how that is removed down the line very much.

Of interest is the fact that the Image Firsts re-issue is the issue minus the Steacy paints.  I love Ken Steacy art, but this re-release is pure cool. 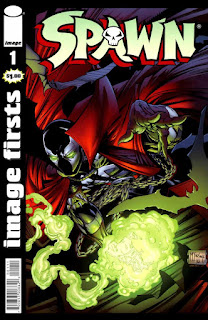