Flesh For The Inferno Unleashed!

Scorpio Film Releasing has somehow slipped my radar for too long, after FUTURE JUSTICE made me want to stand up and cheer, a few quick Facebook checks brought me to Richard Griffin and I was a bit boggled by just how much work he has done. And it's local to me as well? Amazing!  The wrath of Eibon would intervene and the world premiere of his latest film, FLESH FOR THE INFERNO was screening about an hour from me.  How could I miss it?  Only stopping on the way to fill up on beer and chili (what else?) before heading to the Route One Cinema Pub, it was a night of full throttle horror with plenty of laughs.

FLESH FOR THE INFERNO has a wonderfully simple premise, one that horror fans, particularly of the Eurotrash Cinema bent, will appreciate. When a pedophile priests nocturnal emissions are uncovered by a gaggle of habit hauling sisters of the cloth, the trio of pious power attempts to intervene on behalf of the children.  Things go a bit sideways for their plans and after a quick shot to the forehead slows down mother superior, the putrid pastor goes full on Poe (or for me, Fulci) and bricks up the ladies of love into the basement of the catholic school that they have invested their souls in. But...what if they decided that maybe UP ain't as good as Russ Meyer promised, and they turn their eyes, crosses and kick the holy habit for an sacrilegious sanctuary in the arms of (say it with me...) SATAN SATAN SATAN?  Well, shit hits the fan, that is what happens! 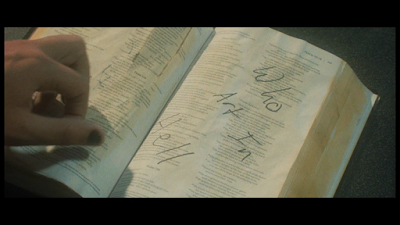 Enter, the victims. Urrr...the heroes. No...the cordwood of carnality? Nah... The cast of characters that attempt to survive a GRUELING FIELD TRIP OF HORROR.  That works. We have the beautiful lead that you just know is going to be our final girl in Kat, the pious prim and perhaps not entirely proper holy roller gal that gets a deep look inside herself, the couple that can't keep pawing each other (and you know that Sister Mary BeatYerAss always wants five fingers for the Holy Spirit!!!) and one smart / funny you know the girl is gonna love him but doom is all that waits nephew to their somewhat unhip but interdimensionally timewarped mostly fearless leader.  Add in some funny cops that love donuts but hate cliches and hooker with a love of soaps and a body that will get you in a lather and it's carnage city.  And a great performance by Sean Leser as "Just Halsey" as the coffee swigging guy that knows the crew is fried. 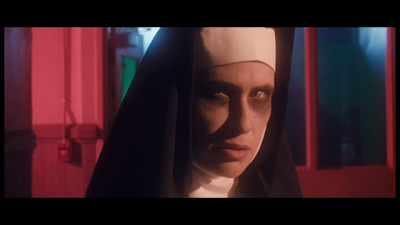 The wicked sisters get to their work as the field trippers struggle to cope mentally with the fact that killer nuns are out to make them into flat little Eucharistic wafer Hor d'oeuvres for their masters delight. And woah, do they ever put these guys and gals through the paces and makes the stations of the cross look like playtime.  Gut puking, eye gouging, nails nailing and long fingernails flicking, it's a non stop assault of Old Testament proportions.  And there is one of the most entertaining "possessed corpse comes a'knockin at your door" scenes I've ever witnessed. Note: Do not call 911 about demons trying to demolish you while an unliving apparition attempts to recreate the interior of a jelly donut with IT'S FACE! You will not be taken seriously. Life lessons courtesy of Scorpio Film, kiddies.  This brings us to a rip roaring conclusion with what is one of the best Satan's I've seen on screen, not just in a long time, but maybe ever. Whipsnap dialog and perfect delivery brings Old Scratch to lurid life and in the end...how much flesh can be spared when the anger of the innocent is unloaded upon the earth?  Maybe a little...but would you really WANT to live after all this? 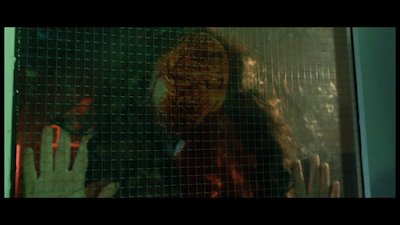 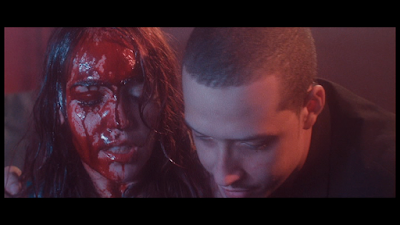 FLESH FOR THE INFERNO is a perfect Halloween film for all horror fans. Not being overly familiar with Richard Griffin's work, I find it really striking that he and his crew have a sensibility that outweighs the budget or even subject matter.  I am one of those viewers that really hates horror comedy films, and Flesh isn't that at all. But, just as FUTURE JUSTICE was entertaining for it's obvious love of it's post apocalyptic milieu, FLESH... brings a genuine gusto to gutslinging without sacrificing atmosphere or, and this needs to be noted, being genuinely ENTERTAINING to it's audience. Never mocking of the tropes of tribulation that horror film victims endure, it feels like a party for all the pieces of the films we love, done with respect AND attention to the right details.  The laughs are in the right spots, and that certainly goes to the screenplay by Michael Varrati. It's not easy to write, and director and editor (which is equally important in a film where timing in blood splashes are just as important as dialog flashes) Richard Marr handles it with an ease that seems invisible. There are no moments where this feels like it's trying to hard to do what it can't, and instead finds an identity that is all what Scorpio Film Releasing has been in my experience.  It's unique, and I think it's going to really make it's audience happy at the end of the brief yet complete running time.  All the performances are spot on, making the swing from knowingly ironic to guts out screechingly ghoulish.  Anna Rizzo really makes Kat shine, and lifts the film up on her shoulders for a fantastic finale with the overlord of darkness played by Aaron Andrade. With a film that has so many laughs, the final fade out is classic horror with enough dread to leave you waiting to see if the credits are going to roll. Knowing where to start with horror is important, and having the feel for exactly when to stop is the underrated trick.  It all works perfectly. 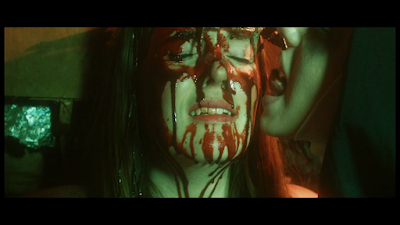 FLESH FOR THE INFERNO is a film forged for fans, but hardly a fan film, it looks and sounds fantastic and will definitely give any viewer that wants evil nuns wreaking havoc to assault their senses...and you'll have a God Damned Good Time for sure! 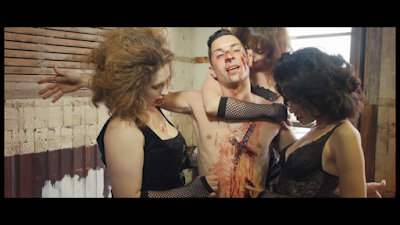 You done sold me on this one!!