It's October again, and it's time for another HALLOWEEN HORRORS!!!  I love this month, because each and every year I take time to slow down my slide into cinesludge and get back to the genre that started it all for this cinemanic soul.  From lying flat on a staircase to peek over my parents shoulders at Howard Hawks' THE THING FROM ANOTHER WORLD when I was 5 to today, the fun never stops.  So...in we go.

First up, a TRIPLE SHOT of millenial horror.  I've wanted to see the Ghost House Pictures PG-13 film, BOOGEYMAN since it was released. But that was..wait a minute...9 years ago???  There were several DTV sequels and I live for that kind of stuff. So, when a triple DVD set appeared in a budget bin for half off the 4.99 asking price, it was hard to look away.

BOOGEYMAN was a theatrical presentation and it looks it.  High gloss visuals with lots of camera swinging and flinging can't disguise that there is absolutely nothing surprising going on. A young boy sees his father killed by The Boogeyman (in a pretty effective opening sequence) and later, after much therapy, decides to return to his home to confront his fears. Thankfully he also gets to bring his less than super understanding girlfriend AND meet up with an old friend who obviously has feelings for him. Romantic subplot? Check and checked off...not much there to really enjoy.  But wait..a ghost kid appears too?  OK...tropey trope trope'n up the path.  But wait, the Boogeyman IS real and he is back and ready to rampage all over the guy and his girls.  Yep..that is about it. 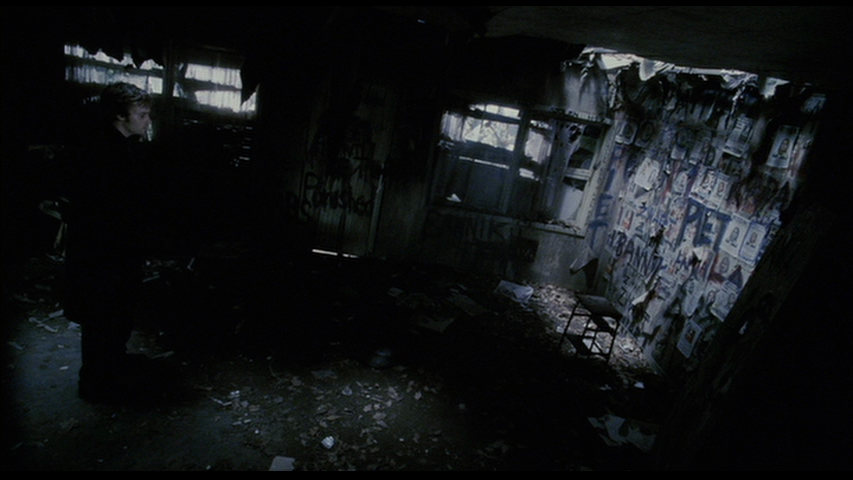 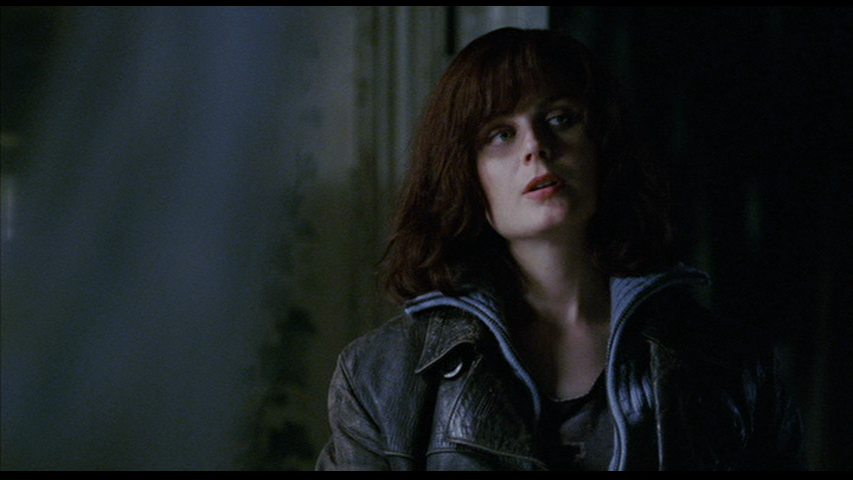 BOOGEYMAN is not a bad little 90 minutes and it's got a good cast featuring BONES actress Emily Deschanel reacting to some offscreen shenanigans every few minutes.  It was fun to see Lucy Lawless pop up early on as well.
What struck me was just how similar it was to the Nightmare On Elm Street films, and how good even the least of the Freddy films really is for keeping the pace moving.  Under 90 minutes, it still lags a bit.  Once things pick up and we get some warping through reality stuff and actual attacks by a CGI (mostly) Boogeyman it's fine, but the monster has no personality and the intensity level stays low.  However, I must say that I really enjoyed ONE scene that had actress Troy Mussett reappear from what we assumed would be certain off screen doom as she is REGURGITATED by a bathtub.  THAT was unexpected.  So, it's a good 90 seconds and a bunch of bland.  Here...this. 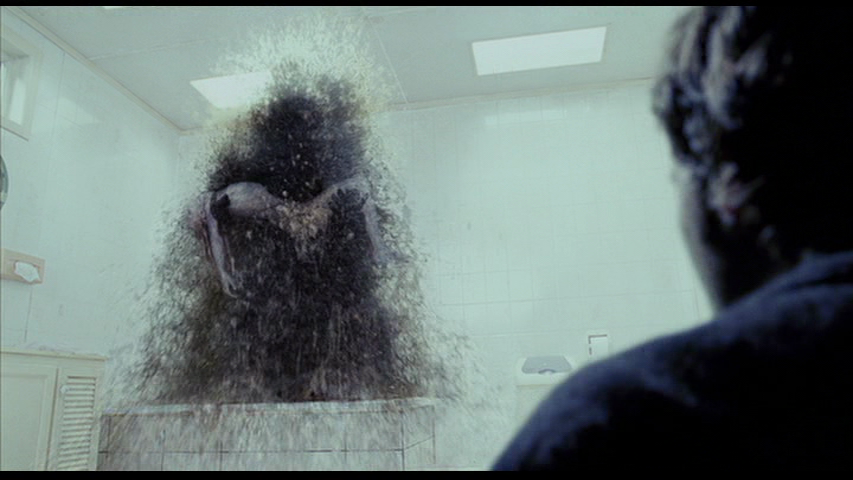 It was with heavy thumbs that I began to THWAP at the remote to start BOOGEYMAN 2, but in tried and true DTV warrior fashion, I summoned the courage of David Warbeck attempting to win the Vietnam War in THE LAST HUNTER and pounded PLAY with vigor. Hey, it's an UNRATED DTV movie with a completely different creative team.  And you know what, THIS one is pretty damn good.  It plays around with the idea that you have seen the first film and have to acknowledge that BOOGEYMAN exists, but then gets a little funky and takes a left turn or 5, so that it doesn't just end up where it starts.

Henry and Laura Porter share a trauma, shown up front, as their parents were murdered in their homes when they were young.  It MAY have been the Boogeyman, but it doesn't appear that it was more than a home invasion. After Henry leaves a treatment facility, it becomes obvious that Laura needs help with Boogeyphobia as well. Yes, they actually say that.  So, swapping places, Laura checks in and finds out Tobin Bell is her therapist.  Wow. I'd leave, but OK...she stays.  As the original film had elements of Freddy-tude, I was pretty intrigued that this film seems to go right down the DREAM WARRIORS aisle to pick up some groceries.  Cutters, agoraphobics, overly romantic self loathers and Boogeyphobes collide as suddenly, the doors lock down and something is killing the patients (and doctors...and nurses...) 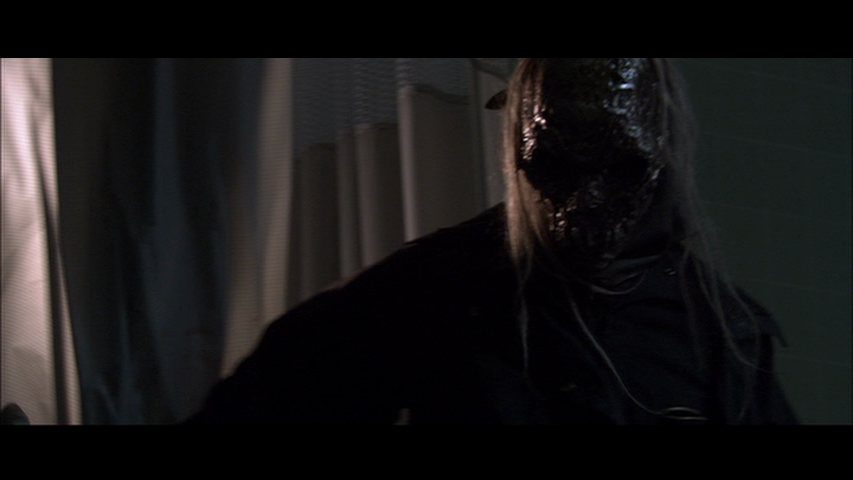 I actually don't want to spoil much, because if you are going to watch ANY of these, I would highly recommend it being this one.  It's VERY gory (it even grossed me out a touch in spots) and veers all over the map between traditional Boogeyman is gonna get you stuff with elements of a SCREAM / SAW variety sprinkled on top.  Director Jeff Betancourt is an editor and it shows here, lots of fast paced scenes keep the pace fast and furious and everyone plays their part well. The inclusion of real physical effects instead of non stop CGI is very welcome.  Unlike either the first or third, you'll definitely get your moneys worth out of this entry.  It stands completely apart of the theatrical feature, so...here you have it.  Besides, fans of going "OUCH" with their gore will want to see what THIS THING does!  YOWZA. 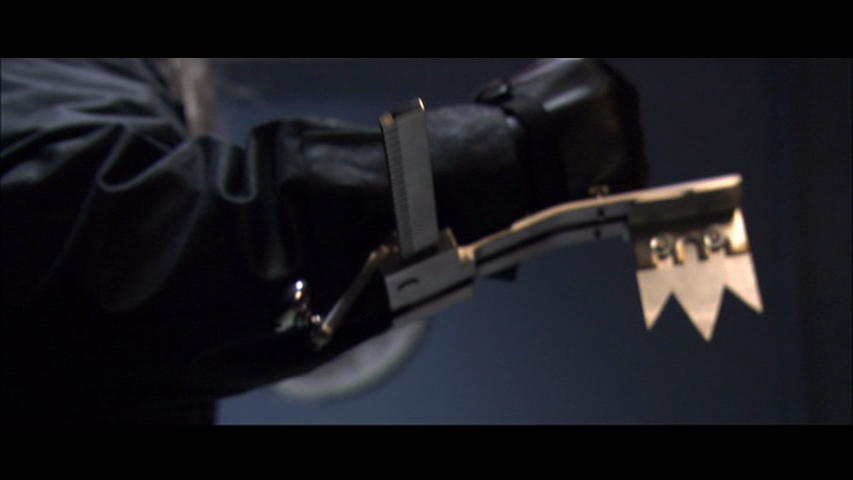 Also of interest, Bettancourt is editing the remake of Poltergeist and has a short film, starring Danielle Savre of BOOGEYMAN 2, entitled KNOCK KNOCK which has a release date of TODAY according to IMDB.  I'm in!  And if for no other reason, this whole rigged up effect is worth a gorehounds time... 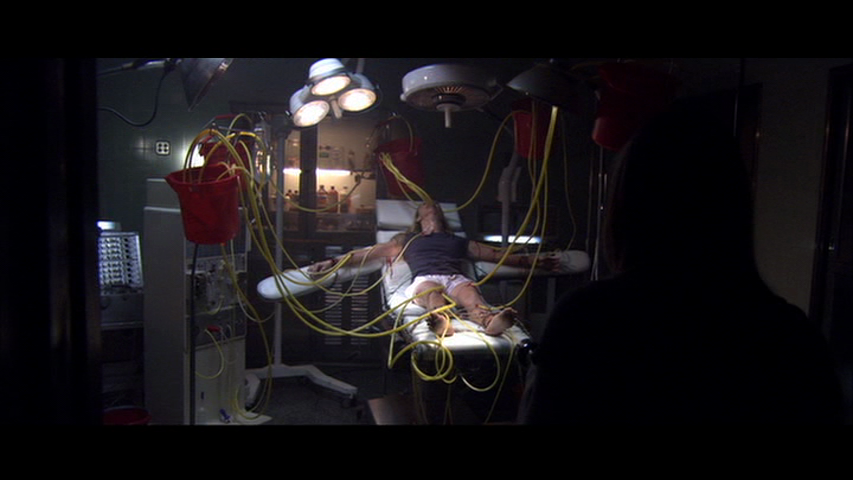 So, I was PUMPED now, BOOGEYMAN 3..what do you have for me?  Well, interestingly it is tied to B2 in that Tobin Bell's characters DAUGHTER apparently finds some notes by her father about a real Boogeyman (uh...OK...they do mention that in the other film a little bit).  Bell even reads a few lines, though I thought it was someone impersonating him.  This time we have a college campus where the girls tend to wear pajama pants and low cut t-shirts all the time and the lads all look the same.  Seems a REAL boogeyman is back right from the get go, and our lead DJ, Sarah, can see him.  But nobody believes her. Even her professor has an issue with this, at one point refusing to believe that The Boogeyman can exist because it can't change it's own legend as it goes along (??) --but we know it does. At one point, Boogeyman appears in a bong. And then chases down a peeper putting a webcam in a ladies shower room (thank you, nudity quotient requirement).  Some of this might have sounded nice on paper, but it's either too silly and handled to straight forward with the editing and score OR it's just to serious for it's own good.  The effects are toned way down from 2, though I have to admit I did enjoy seeing things like industrial dryers put to bad use.  Definitely stuffing a person in and having them explode in a shower of blood will void the warranty. 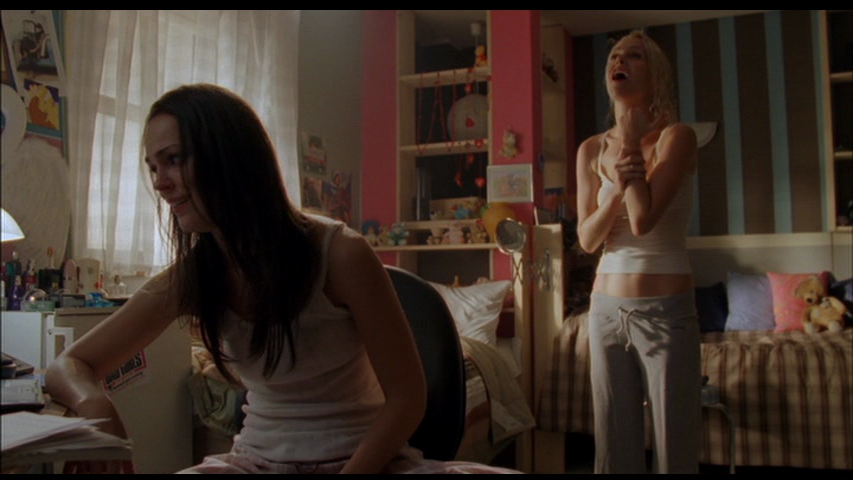 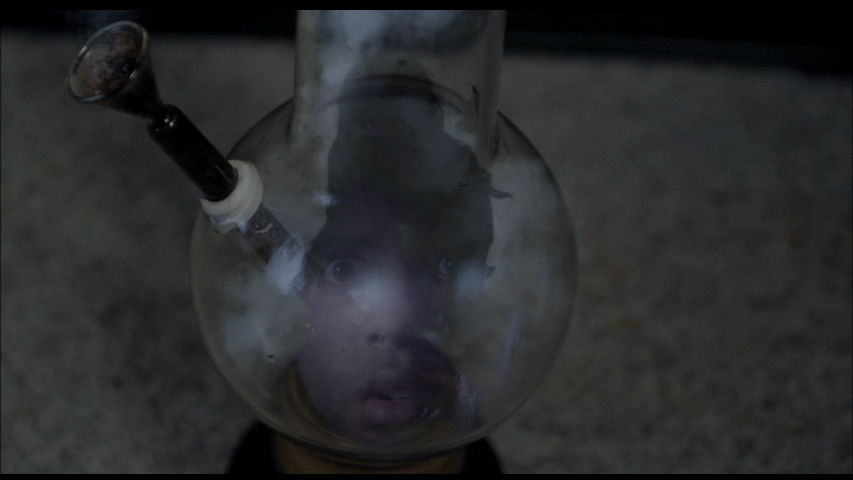 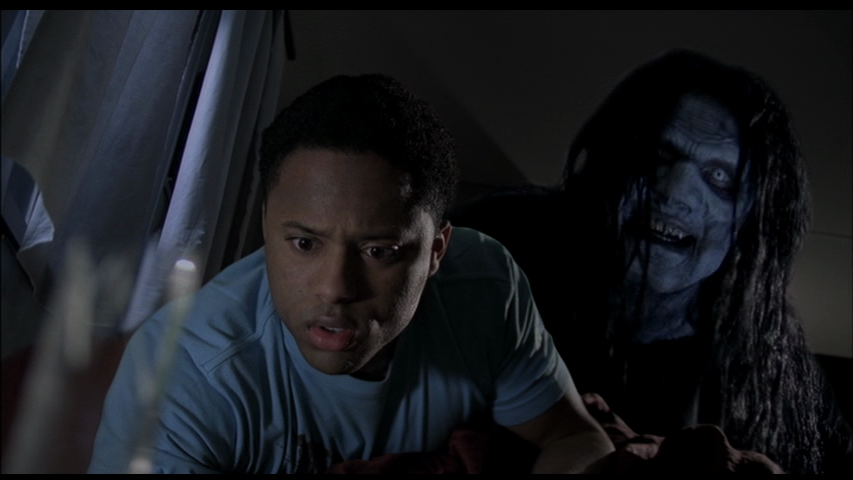 Charles Band definitely wants his EVIL BONG back by the way.
While not terrible, this one is all kind of pointless in the end. It seems to want to jump on the J-Horror trend mixed with Nightmare On Elm Street (hey, the trailer for THE GRUDGE 3 is on here!) but nothing comes together to have any tension.  I did like the scripts attempt to find a way to defeat The Boogeyman, but the 5th left turn and double finale sort of deflates the entire thing!  Ah well...

I got one very entertaining film and two happy horrors from the others..it's OCTOBER and it's time to watch more.  Nothing can be bad when you have the horror momentum behind you!