The saga of the script! BLOODFIST x 4

I've been on a complete bender of 80s and 90s kickboxing and action flicks featuring kickboxers this month!  It has been a truly eye opening experience. The cheapjack thrills of PM Entertainment are new to me! The career of Don "The Dragon" Wilson is a revelation (I watched all of the Bloodfist films in three sittings--yep, that is 8 of them!)!  And most mind bonkingly of all?
I found that there are FOUR films that are basically the same, and I bet if I keep looking I will find more!

Let's start with BLOODFIST.
I'm going to write all these up with full reviews, but in this apparent prototype of exploitation DTV cinema we have an opening fight that has a pitfighter getting hated by the crowd. Drunkenly stumbling, he is killed in an alleyway after the fights.  Someone witnesses it (usually a bum with an eye for bad guy tats) and then the fighters brother comes to town.
Brother helps out a guy in a barfight and ends up with his stripper sister.
We hit lots of strip clubs!
The brother is taken under the wing of a teacher that quotes Sun Tzu and The Art Of War.
Fight fight fight fight fight.
The guy everyone thinks did it says "Your brother died....like a BITCH!"
Twist reveal.
End.

So, here is the Bloodfist Trailer: 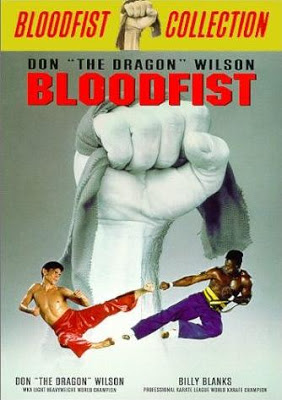 It's a fun flick, Don "The Dragon" Wilson really grows out from this rather simple bit of business to be honest.  In just the Bloodfist series he gets to be a dude on the run from all kinds of peril and kicks ass. This and 2 are the only basic kickboxing flicks.  I could see why Corman and Co. were high on him and ran with the HUGE swell of Fu Frolics using his image.  I think the key to enjoying his movies is to appreciate that he sells for his opponents and doesn't have a massive physique that takes the reality of him kicking ass against the odds away.  He's ripped beyond belief on occasion, but you have to like the dude.

I actually saw Full Impact the night before Bloodfist!  It's a very straight remake.  Jerry Trimble stars in Don's place and does a good job.  I think I enjoy this one a bit more, it's tackier and even a bit sleazier in the strip sequences!  Check out the trailer.  Also, Marcus Aurelius (who would later be in Bloodfist SIX) takes over the teacher role as an urban warrior in place of the more traditional Kwong of the original.  It's a fun twist.  I can't find a trailer for this one, but I'll keep hunting!  If you want a really junky martial arts flick for a few hours, this is the one to go for! 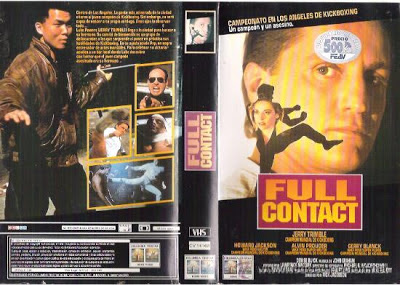 But the fun doesn't stop here...oh no.
I love anything that has Dark Future Cyborg Kickboxers more than almost ANYTHING.  And there are two KICKFIGHTERS OF DYSTOPIA style epics that both use the Bloodfist script.  Bloodfist 2050 (ok, you can figure that would), but an even CLOSER remake exists in Dragon Fire! 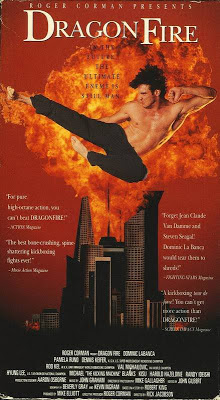 This is a nice and glossy bit of apocalyptic battling that features a bunch of stylized fighters duking it out between visits to the titty bar.  It runs under 75 minutes.  It's freaking great.  Unfortunately, the lead is blanker than Billy Blanks (who ain't blank actually, I like his movies) and shows just how much charisma Don The Dragon has!
Yeah, I shook my head at that too.
To really drive this joke home, Michael Blanks, Billy's brother and all around good screenfighter, plays the evil top fighter!
Scene for scene and dialog to match, this one is super close to Bloodfist!
It even takes "Luke Powers" from Full Contact and swaps him to "Laker Powers" instead.  JEEZ!

But wait!! Bloodfist 2050 utilizes the same plot, some of the same scenes and then throws in a slightly different bit about the big villain twist (barely) and yes...it includes "Your brother died....LIKE A BITCH!" again. AGAIN!!! 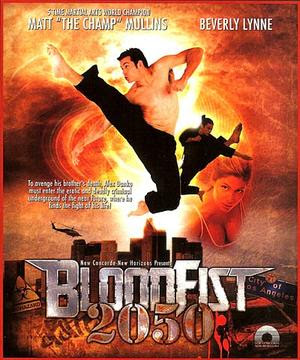 This one is really fun to watch as well, though I think Dragon Fire was better due to all around superior fight scenes.  But what boggled my mind is that original mentor Kwong, Joe Mari Avellana, shows up and pulls the SAME double duty as production designer that he did on BLOODFIST. Oh, and he shows up as a different character in Bloodfist 2!
Holy shit.

You need to see Bloodfist 2050 if you have come this far...and it's enjoyable enough!  Lead actor Matt Mullins has some good screenfighting chops (and flips and kicks) and his scenes are way above the rest of the almost abbreviated PostNuke Kumite shots.  Also, Beverly Lynne is great as the sister/stripper.  I have to cop to really liking her since seeing Emmanuelle Vs. Dracula.  Hot!

Now, there is a lot more to say (and a place and time to say it), but this is one of the most unexpected delights that all of cinema has offered me.
Bloodfist and 3 remakes all watched in a month.  By accident.
I love this hobby.

And the oddest part?  The creator of the television show THE GOOD WIFE is the original author.  I bet he gets some fun little residual checks amongst all that money that is pouring in now!!!

Anyone else seen a remake of Bloodfist I don't know about?

And you know what? Any movie set that features this many strip club scenes HAS to be good, even on the third remake!  Enjoy some random BLOODFIST 2050! 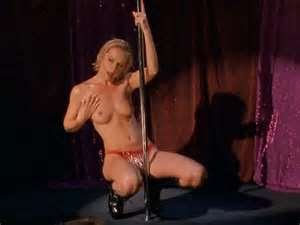 Labels: Bloodfist, The Kumite of 2013