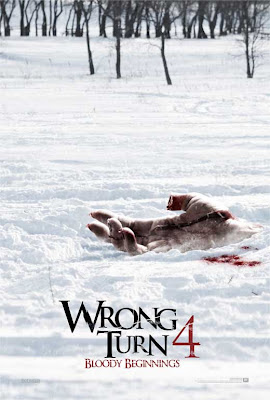 Another WRONG TURN in October for me, but I found it to be just the right row in the snowy trees to keep my inner gore hound happy!


"They're eating him ALIVE...like some FUCKED UP FONDUE!!!"

OK horror sequel subtitle, you promise me the bloody beginning, so what are they??  How does Three Finger get that way??  Well, we find out in a prologue as we enter some kind of mental health facility that is penning up and researching the inbred population of West Virginia's backwoods.  Now, I assume this is the 70s because the new girl is wearing a groovy patterned shirt.  Of course things go sideways pretty quick as Three Finger and his crew escape (oh oh), unleash the freak show to demolish everyone that is inside the facility and ride on into 2003!  Wait...that is it?  Alright, alright.  I have to stop, because the film does something VERY right as it leaps out of the gate. The head doctor gets trapped in a Saw styled barbed wire rack that rips him to shreds in gruesome fashion as the boys look on in glee.  If there was a major knock on WT3 it was the overuse of poor CGI gore. Not so much here, there are some real live rubber limbs getting shredded all over the place.  And...this is why I watch low budget horror, inventive gore and ghouly makeups are always welcome. 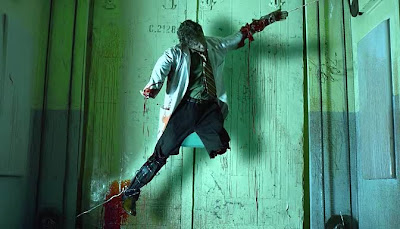 So, jumping ahead to 2003 (the same year as the original film, I guess this is just the winter before Dushku and crew fall victim) we have a crew of attractive folks that are going on a snowmobiling trip. They take a...dun dun dummmmmmmb...WRONG TURN and end up at the Facility of the Fucked Up Freaks!  Now, we could go over the talking and gesturing, but...nah.  We have two sexy girl girl scenes (really, seriously) and a bit more nudity.  Cheers for that!  And while the pace sags a bit in the middle (cue the nudity) once the Hillbilly Horrorizers arise this film gets CRAZY violent.  I could be wrong, but I saw what looked like visual checks to Suspiria (a barbed wire hanging that pops two iconic bits together) and a big drill bit that buzzes pretty similar to Stagefright.
The girls actually get the better of everything here as the gents end up tenderized, flayed and in one poor guys case, fondue'd!  That bit is really strong and manages to not just stand as rubber getting chopped up, but some good tension building as the cast tries to figure out whether to run or fight.  And when the girls do fight, it is pretty fun to watch.  Just don't go stabbing the guy in the F13 part 2 sack so quick ladies!
It ends on a final final girl note that caught me by surprise and made me pleased with my 90 minutes of DTDVD horror! 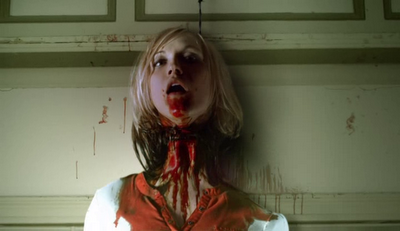 Wrong Turn 4 feels like a bit of a step back in scope and style, because both 2 and 3 tried to add elements in to spice up Cannibals versus Campers.  This plays it much straighter and keeps the gore and nastiness more grueling to stay firmly in the horror genre, eating the tongue out of the past two films cheek.  It doesn't really feel much like the original either thanks to the switch in scenario. Wrong Turn 4: Bloody Beginnings is probably the most "horror flick" of the batch, but by putting a mixture of vigorous gore scenes, naughty nudity and cannibals on snowmobiles together, I'm all for it.  When you are given the task to make a cheap and fast part FOUR of a series and script in a scene where the cannibals tie down their meal while alive and roll out a cart full of sharp knives, potatoes and onions...you are cooking it up right.

The leads are all morons and they take the hillbillies out of the woods! Easily the worst of the series.

I'd argue that the leads in 3 are much much much less appealing and way more piss awful CGI, but that is just splitting Direct To Video hairs.