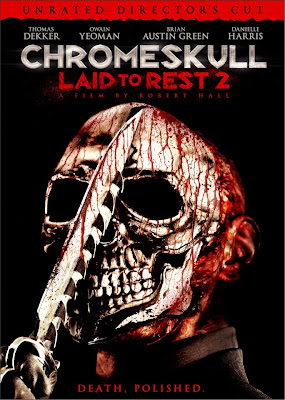 I really enjoyed Robert Hall's film LAID TO REST. It had gore. It had a stylish looking killer. It had a minimalistic plot.  Good music.
LOTS of films have the above elements, but very few put them together as well as the first Chromeskull outing however.  I don't like Laid To Rest actually. I love it.  This was a movie that didn't skimp on style and action and instead of feeling like a slapped together gorefest that just didn't bother with a script, there was a genuine attempt at atmosphere that reminded me of seeing Phantasm for the first time.  It shouldn't hold together, but for me the original film creates an atmosphere that is all to easy to miss in most modern low budget horror films. Real uncertainty is king and you never can tell what is going to happen because you aren't sure what is happening in the original.  Can the sequel follow in the same sharp black suit and shiny death's head fashion?
Yes! 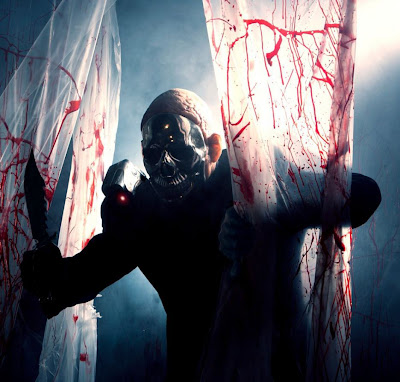 Picking up where the first film left off, the girl that fucked up Chromeface the first time is being left behind by the other survivor.  Already we aren't certain as to where this will all go, and in hi-tech Friday the 13th Part 2 tradition it doesn't take long for the film to go on a completely different, new and unpredictable direction.  Chromeskull is not what he seemed, as he gets treatment and protection as he is mended up by surgeons from his failure in the previous film.  But who could he be?  All we do know is that there is a power struggle in Chromeskull Kickass Inc. as his nasty UltraSlaughterer wannabee assistant Preston tries to assume the mantle of Chromeskull, tying up loose ends that include a police investigation into the death of The Girl.  But wait, another accomplice to Chromeskull is jockeying for position too. She wants Preston out, Preston wants in so much so he wants to rule the roost and Chromeskull is pissed.  Seriously pissed.  I do not want to be on the  edge of his wrath.  Oh, and of course, Chromeskull wants to play as his assistants set up a "new playspace" for him.
Lost?  Yeah, that is why it works.  I can understand some viewers distress. We know nothing of who Chromeskull is, we don't know how he has a shadow network that seems to extend into the FBI or really anything else.  I say good on you Robert Hall.  Because again, somehow, Laid To Rest has left me wondering how the movie is flying by so quickly and never feeling bogged down by nonsensical cliches that get repeated from earlier films and take me out of the action.  It wouldn't work for every film, but given the success of the original, this one doesn't disappoint.    And if you think you are full of questions now, be sure to stick all the way through the credits.
And bonus points for Chromeskull trodding on Godzilla's star. I loved that. 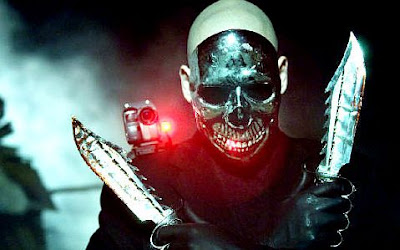 I can't put my finger exactly on what I loved about the Laid To Rest films, but I can tell you that they are technically VERY well made.  The photography is super sharp and the design of Chromeskull and his weapons are as iconic as anything I can think of, right up with Jason and the machete, Freddy and the glove or even Leatherface and his 'saw.  The acting, especially in Chromeskull, is shockingly solid. Brian Austin Green, who also has a producing credit, lets it all hang out as Preston and I kept looking at him and trying to picture him in any role I would have seen him play before.  Nope. This is a spot on maniacal bit of work.  Everyone I know that has seen this seemed really put off by one character decision late in the film by the character, but for me it completely captures the appeal of this film.  Not to spoil the end, if you wonder why there is a tattoo artist in Chromeskull's lair then I think you are missing the point. Of course there is! This isn't "oh baby don't go back in the house" territory, this is "what a bizarre world we are in" storytelling.  I loved that.
And the gore!  Amazing effects that accentuate make-up and physical effects combined with very smart use of CGI that never feels crappy and forced.  Alright, dear Friday The 13th rights holders. Be sure to get Almost Human Inc. on board for a sequel and reshoot EVERY famous deleted gore sequence and jam them into one film. Now.  My jaw dropped not only at the level of violence in each death scene, but that they are all pulled off without a hitch.  Awesome, I don't want to spoil even one.  See this flick. Enjoy it. Or don't. But I bet you won't forget it. 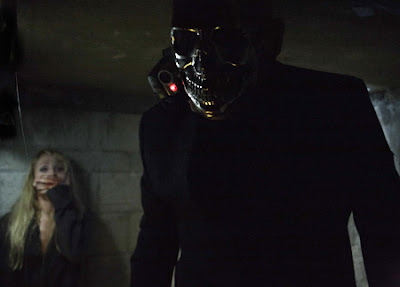