Halloween Horrors returns!  Every year I keep track of what I'm watching and am amazed that I watch as little straight Horror as I think I do.  So, October is the month to dedicate myself to the genre that spooked me as a kid and chills me as an adult!  Let's get crackin' skulls! 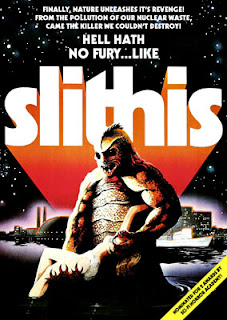 Slithis is one of the films that makes me think of the kids book Paulie Pastrami.  Young Paulie achieves "world peace" by giving cupcakes out to everyone he meets. I think I'd do this with monster movies-and Slithis, while not a particularly stunning achievement, it is a perfect bit of man in a suit going GWARRRRRRRGH and terrorizing a small community that just might heal any emotional wounds you may have.
Just say it...SPAWN OF THE SLITHIS.  Feels good.  Do it for 50 minutes and then send me 90 bucks. 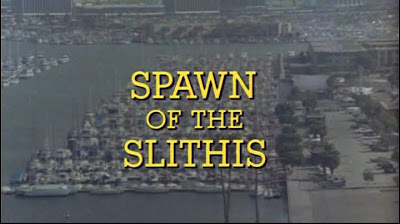 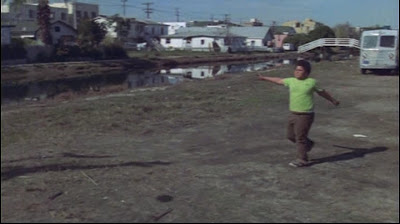 How many monster movies have a turtle wearing an umbrella?  ONE.
SLITHIS!!!! 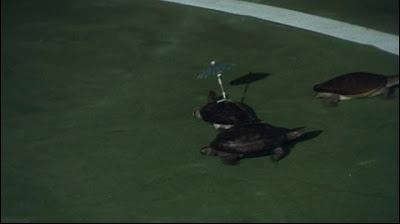 The best thing about Slithis is that it defines the term "ease of use" in the script department.  Kids stumble over a mutilated dog corpse. They run and an investigation begins.  A schoolteacher that was a journalist and really seems to dislike kids decides to get involved.  Super science explanations involve the word Slithis.
SLITHIS!
People are attacked by an AWESOME rubber monster!!  Some detective work ensues. 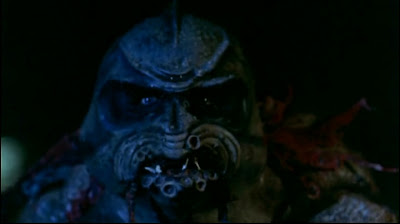 SLITHIS!!  Look at that dude!!  SLITHIS!!!
I just like typing Slithis. Sorry.
I'm going to add it to my dictionary so that spellcheck realizes the might of SLITHIS!
Anyway, there is an awesome subplot about the homeless population (of about 4) in this little town.  Not only do they have a social system that must be investigated and information comes in the currency of 5 dollar wine, but they provide fodder for...you know who.
SLITHIS!!!
The filmmakers nailed "gnarly homeless platoon" in true Street Trash manner by the way. 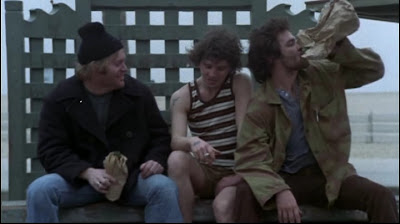 A little more explanation and while our heroes hunt for SLITHIS the monster decides to change his name and go from SLITHIS to SLITHGONNAGETSOMEASS! 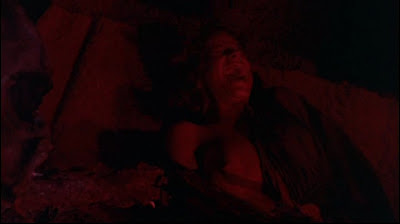 Monster suit. Car Attack. Super Science. Boob.  This movie will heal the hole in your soul.
SLITHIS!
There is a big conclusion that has the mega monster getting messed with anchors and belly showing man flying kung fu (sorta).  It is awesome fun...I can't really be critical of camera angles or anything like that. You could show SLITHIS eating cereal and farting while watching cartoons and it would still be great.  See? 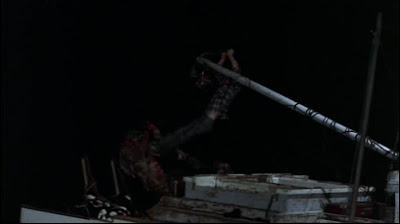 Well, it is sort of hard to see actually.  But so it goes.
Slithis is a straight up monster flick from the 70s that will either bore or delight the viewer, depending on their outlook, sense of nostalgia or love of rubbery man beasts.  I love all this and had actually never seen the film before this viewing.  I enjoyed it a lot more than the MegaBeast monsters of recent memory, because the kids look like pictures from my youth and the whole thing has a vibe that doesn't just evoke Creature Double Feature monster movies, but also the time when I watched them.  Stripey shirts, big collars and I think my childhood may have been in that frisbee slow motion at times.
If you love minor monster movies, you really should try SLITHIS! 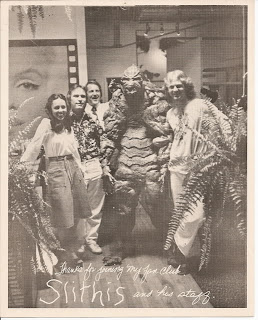 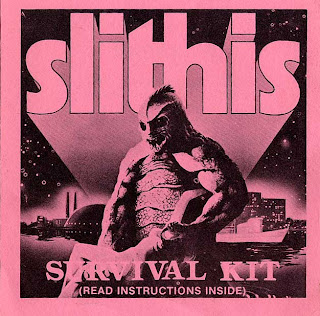 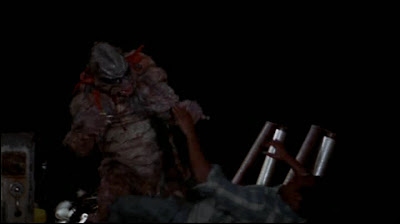 My Slithis Survival Kit was yellow.

Things noticed. We never meet the guy who told our hero about the boat for rent, nor his rival teacher at the high school. I always wondered if these characters were cut from the film, or simply never existed beyond the names we hear? The costume is quite good, but even better is the suit actor who gives a ferocious performance as the creature. Love the odd performances of the slithis scientist and the police inspector.