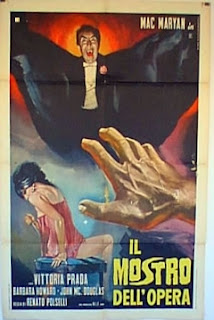 I really enjoy the cinema of Renato Polselli, and finally got to watch a subtitled-if not a touch battered-version of Il mostro dell' opera.
This movie is amazing. It is as strange, barbaric, twisted and sex drenched (given the limits of the time) as any of his other films that I've encountered.
But you know me a bit dear reader, and you know I'm always looking for the little stuff.  So, check out this "fade to black on a woman's crotch" that may not feature EuroBoosh like the Maestro Franco would do, but is this a scoop on the technique?  Enquiring TRASH FANS want to know!
Crotch To Black-1964 style!
I don't recall this masterful technique in pre-64 Franco!  That said, Franco really created the genre of Zoomin in the Labios Rojos for sure-but I must admit to being stunned by Il mostro....

That looked more like a waist shot than any bush shot from Franco, so I will have to defer to The Maestro, Franco. Sorry.

On the one hand, I agree with Douglas here, it's not Franco style.

On the other hand, given the content of later Polselli films, you sort of know that's exactly what the old perv was thinking.

I say it is a strong precursor of The Pussy Zoom, if only because you know Polselli would have done it if he could.