Well...it finally happened! After working at Sight and Sound and Playback Trading way back when we could import a trainload of Cyberhome all region players and sell them all day and night I found myself looking for a new all region DVD player.  My LG Blu Ray player was a go to-it played PAL discs without a hitch as well as DVDr with ease. And then...BLECH! Dead.
So, I popped on my Phillips All Region player to watch the recently released AWE disc of Ironmaster. Full of VOOD I watched in horror as the tray began to randomly open and close as I tried to snatch the disc out in the gentlest fashion possible.  ARGHHHHH!! 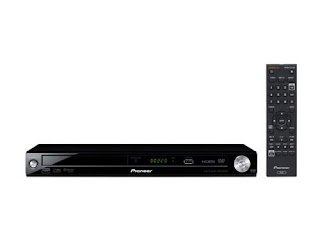 With about a half hour of research and thanks to some friends at Eurotrash Paradise I was pointed to the Pioneer DV220KV-K.  Make sure you check to get the extra K at the start, because this Region 3 marked player, with attached at purchase voltage regulator, does the job. I'm actually AMAZED at what 65 dollars nets you, back when a truly crap All Code hacked (by remote usually) player would cost triple that!
Keep in mind this isn't an A/V review exactly, I'm a middle range user at best.  I could immediately spot the difference, and improvement, in upscaling via HDMI that this player provides over the LG Blu-Ray or Phillips, but that is about it.  However, it is worth confirming what I've found for interested buyers.
I've tried to test every aspect that would be of interest to Tomb residents and didn't find anything lacking for the price.
Out of the box the only adjustment I needed to make was to change the default screen setting to 16:9 over 4:3. That was a bit surprising, but easy enough to swap without consulting any manuals.  You also need to prompt the machine to upscale the image and it confirms that you have the proper cables to do so.  Again, easy, but if you don't look for it, it doesn't happen by itself.
PAL / NTSC playback is fine, and region codes don't require any unlocking on the user side either.  Simple. Plug, play...and VOOD safely spun up and thrilled me again. Thanks Umberto Lenzi. Thanks AWE. Thanks 65 dollar player!!
But the fun doesn't stop there...I tested burned DVDr and DVDrw discs with AVI and MP3 content, both of which played fine. The interface is a little odd in that it doesn't activate right away. I pressed play and was brought to the first item on the disc, and after a little bit of button pressing found that you could get to the standard GUI from the top menu button.  Select what you want from the list and away you go. There is a jpeg mode as well.  I can't say I've ever used that function on a DVD player, but it is there.
Karaoke?  Well, I didn't test that out, but there are controls on the front panel if you need them.
Finally, and interestingly to me, there is a USB port on the front of the unit.  I used a little 1 Gig stick and popped a standard AVI on there. You plug it in and use the remote to select USB over DVD and it has the same interface (which turns on by default) and the film streamed off the stick.  I'm going to use a larger stick for a higher resolution file as a test in the near future, but everything worked fine.  That is kind of a fun feature since I can share files, even a double feature with trailer reel, with friends on a stick. That is cheap to mail and easy to transfer between devices.
Oh, and the player is really small. It makes my Xbox 360 look like John Holmes penis in the "who's biggest and baddest" world of my entertainment center!
Posted by David A. Zuzelo at Wednesday, May 18, 2011

Congrats with new player, David! (and with the AWE Lenzi disc!!!). I love Pioneer! I bought a cheap one 5-6 years ago and altho I've hardly had it turned off since I pulled it out of the box (I'm exaggerating here. Slightly.) it still works like a charm! And it plays all regions and formats, dvd, vcd, svcd, dvdr, cdr, I'm sure if I slammed a Betamax in there it would play fine too.

Btw, I've begun to look for a new dvd recorder and was shocked to learn that they don't make them at Pioneer anymore!! O_O The old ones are even hard to find now (at least this side of the pond). Argh!

This is a weird coinky dink. I as well had the Philips and it did that open and shut thing with the tray, often catching discs in bad ways.

And recently, I got a regionless Pioneer as well, though not sure if it is the same model. Either way, its been a good machine. Doesn't play as many formats as the Philips though.

Tested it on DIVX or XVID? Can it do the variable processing necessary to prevent the sound distortion on the XVID's? I'm in the market for a new player (really need a blu ray player though).

Hellbilly, that is bizarre!! Well, I guess we know that in a world where a rubber tire can have a horror film, a Phillips chomp and devour flick can't be far behind.
Jimmy, tried .avi and had no issues. That is pretty much the only format I see these days and I was really shocked by the quality playback.
I do need to look at a larger stick though, I want to see how a 1.5 G AVI would look.