Pugilistic And Ballistic : Books That Blow Your Face Off #4

Today we have a selection of Motorbikes and Hutsploitation as we first go right up to the May 2010 Mack Bolan offering and then enlist in Cody's Army and unleash a flag waving good time! 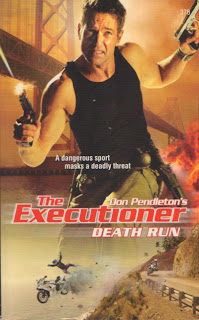 "The bullets entered his face, leaving marks that looked like an angry case of chicken pox, and exited through holes that weren't much larger than the entrance holes.  But they did their intended job, scrambling the man's reptilian brain stem on their way through."
After realizing that I had not read a Mack Bolan book that was written more than 20 years ago I trundled down to the only place I know that carries the Gold Eagle line at a discount (The New England Mobile Book Fair) and grabbed up The Executioner #378-Death Run and gave it a read.  Not bad really, though I noticed that the story plays a lot like the show 24. Mack Bolan. Jack Bauer. Jack. Mack. Bolan. Bauer. Hmm....
Terrorists decide to blow up Los Angeles and we call CTU (no no, sorry) Stony Man in to action!  The unique and fun setting this time is a set up mixing Malaysians, Al Qaeda and a Phillipino Gang setting a MotoGP team to smuggle in Plutonium to blow up the city in order to get at some diplomats...and the rest of the city as collateral damage!  We spend as much time with the various factions as we do Mack Bolan in this novel. But nobody slays 'em like Bolan, even in the year 2010.  Mack has a cellphone, a GPS and tons of high performance bikes to zip around on during lengthy high speed ballistics n' rubber burning chase sequences.
The villains are eeevil, this time we have a sadistic torturer reducing humans to lumps of flesh AND a meth dealer with a dog name McVeigh! Mack strikes down the bad guys in gory fashion, yet still manages to keep the human element that I enjoy as he takes at least one Spaghetti Western styled beatdown and mess up a few bits of his operation.  All in all, Death Run was a fun way to watch a stripped down season of your favorite action TV show in two sittings, yet still manages to retain the fun and flavor of Mack Bolan.
In 2010 Bolan is a little more refined and tech support oriented, but fun nonetheless.  Sometimes the fun in an adventure novel is to get immersed in a different world, and I never expected to have an equal amount of motorcycle and car porn in my gun porn!!  But...it works, mostly because author Darwin Holmstrom brings his expertise in motorcycles to the table and makes it easy for a novice to understand and still meet the physics bending reality of high speed chases without going in to all out science fiction.  I'm sure that he was working on Let's Ride at the same time he was researching all of this material.
While the lead villains have moved to the terrorist cells of Al Qeada, Bolan remains Bolan and bodies and machines go BOOM while we are treated to a loving run down of all of the weapons the soldier uses in his never ending war.  The only knock I can really give against this, and it has little to do with the content of the book, is that I prefer the more dated adventures for the ambiance of the dated dialogue and attitudes.  Perhaps this is what brings me to the novels of the 70s and 80s so much, not only are they insane fantasy action stories, but they take me to a favorite time in exploitation film.  This is slick and technologically advanced fiction.  A great read, but I think I'm still more intrigued by Mack vs. The Mafia! 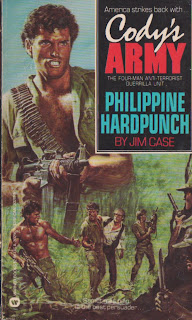 "It is a climate made for violence.
If that came their way, the men of Cody's Army were prepared."
Rah Rah Sis BOOOOOOOOOM Bah(m)!  Cody's Army is here!  Well, you can't even imagine how excited one of the authors of the book on Italian Action Films was when he saw that cover and that title.  Fred Williamson once wailed "I ain't going to no GottDamm Phillipines!" as The Black Cobra, but I've seen so many waterfalls and huts explode I just love that area of the world for some action.  And while it has many faults, Cody's Army delivers on action in big doses.
Cody and his crack outfit are sent in to rescue an American family from the evil Col. Locsin and his "Flip" cronies, and the first 70 pages of the story are basically one huge infiltrate, rescue, destroy mission that sets up a subplot of a rebellious teenage daughter that goes native for a brief time so that Cody's Army has someone to protect for the remaining 130 pages.  Turns out, she also rats out her dad, who is working as an engineer, as an ex-CIA operative.   So, everyone wants him...but it all unravels as we meet up with at least 4 different groups attempting to pull of Operation Thunderstrike.  You have mean Malaysians, angry Philippino toughs, government officials and more.  But have no fear.  Cody is backed up by the President of the United States to just smash everyone in to tiny little bad guy bitlets.  And they do.
While the plot is generic and the pace slows down to a crawl after the opening salvo, I found myself enjoying this book more for the authors attention to describing what is going on with the Philippines after the Marcos regime was forced from power than I was the 2 Star Generals damning Cody for being recklessness while asking God to love him for his heroism.  Action wise...it is fine, I liked the final assault sequence and helicopter battles quite a bit, but nothing goes as over the top as something like Killsquad, which left me feeling a little dry.
I mentioned enjoying the period atmosphere in the Bolan review above, and it is true...Cody's Army would have made an excellent Cannon film, it has enough action as to not break the bank for a film company and the pace is almost exactly the same.  But this is a book and there is no budget to worry about.  I honestly never really looked at why all those 80s Philippino action films had so many insurgents, counter insurgents and corrupt government officials.  After a little checking, it seems that the author of this one had his facts straight. I may not have loved the book, but it did give me a nice way to appreciate all the action films I love.  Not that Strike Commando really needed a lot of clarifying-yet to use that old dubbing chestnut..But Still....
Non-Essential reading, but I will always love the title of this one...PHILIPPINE HARDPUNCH rocks!
Posted by David A. Zuzelo at Thursday, June 10, 2010

This is a problem with so many of today´s thriller or pulpfiction. They are slickly and competent written, but they also have no soul. All the elements are there, but they feel empty, just going through the expectet motions. Todays writers are just too self-aware.