Pugilistic and Ballistic - Books That Blow Your Face Off #2 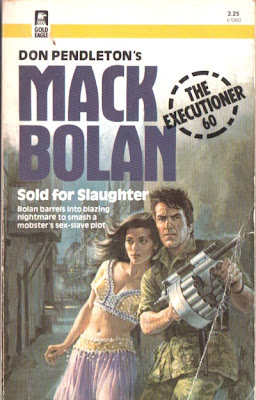 Bolan huddled underneath the rain of flesh and shrapnel, battered by the heavy-metal thunder of the blast.
Bolan finds himself on a rescue mission in a slave pit where a one time ally, Smiley Dublin the sexy Sensitive Ops Agent, has found herself imprisoned.  Luckily, Mack uses one of his mob Ace pseudonyms to pull off a rescue and demolish operation on her behalf. But it just leads to another case in the files of The Executioner as the seeds of the slavers evil are in need of being burnt out of existence, and Bolan will do just that. Following the stench of sold human skin all the way to Algiers (a place that seems to have bad connotations for Bolan as we are given an Executioner history lesson)-and straight in to the heart of human hate.  Toss in the fact that Smiley can't stay out of trouble and ends up right back in the hands of the grubby flesh merchants and beneath the torture instruments of the sadistic Countess-it is double time for the grisly gun muzzles of Mack the Mangler.  Parabellum punishment ahead!
I love Mack Bolan books. Good ones, bad ones, barely plotted ones, over plotted ones....they are always a fast and furious read.  This one is from 1983, which would put me right at 15 years old and about the right age for when I was most in to the Gold Eagle line.  While the sleaze is really off page for the most part, it is the unrelenting glee which Mack Bolan turns the bad guys in to human mulch that puts him in a class by himself when everything is working right.  Mike Newton knows how to keep plot straight forward, gun porn practically bludgeoning and manages to find intriguing ways for Bolan to bring the pain on a page to page basis.
And he writes the phrase Parabellum Manglers a whole lot.  I'd love to use that as a band name.
Sold For Slaughter may be run of the grist mill in everything but the action scenes-but if you are there for anything but enjoying the Jason X of ballistic mayhem do his thing then you will probably never encounter this book.  Start it at breakfast, enjoy your day, finish at bedtime...I had a blast.  I'm still enjoying reading the cover blurb, is it me or would a letter "a" make this much smoother?  Also note, the cover image is actually a FANTASY of the female agent. Woah!
I think there are more badguys mulched in the first 100 pages of this book than the entire run of Black Samurai. 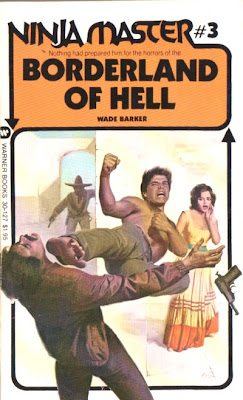 Brett picked up a fork from the table in front of the man who'd lit the match and thrust it in to the man's heart. The stunned, overweight Mexican gasped and fell forward into a plate of half eaten refried beans and chicken bones.
Ah the Ninja Master series (see review of #1 here)..."Wade Barker" is always welcome in my paperback perusal.  This entry see Brett Wallace now as a full blown Ninja for hire if justice is on your side character...and a missing TWA hostess becomes the target of his investigation.  She gets in to more than a little trouble on a Mexican layover, and instead of a little boozing and shopping, she ends up in a flesh market, stripped, shaved and available for test drives by anyone interested in purchasing her from the malefic General Estrada.  Lucky for this stewardess, she is Japanese and her boyfriend has access to the United Ninja Help Line!   Brett has his regular farewell sex scene and pulls his pal Jeff Archer along for a mayhem filled ride of sleaze and smashing just over the border.
Reviewing number 1 I was surprised how low on the nastyometer it was, but not so here.  THIS is what I remember the series being like.  Besides the upped and more hardcore sex, the violence is all of the flesh shredding and pummeling variety-and the General gets up to things like sponsoring vicious cat fights and lesbian sex shows.  The hapless stewardess, Meiko, does get to bust some battle moves, but also finds that her first lesbian experience, performed under duress, gives her "explosive" orgasms-surely something her boyfriend at home will benefit from.  Also look for a near Cannibal Holocaust styled torture sequence near the books end that will leave a dent on readers.  That makes the books kick off castration look gentle.  Overall, a very nasty dip in to the deep end of American Ninja Exploitation Novels of the 80s.
Since my last post I was informed by Ballistic Book Bearer John Grace that Ric Meyers is not "the" Wade Barker but "a" Wade Barker.  It makes sense as later books would be much more ninjariffic and martial arts oriented. These early volumes are only as exotic as shuriken belt buckles and the occasional lapse into Kung-Fu styled flashbacks, but I don't care. I dig 'em.
Now, who exactly is this Wade Barker...I must know!
Posted by David A. Zuzelo at Wednesday, May 26, 2010

Yes! I still buy and read this stuff! Never saw the ninja master series though, definitely gonna keep my eyes peeled for those. Used to read some of "The last Ranger" series, good post-apocalyptic shit, and just grabbed #6, didn't know they went that far. Ever read the "EDGE" western series? Good fast paced violent stuff there too!

Me as well, I'm not familiar with The Last Ranger, but there are tons of good Post Apocalyptic ones (I have to finish Survival 2000 up!).

Edge rules, tons of fun. If you get one Ninja Master be sure to grab the utterly vile THE SKIN SWINDLE-because, well, it is a great sleazy ninja tale.

Still can't believe that no one has made a Mack Bolan movie yet.

I actually appreciate Gold Eagle's position on this, it seems like they want to protect the property / properly get paid for the amount of history that goes in to it. It is easier to let people wonder about a movie than to get them to forgive a bad one.
Heck, I thought Punisher War Zone was awesome and that one got a lot of poor write ups!

Mack bolan is badass. As a kid I read his War against the Mafia stuff. Somehow the Stony Man books never rose to that level. I remember a lot of explicit sex in those early books- but the later stuff was more sanitized.

FUKITOR i need some new comics! Get to work!