Pugilistic And Ballistic : Books That Blow Your Face Off #1 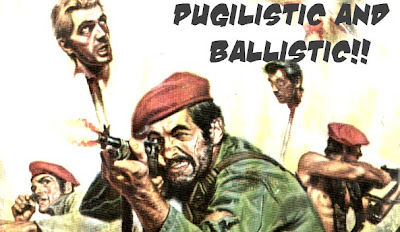 For me the term MEN'S ADVENTURE is not really a pulp era term...I grew up as a comic book kid, but my local shop was stacked to the gills with action paperbacks that ranged from Black Samurai dudes chopping and Bolan and his Able Team smashing to Ninjas hacking and trashing with a blissful quickness that still thrills me.  I can't believe it has been almost 4 years since I covered any of these great 70s and 80s Neo-Pulps on this blog!  Has it been that long since I enjoyed a PENETRATOR novel??  Well, not any more...  I found my way back to these a while back with a little inspiration from unpacking some books from my last move combined with my frequent trips to Bookgasm and the Bullets, Broads, Blackmail & Bombs column by Bruce Grossman (who happens to live nearby and can build a mean kids rocket as well as drop Able Team bombs!  So...lets get to it!

In this post on the HYBRID MAN strip I mentioned how much that story stuck in my mind.  While I was happy to read about almost any character that had a name that threatened violence upon the reader as a young man-and still do-one of the fondest memories of becoming a sleaze and trash novel fan I can name is the "Wade Barker" penned NINJA MASTER series.  These books are pretty much like taking the movie American Ninja and letting Andrea Bianchi pen scripts around the concept. And yes, as a younger man I must admit to hoping to pick up Wade Barker's sword after he finished the Ninja Master books for my own adventure with Brett Wallace and his rather peculiar brand of justice.
Time to revisit the Ninja Master with episode 1...VENGEANCE IS HIS! 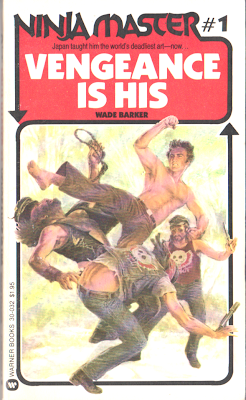 "Brett stepped in front of them and, screaming as he did so, punched the pencil once through Teddy's heart and, pulling the bloody instrument quickly out of one wound plunged it in to Bobby's heart.  Both men fell in their tracks and blood began pumping out of their chests like pulsating geysers."

When we first meet Brett Wallace he is actually a happy fella named Brett Ashford-he makes his rich parents proud by returning from Japan with a beautiful wife and a pregnancy to announce to all his socialite friends. He has studied martial arts and had a chance meeting with a ninja, but turned away from that path in order to enjoy a quiet life of family and love...
And then some thugs break in at random and rape and murder his pregnant wife and dismember his family.
Oh, it is on...NINJA STYLE bitches!! NINJA STYLE!!
After the justice system fails him, Brett must take his own vengeance, killing the gang that was just out for some fun and got carried away while robbing his family. With his bare hands.  This confuses his sense of martial morality, but there is a solution--one that will benefit us all!
Brett is left with no choice but to return to Japan, become a ninja over a 9 year period (which the book just skips sadly) and heads to San Francisco to set up shop as a NINJA VIGILANTE OF DESTINY!
Not only that, but he manages to score a beautiful woman thanks to some ninja connections, open a restaurant and save a small neighborhood from certain destruction at the hands of a villainous gang.  By the time it is over...as in right at the final sentence, the team is formed as Brett, the sexy Rhea the restuarantuer / no strings attached sex scene and the awesomely named Jeff Archer are a team out to right some wrongs.

Now, I remembered these novels as the pinnacle of Ninja Trash Cinematic Pulp-and I was surprised at how tame this book is, but it sure doesn't take long to get rolling, because I belted down the first quarter of #3 this afternoon and it did not disappoint. This book really doesn't either-it is fun to watch things fall in line to create the Ninja Master.  Really, this is Death Wish 3 with shurikens more than anything-and while it may sound like I wanted more than what I got, read the first part of the sentence again.  DEATH WISH 3 WITH SHURIKENS!  I may have been left wanting more, but there is much more, and much trashier fun, ahead!
Some time ago I sent my Trashy Paperback guru, Curt of THE GROOVY AGE OF HORROR a copy of THE SKIN SWINDLE and it managed to even surprise him, so getting back in to these is going to be fun for me.
There is a series of these books I've never even read, which is really exciting...I need to locate them all (and fill in my gap of #2-Mountain of Fear and #7 The Skin Swindle) and get cracking some thug skulls.  Looking at the first volume I'd have to say that Meyers didn't really write these well, but he has a great sense of pacing and junky details that I can't help but devour. One day I really must pick up the sword of Wade Barker and put together a Trashy Ninjitsu Opera  in honor of these books.

Wade Barker forever...I'm going in and I'm not coming out until every stereotypical bad guy gets a shuriken shoved up his ass...BRETT WALLACE STYLE!!
Posted by David A. Zuzelo at Thursday, May 13, 2010

You are more then welcome for any more Ninja Masters that I come across. But the two places I found the ones I had are no long gones. So it might be harder then usual. Now onto some feel good fun reading.

Thank ya sir...I'm curious to read more of the final series (Year of the Ninja Master I think it is called) and want to check out Meyers' take on Dirty Harry sometime.
I'm plowing through #3 and the sleaze level is amped WAY up-just like I remember 'em.

I've got some Toth Zorro on hand to rinse off my eyeballs with...