Anatomy of a BRONX CRACKDOWN! 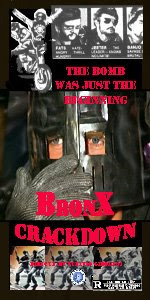 While answering some questions regarding the Tough To Kill book (which you can buy HERE says the shilling co-author) I was amazed that not one, but two seperate people both knew of someone claiming to have this film. They don't...it is not real. There is a small section debunking this lost Post Nuke Classic and where it came from which you can check out-as well as Paul's original review/April Fools Day work of art. Digging around my old hard discs I found the original "poster" that was nice and small and difficult to decipher and thought I would share. I have not found the original .tif version, but there is some funny stuff in that. The main picture is Micheal Sopkiw from 2019:After The Fall Of New York-and I'm still convinced Andreas Schnaas saw this image and took it for the Violent Shit trilogy. I have NO clue what the bottom image is, or even the tag line I came up with. The R rating as well as the stuff from the top is from a poster for The Losers I believe. Best of all...yep, that is a EUROCINE logo!

Ah...Bronx Crackdown-we hardly knew you! Just don't go trading stuff for it...
Posted by David A. Zuzelo at Thursday, March 20, 2008

The bottom imagery from the 'Bronx Crackdown' Poster Art ! comes from the 1988 Tonino Ricci movie Raiders Of The Magic Ivory - starring Jim Mitchum in great form & Reviewed in the Tough To Kill Book ... Natch ;) . Paul

Thank ya sir! GOOD eye, I kept squinting at it.