Guns Of The Patriots - THE LAST MATCH!

As a New Englander (and a football fan) I had already planned out my remake of the Fabrizio De Angelis (aka Larry Ludman) neo-classic THE LAST MATCH. Tom Brady as the hotshot asskicker out to bring back Bill Belichick's magic notebook/mini-cam stolen by a gang of midget Tight Ends from the Philippines! Junior Seau surfboarding out of "unretirement" to lay waste to a defensive line. 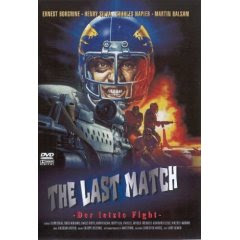 All...gone.WAAHHH!
But let us celebrate the original film! The Last Match is an insane action film that features real Football players (some 72 Dolphins by the way) hooking up with Ernest Borgnine to defeat Henry Silva. No kidding. And if you like this review, don't forget to check out TOUGH TO KILL-THE EUROACTION MOVIE DEPOT for all the Italian guns blazing anyone could ever want. Well, it is growing... This week is a classic Bruno Mattei festival! 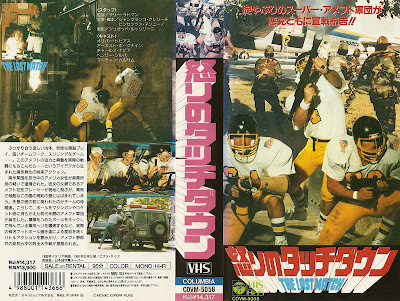 “Tomorrow we start to play the most important game of our lives!”

In a genre that thrives on the absurd The Last Match may be the most absurd film to lumber forth from the Italian action boom. Only the mind of “Larry Ludman” could spawn so idiotic a premise, going on to create a lasting masterwork of cult action nonsense. Footballs, grenades, helicopters, strip searches and barking Borgnines combine for a Super Bowl of silly fun that will leave you satisfied.

After an opening football game we meet Cliff (Oliver Tobias) as he talks to his daughter, who is on vacation in what is only referred to as “that country.” Why Suzi (Melissa Palmisano) would choose to vacation with her boyfriend in what appears to be a Caribbean slum is beyond me, but why bother asking that question? When she tries to leave the country, a guy in huge sunglasses slips drugs into her bag, and she is arrested. Her boyfriend George calls in Cliff, who does his best to get his daughter out of the situation, but not before she is stripped and tossed into jail. Cliff will fight for her though! Consulting a lawyer (Martin Balsam who sweats profusely), taking it up with the consulate (Charles Napier) and even to reasoning with the head of the prison doesn’t work.

When we see Henry Silva appear behind young Suzi, we know the warden is a bad dude… he even uses escaping prisoners as skeet shooting dummies! Silva presents Suzi stripped and submissive, and has Cliff beaten to show him who the boss around here is. What to do you say to a sadistic Silva? What can you do in the face of such odd?

Call in your football pals in full gear to come use rifles, grenades and bazookas to blow up the prison and rescue your daughter–of course!

And he does. Really.

Fabrizio De Angelis must have wanted to spend even less money than usual, but defines the fun of the action film at the same time. Mildly sleazy with interesting characters for the first two thirds, it’s a good little potboiler with less than zero sense and no logic. But with so many iconic cameos and a strong bit of steel jawed determination from Tobias it zips along until right at the one hour mark…BLAMMO! The football players show up. Now, you have to really picture this. Shoulder pads, helmets…the whole nine yards. But running about with machine guns and high fiving each other. Ernest Borgnine coaches them and they kill dozens of prison guards in gory machine bullet splattered slow motion. The battles go far beyond mere silliness, as swarms of guys line up to get mowed down, but that is the Ludman way… and this is classic stuff.

Outside of the cast, no expense was taken for sure as a generic score tackles any intensity the film may build, the cinematography is flat and there are tons of fill-in sequences of cars driving around (actually views from inside the car!) None of that matters, because for the final third of this film, your brain will flatline and the final down can only come with a miniature helicopter explosion… caused by a punt! Good lord…

A must see, this is perhaps the ultimate ending to the entire Tough to Kill saga, because no action film made after it in Italy would be nearly as bizarre. Thank you Fabrizio, and thank you Larry Ludman, for this film you should be a legend.

Be sure to watch this clip, if you aren't the patient type, go 1 minute in for the ULTIMATE kick!
Posted by David A. Zuzelo at Tuesday, February 05, 2008

'When the going gets tough, the tough get to kill' Banzai Quote ;). The Last Match is AWESOME Tough To Kill Greatness. Strike Commando 2 at the Blog before Strike Commando though !?. I can hear Reb screamin' atcha now ;) . Paul