Thriller - A Cruel Picture / They Call Her One Eye Archive 18

It's back...the never ending (seemingly) quest to get through all the swag I've got collected in my various hard drives. Here are some pages from Cinema X Magazine (Volume 6, Issue 3 to be exact). They were kindly supplied many many years ago by Marc Morris-and sadly went unused. Enjoy! Click the pics for large scans! 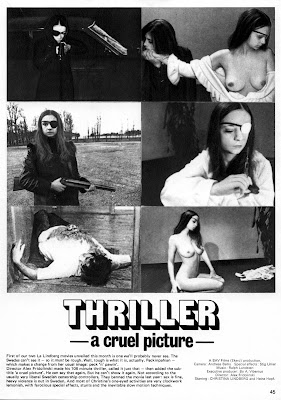 First of our two La Lindberg movies unveiled this month is one we'll probably never see. The Swedes can't see it, so it must be rough. Well, tough is what it is, actually. Peckinpahian which makes a change from her usual image: peck 'n' pawin.

Director Alex Fridolinski made his 108 minute thriller, called it just that - then added the subtitle 'a cruel picture'. He can say that again. But he can't show it again. Not according to the usually very liberal Swedish censorship controllers. They banned the movie last year: sex is fine, heavy violence is out in Sweden. And most of Christina's one-eyed activities are very clockwork lemonish, with ferocious special effects, stunts and the inevitable slow motion techniques.

And here are two pages on WIDE OPEN, a great film from Gustav Wiklund that features several cast members from Thriller! 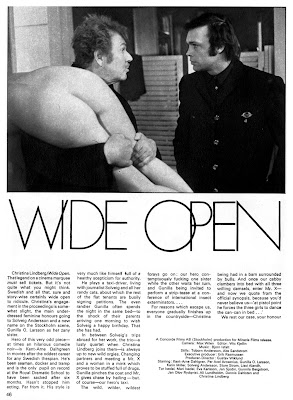 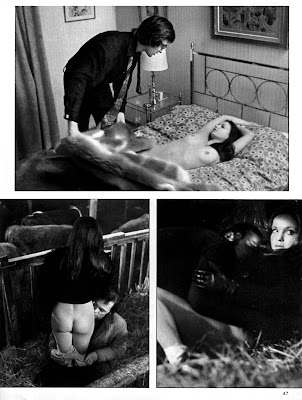 Sweden's new king used to date Christina Lindberg when he was the playboy crown prince. Which was all very nice for Christina and her press-agent; can't have been bad for His Majesty, either. She is known more over here, though, for her sex-bombardment of Leicester-square where one of her films ran non-stop for 46 weeks or more!

No one is suggesting that because of that, La Lindberg is Sweden's new Garbo. Nor that she could one day emulate the brilliance of the Bergman women Ñ Liv Ullman, Harriet and Bibi Andersson, Ingrid Thulin, and the most sensual of them all, Gunnel Lindblom. But yes, we do say, she is most delightfully easy on the eye. Passive, of course. That's something of a trademark about Swedish sirens on the permissive beat. She's a wind-up pin-upÑand someone's thrown away the key. But her mechanism has obviously not yet run down. Not quite. One of her latest films has been banned in her homeland; no doubt in ours too. Her other new project has a title which must have had British distributors fighting over it like housewives in a beef queue. Miracle Films won and are, no doubt, about to lease Lindbergsquare for another eleven months...