Thriller - A Cruel Picture / They Call Her One Eye Archive 11

The Archive continues! I enjoyed my break from this and have LOTS of stuff to share... today is something a bit different. When the surreal tale of Chrome DVD and my dealings with Dolph came to a head in Sweden we met Bo Arne Vibenius. Now, please understand, this film was my grail for restoration, and this film maker was someone I was equally excited to meet.
I wasn't quite prepared for Bo however. After that day I had hoped very much to write a book on him, he is certainly a special character. While things didn't turn out as hoped (and more on that later) I still would love to do a fair write up on him. You have probably guessed the film has remained a favorite of mine-and so has Vibenius.
Even when I'm being mysteriously summonsed by his um....team. 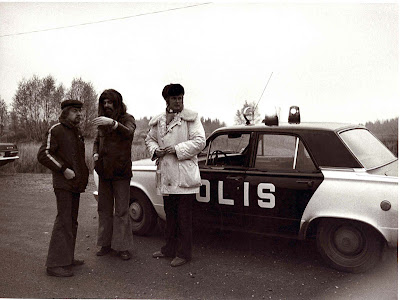 When we first met he handed me a document that he must have typed the night before-ready to pass to a few guys with cash in hand (and sock, and bag) that summed up how he saw himself at that point. I found it so charming that THIS is why I want to continue on and try to tell his tale the right way. Maybe you will as well. Now, English is not his first language-and for all the promotions and stuff we did I'd lend a helping hand in that department, so it is really the spirit of this little diddy that makes it so great. Here is... THE SAGA OF FL.

Once upon a time there was a little boy who loved films most of all in his life.

He saw his first movie 1947, 4 years old, it was about elephants in India and a tiger. Extremely exciting.

Growing up he spent every Sunday at the movies, 1-2-3 movies a Sunday.

In high school he wrote exam work about motion picture history, political film influence, like Triumph of the Will, Leni Riefenstahl's propaganda masterpiece for the Hitler regime.

Never make the mistake to underestimate the power of a good film!!

After joining the army, working as a tank squadron leader, sergeant, he still had his thoughts in films.

Now things started to move fast, Film High School, then assistant to mega star Film Director Ingmar Bergman on 2 productions.
Worked as a production manager for other feature films, then FL sat down and wrote his first feature film, a poetic children's picture including a Beethoven music soundtrack.
Film got positive reviews but flopped totally economic, and our FL genius was broke.

Had to repair his economy, now having responsibility for a family.

Our FL genius decided to write the most commercial film ever written, NO LIMITS!!

The picture which you are about to screen-Thriller a cruel picture- was written in 3 days and nights (those were the days before computers) on an old typing machine.
Our young FL fingers were actually bleeding after those 3 days OF NOT ONLY MENTAL BUT ALSO PHYSICAL FINGERS WORK.

FL now working as head of the film department on a big advertising agency, producing commercials for the SAAB automobile, fixed a loan, used 3 months paid overtime to produce Thriller.
The 6th of October 1972 composer Ralph Lundsten (that has made made the music to Thriller) had a birthday party.

The day after the shootings started. Whole picture shot on location in the Stockholm and Oland area.
Christina Lindberg had been trained by stunt coordinator Lars Lundgren for her fights for over 2 months.

Those sequences were shot in 500-600 frames a second, normal action 24 frames a second.
This super slow motion was shot and created by special for the time unique cameras used by Swedish Intelligence force for filming experiment with missles.

Unfortunately 2 days of super slow motion material was destroyed by the lab and had to be reshot in a new location later.

The team of the picture was very small, Young FL as director-producer, +11 people including special FX guy.
Picture was the second film in the film history to be shot in the Super 16MM format. A modified aaton camera.

Extremely short shooting time, picture edited at night time, music produced during weekends, from start to end of post production including mixing of soundtracks was from October 7th til December 23rd 1972.

The picture was produced in 78 days from the first day of shootings til final soundmix for less than 40,000 US Dollars.

Picture first screened at the Cannes International Film Festival, May 1973.

Thanks to a special promotion the pic was the topic of the film festival, almost riots outside the cinema where the pic was screened.

As a gimmick FL bought all eye patches in Sweden, 11700, put a sticker on the patch, almost everyone in Cannes got one.

Our now not so young FL got a Volvo on loan from Gothenburg factory, packed the car with a color TV set plus a video player, the first available, so called VCR. Rented a flat in Cannes, screened the pic day and nite for international distributors. This was the first time pictures was screened to distributors on video in Cannes.

One morning 07 30 (99.9% of all people in Cannes Festival are sleeping at this time with a bad hangover) 2 pro guys from American International Pictures walked in, saw the pic, gave the best bid, bought the world rights.

Unfortunately, they did not distribute the original version of the pic. They made a quite new version 22 minutes shorter than the original.

This version was on Variety chart-USA most grossing films-June 19th 1974, grossing this week more than Five Easy Pieces.

Our FL not so young anymore, now produced a feature film in Spain, quality rewarded by the Swedish Film Institute, and managed to get a Gold and a Silver Lion at Cannes commercial festival.

Now our FL managed to produce one more totally banned picture-Breaking Point-that was screened 14 years in a row in France, today not yet released on DVD, might come.

FL holds a European record outside the former communist sector, of banned pictures.

Our today old FL is sitting on 8 in his mind great scripts, one is a follow up of Thriller.

Madeleine, the revenge woman in Thriller a cruel picture, is hired by guerrilla in a South American Banana Republic to clean up the country from a fascist dictator and CIA scum and drug barons.
A low budget pic to be shot on location in Columbia, budged 3.2 Million US Dollars.

FL also has a high budget project-RUSSKI VACATION-with a budget of 42 Million US Dollars.

But films with elephants and tigers are also interesting.

Classic. Such an engaging, ongoing tale of the Vibenius ( Still not sure if that is in fact a Swedish word translating into a female body part !? ). Always enjoy reading the saga of this & now wondering if a Swedish Bo Arne jungle adventure movie, with tigers & elephants & 'schtuff', starring Dolph ! ... Lundgren preferably !, is on the cards. That's a pretty darned large slab of greenbacks for future potential projects. Isn't Uwe Boll cheaper !? :). Paul